Literally. The Fourth scored a chilly 104 here in lovely uptown Phoenix. This afternoon it was 108, sez Wunderground. The pool is more like a bathtub than a swimming pool…especially saturated with algaecide, which creates bubbles! 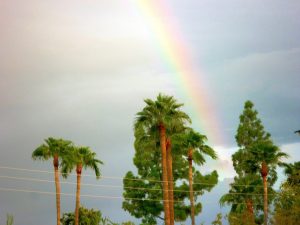 Aaron the Pool Dude’s discovery that the pump was partially jammed with a chunk of palm tree debris seems to have largely solved the London Fog problem. The water has hovered between clear and crystal clear since he fixed that. The problem right now is that it is demanding SO much liquid chlorine that I fail to see how I’m going to be able to afford to maintain our present scheme. Yesterday it consumed a full gallon of chlorine — put in half a gallon in the morning and by mid-day it was just about out. Dumped the other half-gallon in, and by this morning it needed another hit.

I can’t afford to pour a gallon of chlorine in there every day…not at six bucks a gallon. So we need to find some way to stabilize the chemicals. Meanwhile, I have other fish to fry…

And we do mean fry. Today I had to schlep, once again, over to the far west side through the sizzling heat, there to visit the dermatologist again. Her crew thinks it’s too soon to tell whether the most recent little procedure failed (as I think it did) to get rid of a budding skin tumor. They recommended massaging antibiotic ointment into it.

Hm. Never occurred to me to massage a wound. But in fact, it worked, and promptly. It’s already feeling a little better and looking a lot better.

Finally managed to extract a prescription for some goop to whiten the brown spots all over my face. That, she called in to the Costco pharmacy. Schlepping way to hell and gone down there through the unholy heat was more than I could face, so that will have to wait until I can get into Costco for a regular shopping run.

Tomorrow I have to traipse almost as far in the opposite direction, to the hair stylist in Scottsdale.

The effort to find someone closer and cheaper failed. I couldn’t even figure out how to get in the beauty school’s front door: apparently they’re closed to the public. So went across the street to the beauty salon in the run-down Albertson’s shopping center.

LOL! “Run-down” doesn’t describe it. Would you go for dark? How about dank? Decided against making an appointment there.

Helle’s Belle’s. Even though Shane is spectacularly expensive, with my hair halfway to my fanny I only need a trim once or twice a year. I can afford sixty bucks, at that rate. His salon is beautiful…and so is he. And he does a reliably excellent job.

So…in short: I have gotten nothing done today except running around through the heat and dumping chlorine bleach into the swimming pool. Whee!