Holy mackerel, to coin a phrase… Our Beloved Cleaning Lady didn’t show up at her customary time on Monday. WonderAccountant, who shares this extraordinary woman with me, said BCL had called her and said her husband is sick. As in very sick. WA gathered he’d had a stroke.

Well. This is not good all the way around. We do not know BCL’s status, but we do know she has a middle-school aged daughter, and we do know she works like a horse. And we prize her efforts above just about everything else. If BCL can’t work because Mr. BCL can’t work, they’re in deep trouble.  We stand by, waiting and wondering what we can do to help. If anything.

In the UNhelpful department, I had already begun to think that I cannot afford to continue the biweekly cleaning service, and that I either need to cut her visits to one a month or just let her go altogether. I hired BCL during the Year of the Surgeries, when there wasn’t a snowball’s chance that I could clean a floor or even so much as dust the furniture. She proved to be so wonderful — and the Year made it so obvious that I don’t have many more years in which I will be strong enough to scrub 1868 square feet — that I decided to keep her on.

Now, though, several years later: inflation rises but Social Security and investments do not keep up with it. It’s March: I don’t take a required minimum drawdown until August at the earliest, it costs about $2,000 a month to live and run this house, and I have $1268 in the checking account. Somethin’s gotta go, and I had already decided it was gonna be BCL.

Deeply, truly, profoundly do I hate housework. God, how I hate spending three-quarters of a day knocking myself out scrubbing and rubbing and scouring and vacuuming and mopping and laundering and ripping off sheets and putting on sheets and ohhh HELL! Getting rid of the cleaning lady is not a pleasing prospect.

However and come to think of it…

As I contemplate this predicament, it occurs to me that…hey, Estúpida! You do not have to clean the whole damn house on a single day.

Cleaning this house only entails about a half-dozen tasks.

These figures may be optimistic: they only add up to about 2 1/2 hours. It takes BCL three to four hours to clean this place, and it typically takes me about four hours, too. But still: take 4 hours x 60 minutes and divide by 7 tasks, and you get an average of 34 minutes per task. That’s absurd, because the only one of these chores that takes anything like that much time is vacuuming and mopping 1868 square feet of tile flooring. In fact, at least six of these seven tasks will take you no more than 20 or 25 minutes. Apiece, that is.

WHAT IF, it dawned upon my fevered little brain…WHAT IF you did just one task a day? Over the course of a week, this would add up to cleaning the entire house, and it would not knock you out. Not only that, but if you were doing one and only one of these things each day, then every housecleaning job would get done once a week, instead of only once every two weeks, as is happening now. The house would actually be cleaner, and it would cost you nothing.

The only one of these chores that’s very difficult is vacuuming and mopping the floors…but in the absence of the heavily shedding Cassie the Corgi, the only floors that really NEED to be mopped frequently are the kitchen and the closet-sized bathrooms. If all you were doing was vacuuming the rest of the house…come the mopping chore you wouldn’t be working very hard.

The other job that’s a PITA is changing the bed, because I stupidly let myself be talked into buying one of those extra-thick, cushion-topped mattresses, along about 15 years ago. NO sheets, not even extra-deep sheets, fit the damn thing. So making the bed is quite the little back-breaker. Hence: yesterday’s annoying search for a new mattress.

Okay, so I divvy the seven chores over five days, leaving myself two days in which to goof completely off, and get started. Yesterday: vacuum the floors. Discover I hate and despise the new Shark. Having dragged its parts out of their box and put them together, I discover the effing thing SWIVELS. Yes. Stupidly, Shark has designed the thing so that its head — the part with the beater brush that rolls along the floor — swivels at random, threatening to yank your shoulder out of joint if you’re not very, very careful. Why anyone would want a vacuum to do such a thing escapes me. But apparently someone does.

This adds another chore: take the thing back to Costco.

At any rate, yes, it takes all of about 30 minutes to vacuum the whole house, and maybe another 10 minutes to Swiffer under the furniture and behind the doors.

Meanwhile, the cleanerly banging around reminds me that I need to do something more about the moths that have taken over the pantry cupboard. 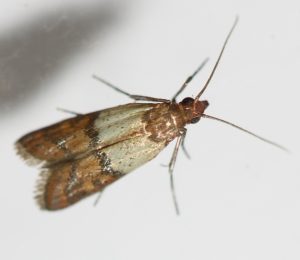 Some months ago, one of these little gals flew out of a bag of the fancy dog kibble I use as doggy treats and to supplement the real food I serve up. I thought UH OH…. But was busy and just let it go. Mistake.

I keep a jar of this kibble in the pantry, for twice-daily use. Of late a tribe of Indian pantry moths has visited the kitchen, and so I was moved to track them down. Realized they had infested the pantry en masse. A friend of mine had remarked that she had inflicted moth genocide with some moth traps, something I’d never heard of before she described the things. So, ordered up a box of these: 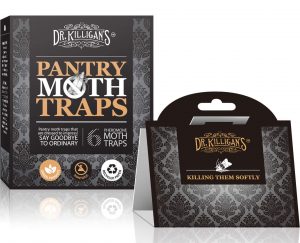 Their trick is a layer of extremely sticky gunk spiked with sexy moth pheromone. They target the Indian pantry moth, and by golly, they DO work. The package arrived late yesterday afternoon, and by the time I got back from choir, a few hours later, they’d already caught five of the little buggers.

So, today being “Clean the Kitchen” Day, I decided to pull everything out of the pantry, empty all the food storage jars and run them through the dishwasher, and place any food packages that were not obviously infested in the freezer. (Adult moths are at the end of their lives and will fly around mating and depositing eggs for only a couple of days, but their grubs, which do the damage, live about 28 days.) Turns out that the little worms will die after about a day and a half at freezing temps. So…drop every bag of kibble in the freezer for about three days before you open it, and your problem is solved. Or at least headed off at the pass, to some degree.

You really should keep grain products such as flour and cornmeal in the freezer. Processed products such as pasta and crackers should be stored in closed containers. This will keep the moth issue under control pretty well.

At any rate, the clean-up entailed pulling everything out of the (large!) cabinet, washing all the plastic shelf liners in a hot, strong solution of Dawn detergent, dumping out any stale or even slightly suspect food and running the containers through the dishwasher, wiping down all six (large!) sliding shelves with Dawn solution and drying well…and on and freaking on.

In the process, I found a LOT more moths. The trap catches only males, which are drawn by the alluring parfum de lady moth and so taken out of the reproductive cycle. Catch all the males, and you end the females’ egg-laying prowess. Apparently there were plenty of ladies hanging around. Also found a fair number of grubs and a fair amount of grub mess, now all scrubbed clean.

The upshot is, the kitchen is now pretty well clean. Still have another load of retrieved dishes to run through the washer, along with the stove grids. And still have to replace the stuff in the pantry. But once that’s done, the basic kitchen-cleaning chore is done (stove clean, counters clean, other stuff clean) AND the largest cabinet in the kitchen is cleaned with the vengeance.

4 thoughts on “Housecleaning and Moths…Oh, My!”