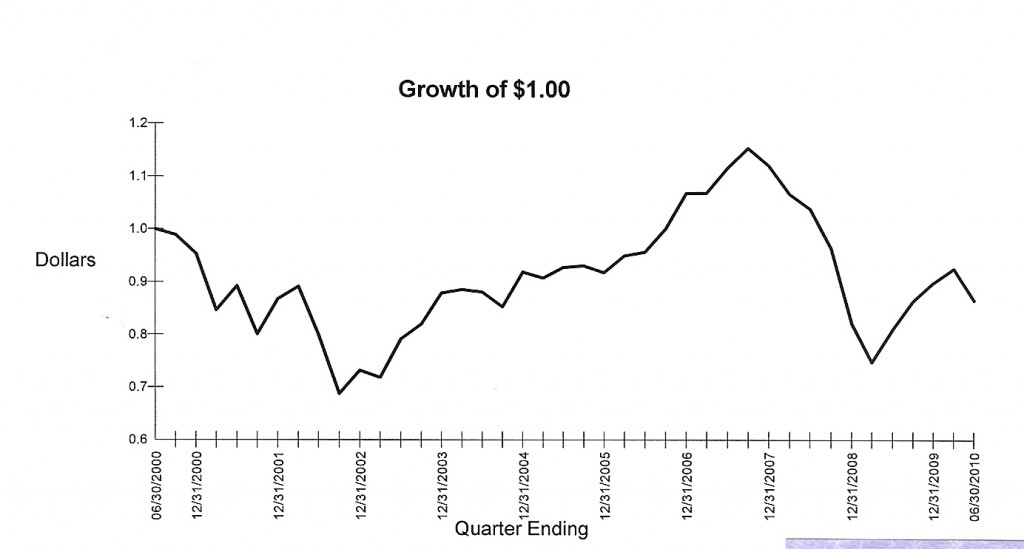 Be afraid, my friends. Be very afraid. If you have no fear, click on the image above for a larger, clearer picture of what’s slouching toward Bethlehem.

That thing came in a report from my money managers today. It tracks the value of a dollar invested in my portfolio from June 30, 2000 forward.

Now, if you take a ruler and lay it horizontally across the page so that it passes through the start point on the left-hand side of the page and stays parallel to the x-axis, you will see something alarming. In all that long, eventful decade, only a tiny little nubbin pokes up above the top of your ruler.

Suspicions confirmed. Some time ago, it occurred to me that the amount in my investment account was about the same as the amount I recalled coming away with from the divorce, some 20 years ago. Statements from those days have been packed away, and offhand I couldn’t say where they are. They may even have been discarded. But the figure that sticks in my mind is…well, just about the figure on the bottom line of the statement that comes in the mail once a month.

Still think long-term investment in the stock market is the way to grow your savings? Read on…

On the phone with the investment guru:

“Is there a reason to believe keeping money I will need to live on for the rest of my life (which we may sincerely hope will be short) in the stock market is a good thing to do? Unless these funds grow or at least quit losing money, there won’t be enough for me to live on. I can’t keep on forever putting in 16-hour days, 7 days a week to scrabble together $15,000 a year, which is what happens when  you’re ‘self-employed.’

“Should we be considering some other investment strategy? Maybe we should take a chunk of dough and pay off that damn mortgage on the downtown house, so I don’t have to worry about where 10 grand a year is going to come from to pay for it. If M’hijito pays rent to me, then about $600+ a month would come from him to me, instead of me having to fork over $800 a month. After the kid moves on, I could probably rent that place for $1,000 a month. Or sell my house and move into it, banking $235,000 in the exchange.”

Well, of course, the very idea is anathema to an investment manager. Put your money in real estate, and he doesn’t have anything left to manage!

The conversation that ensued was eye-opening. The firm has moved large amounts of funds into income-producing instruments, which my guy says are returning 7 percent just now. So even though the apparent value of the securities appears to drop, they’re still bringing in cash.

Couldn’t prove that by me, but then you can’t prove much by me.

He then said that the consensus among his partners is that the future of investing is off-shore; that effectively the U.S. economy is done, and smart money is going to emerging economies. He believes China’s economy will surpass America’s within ten years. The jobs we have lost in construction and manufacturing—where the bulk of job losses have been—will never come back. Jobs in the service sector, which is where most of the remaining employment resides, are poorly paid and will never be anything but poorly paid.

If you thought the middle class in this country is disappearing, you thought right. A young person, he suggested, would do well to look for employment overseas. Americans are in demand in Hong Kong, he said, although given Americans’ reluctance to learn languages other than English, Canada or Australia is probably a better bet. He would, he added, seriously consider moving to Canada if he were younger (and hadn’t yet started his family and career) or older.

Not scared enough? Well, put on your 3-D glasses and look up your address on Zillow. For jacking up your adrenalin level, that beats any chainsaw movie.

My house, whose value held steady through the bubble-burst at $235,000, has suddenly dropped to around $200,000. The downtown house house is between $50,000 and $60,000 underwater. Real estate values have not stabilized; they continue to drop steadily. When I mentioned this to Investment Dude, he said yeah, his place also had fallen in value even more than it already had, which was plenty; he and his wife managed to get a refinance, but only because no appraisal was required—the lender accepted a recent valuation. If they’d had to have the house appraised, they could never have gotten a new loan.

So…how has your investment dollar been doing? Dollar, heck… Can you spare a dime?