I like to work The New Yorker’s online jigsaw puzzles, which derived from the magazine’s covers dating back to the 1920s. Over the months of time wastery, I’ve kind of marveled at the differences in the cover prices on this magazine. DXH and I used to subscribe to it, throughout the time we were married — along with a bunch of other middle- to high-brow periodicals. Contemplating the completed jigsaw covers, it struck me that the price of the thing has gone up an enormous amount over the years, presumably because of inflation — so much so that today I wouldn’t even think of subscribing. But, wonder I, is that correct? Or am I imagining some sort of Inflationary Chimera? Welp…check this out: 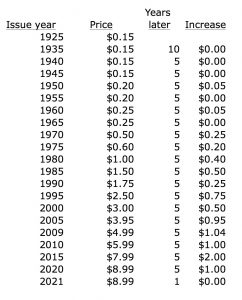 Can we track the progress of these price increases? 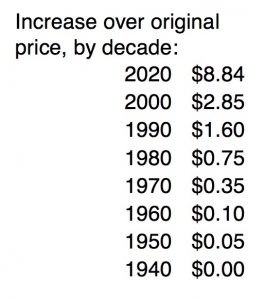 To look at it another way, today the magazine costs SIX TIMES as much as it cost in 1925.

Is it six times better? Personally, I kinda doubt it. When was the last time you saw a John McPhee article in that rag? Or anything on a par with McPhee’s work? Today when you open it, what you find is something more like a standard city magazine than a middle-brow boulevardier’s journal. It starts out with restaurant reviews and then tells you all about the local entertainment. But reportage raised to the level of art? Not so much.

At nine bucks an issue, I just couldn’t afford the thing. It would be SO much cheaper to drive over to the library once a month and read the latest copies—or to subscribe to the library’s online magazine service—that it would be absurd to pay for it, even if I could afford it.

That would make the magazine a bargain. Still can’t afford it, though.