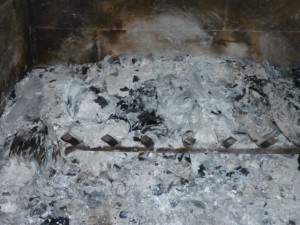 The Cremains of the Day

Before I started, a four-drawer file cabinet in the garage was chuckablock full of old records, and the five file drawers in my office stuffed to capacity.

Now, after a good six hours of feeding paper into the fireplace, after the liberation of 73 manila file folders and 33 hanging files (not counting the ones I reused on the fly), the garage file cabinet is again chuckablock full, mostly with different records. The firebox is filled with ashes. But at least there’s now a little open filing space in the office.

They say you should keep tax-related documents for seven years and tax returns forever. Highly problematic:

a) If you have a side income from self-employment, where the heck are you supposed to find room in your house to store years’ worth of related paper?

b) Once you’ve stuffed seven years worth of trash in a file cabinet, you tend to forget it. Hence, paper dating back to the Pleistocene, fossilizing in the garage.

Some of this stuff should’ve been donated to a local historic archive, not reduced to ashes in the fireplace.

You know, some things could come back to bite, even after the magical seven years have passed.

For example, late in the 20th century, a man whose last name (allegedly) was the same as mine somehow convinced my bank and a bunch of his creditors that I was responsible for his debts. I’d never heard of the guy.

Should I throw out all the correspondence, all the paper trail, all the records of how I went about arguing that I was not a deadbeat? Or at least not that deadbeat?

Then there was the time I made a job offer, with the dean’s written permission, to the Southwest’s pre-eminent graphic designer of publications. She, desiring to do the kind of work our office did, turned down a far better-paying job that would have had her doing advertisements and brochures. Then, after she had passed up the other, far superior opportunity, the College reneged! On a written job offer that she had accepted! In writing!

Well, she hasn’t sued yet, though she certainly should have. But I still have all the documentation. What’s the statute of limitations on civil suits, anyway?

Then there was the endless, incrementally bitter slow-motion war with My Bartleby. My ass is covered there by a 200-page daily journal, written at the behest of the College’s HR representative. This monster fills two hanging file folders and a CD-ROM. Should I keep all that drivel?

She hasn’t tried to make any trouble yet and probably won’t. On the other hand, Bartleby is even crazier than I am. And I’m capable of anything.

In the crazy old lady department, I undoubtedly go way overboard with this business of saving documents. It’s a habit acquired from ex-DH, who, as a lawyer, advised me that we should save every scrap of paper that had anything to do with anything. He wasn’t kidding. At the time I left, he had a collection of canceled checks that dated back to before the start of our 25-year-long marriage. I figured he must know something, he being a fancy lawyer, and so I went forth and did likewise.

And I do have to allow, it was mighty gratifying to be able to produce my original pay stub that time ASU tried to claim I had been working there only fifteen years when actually I’d been there sixteen.

I suppose it only has to happen once.

Ah, well. It’s back to work. A stack of incoming paper sits on my desk, waiting to be handled, acted upon, and filed.

Am I alone with this conundrum? How much paper do you keep, and for how long?