This one is probably for wimmen only…although any of us, regardless of gender, can bash a toe hard enough to break a nail back below the quick. For women, the following repair project will work on hands or feet; for men, probably it’s only good for toenails, and that only if you never take your shoes off around the guys.

One day when I was a little kid, I was drying dishes (in those days there were no dishwashers :roll:) and I dropped a dinner plate edge on, right onto my big toe. Holy mackerel, did that hurt! It cut the nail bed about halfway across the toe. Amazingly, the toenail didn’t fall off, though my mother luridly predicted that it would. But to this day, a transverse scar under the nail leaves the nail itself prone to cracking horizontally. Usually this is a minor annoyance, but recently I caught the toenail on something, once again splitting it and lifting it bloodily off the toe.

Annoying to the tenth power.

The nail didn’t break completely off. I wanted to keep it in place until whatever was bleeding underneath healed and until the undamaged nail could grow out over the sensitive quick, about half of which was now exposed along the top of the toe.

Thought about sticking it together with Superglue, a common manicurist’s trick: glue a piece of tissue over the split; then layer on the paint. However, the injury hurt, and that didn’t incline me to add more pain by getting a toxic glue into it. What to do?

The fix was simple:

The fracture lines lay at right angles to each other: the horizontal crack, plus a vertical break extending to the top of the nail. Almost 1/4 of the total nail surface was broken. Half of that was busted loose, and the other half was pulled up from the nail bed.

Soaking the foot in warm water removed most of the blood. Then I took a pair of curved manicure scissors (any type would work, though) and shaped a piece of satin-finish Scotch tape to fit the nail. The “satin” variant looks more convincingly like one’s nail than the shiny stuff, and I suspected it would tolerate a coat of nail polish better, too.

Cutting it to fit the entire nail, rather than just to form a patch over the break, is more likely to hold a large fractured area in place. And, as it develops, if you smooth the tape down carefully and tightly, you can paint over it and not have any unsightly seams showing. 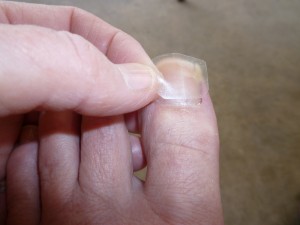 Before applying, hold the patch up to your nail to judge the correct size. Trim as needed to fit the size and shape of your nail. Then carefully lay the shaped piece of tape over your nail and smooth it down evenly from the tip to the cuticle, gently rubbing out any air bubbles. To some extent, you can lightly file along the top to smooth to fit — but use a very fine emery board don’t get carried away with this.

Now you  have a moderately sturdy patch. Because it covers the whole nail, it’s fairly unobtrusive.

The final step is to seal the thing in place. I decided not to apply color, partly because I wanted to keep an eye on the injury and partly because I figured removing this lash-up could be messy. (Surprisingly, it’s not!) For a significant split, use the toughest nail-protecting goop you have around. I happened to find this stuff in a drawer:

Hard-as-Nails, available in any drugstore’s cosmetic section, is pretty good. You may have another favorite. I don’t know that it’s worth trying to secure it  further with products that claim to contain fibers, but if that’s what you have around the house, it probably won’t do any harm. Apply two coats, letting the first coat dry well before putting on the second layer.

Overall, the effect is not bad.

I expect that if your feet had about forty years’ less wear and tear on them than mine do, the effect would be considerably better. 😉

This is not a long-term fix. It works to hold the nail together for about a week. Then the process needs to be repeated. But I think the repair will hold together, given an occasional remake, until the broken part grows out.

Getting this stuff off is incredibly easy if you use acetone polish remover — the same stuff you use to soak acrylics off. Acetone dissolves Scotch tape! Put enough on to wipe off two layers of goopy Hard-as-Nails, and it’ll take the tape right off with it!

Gents: note that the clear stuff women paint on their nails is day-glo shiny. Even though the gunk is clear, it’ll be obvious that you have something fay on your paws. Some types of clear base coats are matte, but finding them would not be easy, at least not without the help of a manicurist who knows her products. Even then, I expect any type of clear coating would be pretty obvious. So if you just must fix a busted toenail like this, stay out of the locker room until you’ve recovered from your dire injury!

If the break is likely to snag on your clothes or in your work environment, it’s probably more manly to keep it covered with a Band-Aid until you can cut it back without aggravating pain or causing further harm. To prevent lifting, you could layer a piece of Scotch tape over the broken nail, as described above (sans the paint) and then disguise it with a Band-Aid.