I hate Facebook Ads. I especially  hate the ones disguised as posts forwarded from or recommended by my friends. As soon as Facebook figured out how to defeat Adblocker, my FB feed was swamped with annoyances —  about one ad for every three messages from friends or acquaintances. Then I figured this out: though you can’t get rid of the damn things, you can vastly reduce the number of Facebook Ads you see, at least temporarily.

Here’s the trick. When an annoyance comes up, click on the down arrow that appears in the ad’s upper right-hand corner.

A menu with several choices will appear: 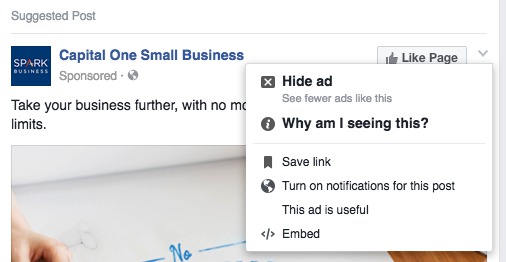 Select “Hide ad.” Another menu will come up:

Finally you will see the annoying message above. Of course, you do not want Facebook to show you “better” ads, because there’s no such thing as a “good” intrusion.

Now, here’s the thing: you can rid  your feed of almost 100% of Facebook Ads — temporarily — if you run down the page  (whatever it’s called in Facebook-babble: the page that comes up when you click on “Home”) and do this for every single ad that comes up. If you tag every ad as “it’s not relevant to me,” you’ll find that almost no ads will appear while you’re visiting Facebook.

This lasts for about a week to ten days. Then you’ll start having to “hide” ads again — but there’ll be a lot fewer of them.

Will this eventually get rid of Facebook Ads in your feed? I don’t know. Could be. Or…sooner or later, Facebook may tumble to this and negate your option to “hide” ads. That, I suggest, is the time to quit patronizing Facebook altogether.

This strategy does not get rid of the ads that appear in the right-hand sidebar. However, if you’re like me, you’ve already learned to mentally filter out sidebar ads, thanks to the nuisance that is Google Adsense. I don’t even see ads (or much of anything else) in a website’s sidebar. You can train yourself to do this by focusing solely on the content that interests you, which usually appears in the center column.

What will happen if you click “I keep seeing this” or “It’s offensive or inappropriate”? I don’t know.

Facebook claims it will quash content that you find “offensive,” whatever that means. But most FB ads are not naughty in any way — they’re just intrusive. Repeatedly labeling ads for fabric softener or some such offering as “offensive” may get YOU in trouble. As for “I keep seeing this”: Suuurre! Facebook and its advertisers give a damn whether you don’t like seeing some ad over and over. Elephants are pink, too. 🙄

Facebook tells its advertisers that if a user clicks “it’s not relevant to me,” the ad’s “relevancy score” drops:

If a user submits feedback on your ad and reports It’s Not Relevant to Me, your relevancy score will go down. Conversely, people who engage with your ad cause the relevancy score to go up. If your ad’s relevance score is high (with 10 being the highest), your ad is more likely to be served than other ads targeting the same audience.

This suggests that by labeling an ad as irrelevant, you’re likely to cause it to appear less often in your feed. It also is less likely to appear to other people that Facebook deems are “like you.” So with any luck, maybe the damn thing will appear less frequently in everybody else’s feed, too.

Take a little time to make your FB experience more enjoyable. Who knows? Maybe it’ll help do the same for all of us.