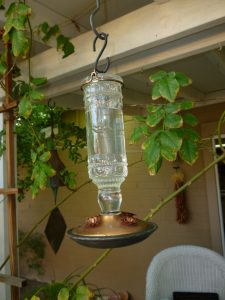 Yesterday I went to refill one of the hummingbird feeders near the side deck. Hadn’t seen any hummers around lately, even though it was a third full, so I figured the sugar water had gone stale. It was “stale,” all right: when I unscrewed the bottle I found about a zillion drowned ants clogging the bowl!

The ladies had made their way to the rafter, down the feeder’s hanging rod, down the jar, and thence into the little holes the hummers use to suck up the fake nectar humans like to put out for them.

There’s an easy way to stop this incursion. All you need is the lid from a can of spray paint, some vegetable or olive oil, a hammer and a long, sturdy nail, and a little tape.

Take a look at your spray paint lid: it has a cup in the center that snaps over the can’s sprayer. 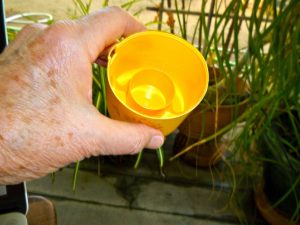 This forms a kind of moat between the inner lid and the outer wall of the can’s lid. That moat will hold your secret weapon.

First, take your nail and place it dead center in the middle of the can’s lid, on the top. Gently tap it with the hammer until it breaks through the plastic.

Now push the lid onto the feeder’s hanger, so that the top of the lid faces the ground and the “moat” faces upward.

Tape the lid firmly in place on the hanger. I’ve used black electrician’s tape and outdoor double-sided tape — either works well. Avoid masking tape and scotch tape, which will degrade in weather.

Adjust the lid to make it sit as level as you can — it doesn’t have to be perfect.

Now pour some vegetable oil or some olive oil into the moat section of the lid. No need to fill it all the way up. All you need is enough to cover the bottom of the cap. If the lid doesn’t sit level, pour in enough oil so that the moat contains at least a few millimeters of oil in all parts. 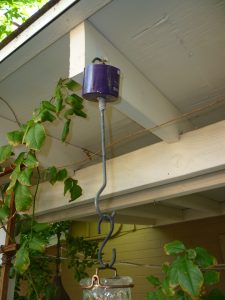 Hang the thing where it where you want it and then hook your feeder to it.

Ants will not cross the oil moat!

This device lasts a very long time. The reason my feeder had ants is that I had removed the one I’d installed several years ago. I’d forgotten about it until I went to do some gardening this spring. When I took a close look at it, I discovered the oil had long since dried up, forming a mummified layer on the bottom of the spray-can lid “moat.” Thinking (wrongly!) that it must not be doing much good, I took it down. And was too lazy to build a new one.

Try this. It works. It’s easy. 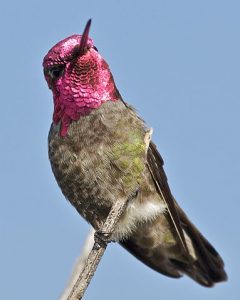