So I’m sittin’ around here (actually, slamming around doing some housework and unplugging the kitchen drain) when for unknown reasons the brain decides to reflect on bygone quarrels between my mother and my father over the way she used to spend “his” money.

In those days, it was almost impossible for a woman to get a job that paid more than pocket change. At one point my mother got a real estate license and went to work for a broker who was peddling property at the Salton Sea (we lived in Southern California at the time) — it was quite the little scam, from which she made approximately nothing. Actually, I believe her take was in the negative numbers, by the time you added up the gasoline and the cost of the damage to the car’s paint from sandstorms out on the desert. So in fact, whatever we lived on was what he earned.

My father deeply resented the way she would spend “his” money, although we did not live high off the hog in general. We rented mid- middle-class apartments, drove Fords, never traveled, did not go out to eat, did not gallivant to speak of. But she did like to buy clothes and makeup and she did like to shop in department stores. One time when he was home from the ship he happened upon a bill from a department store, the result of which was quite a sh!tfit, in which he ordered her to “stop spending my money.”

She used to shop in this department store, not far from where we lived…she was a hopeless sucker for the cosmetics salesladies. It was a nice middle-class store, but nothing swell-elegant. It was probably a Broadway: on the order of a Dillard’s. Not I. Magnin or Saks, but not Penney’s either. 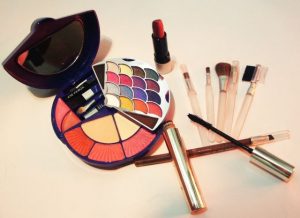 She liked to wear lots of makeup and lots of perfume. Because she smoked a LOT, her skin was a mess to begin with and she needed perfume to temper the tobacco stink. And we’d spent 10 years in Saudi Arabia at a time when people imagined that a “healthy tan” was good for you. This meant her face was your basic shoe leather, the result being that every morning she would sit down in front of her dressing table and coat herself in layer after layer of moisturizers, cover-ups, foundation, rouge, and powder. An easy target for a sales pitch, she never understood (or rather, she refused to believe) that there was essentially no difference between a cheap make-up like, say, Coty, Avon, or Revlon and pricey stuff like Estée Lauder, and so she would allow herself to be talked into buying a whole line of spectacularly expensive products.

Know how much a hundred bucks in 1961 is worth in 2020 dollars? Eight hundred sixty-nine dollars and twenty-nine cents!

No wonder the poor guy blew a gasket! That would have been as much as he earned in a month — maybe more — going to sea full-time! As a Merchant Marine commander with a license to sail oil tankers of any tonnage on any ocean…

When I went to the University of Arizona in 1962, my father gave me $1000 a year to live on. It was enough to pay my tuition, the dorm rent, books, and food…with a little left over for clothes and incidentals. In 2020 dollars, that would be almost $1,000 a month, though after my freshman year tuition was essentially free. So…just imagine how outrageous spending a month’s worth of that on make-up would’ve been. 😀

Strange, what crosses your mind when the place is quiet and you have nothin’ else to think about but cleaning the kitchen counters…