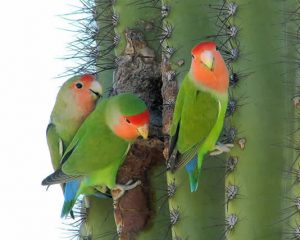 Two of these little cuties showed up at the backyard feeder this morning. They’re rosy-faced lovebirds, formerly called peach-faced lovebirds: a type of African parrot imported for the profit of pet stores.

They’re adorable as can be, charming…and a squawking invasive nuisance. They gather in flocks, and if they take up residence in a tree outside your bedroom window, you will be rising with the sun each day, when they do. People think they’re harmless, but I would suggest, just from today’s observation, that they are not.

With only one of these small birds perched on the feeder, none of the whitewings would go near the thing. Neither will the finches. They were afraid of that parrot — and twice as scared of two of them. See that vise-like beak? That thing, I would suggest, is capable of removing a dove’s leg in one snap. Doves, interestingly, learn quickly and somehow manage to spread the message among their cohort. As soon as the first parrot showed up, the whitewings took off and refused to revisit the feeder. They perched on the roof, but would not come into the yard.

Hm. By way of experiment, I tossed a few handfuls of seed on the ground.

Ruby thought that was grand. The doves wouldn’t come to ground, but she sure would: she ran out there and started scarfing the birdseed. 🙄 How does this dog do it?

Called the dog. She was willing to trade a few bites of kibble for the birdseed bonanza. A few of the doves ventured in, but most kept their distance.

A foreign bird that chases the native whitewings out — a whitewing is a large bird, btw, much bigger than these little “lovebirds” — is not a benign invader.

After a bit, Ruby noticed someone walking their dog past on the front sidewalk, causing her to fly into a frenzy. This scared all the birds off, but since the whitewings are accustomed to Ruby’s stürm und drang and realize it signifies nothing, the doves quickly re-established their claim to the feeder. The parrots, mercifully, did not reappear.

Speaking of invasive species, this morning I realized that of late we’ve seen a lot fewer drug addicts stumbling around the neighborhood. They still infest the “convenience”-store and gas station parking lots at the corner of Gangbanger’s Way and Conduit of Blight, but they don’t seem to be hanging out as much in the residential area.

That said, though, neighbors have been complaining of encampments in the park, over in a nook right behind a bundle of $700,000 homes. As you can imagine, these campsites are not welcome.

All the city has to do, of course, is set the park’s sprinkling system to come on for a few minutes a couple times during the night, and that would get rid of the bums. But…the truth is, the city doesn’t know what to do about the homeless drug addicts, and so the default strategy is to just let the tax-paying homeowners live with them. 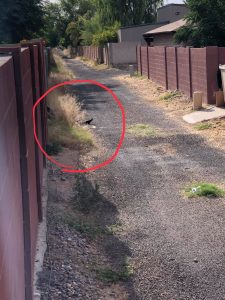 One of these worthies has taken up residence in the alley that runs behind the Funny Farm. That, presumably, would be the one who’s using the berm along my wall as her toilet.

This morning on our 5 a.m. doggywalk, we encountered only one bum, a big bull of a man bicycling up the border between lower and upper Richistan, conversing with himself as he rolled along. 🙂 Hey…who else is there to talk to at that hour?

He seemed a little unnerved by me and my shrimp-sized dog, possibly because I’ve taken to carrying a hefty shilelagh with me. But…seriously, dude? What do you think a little old lady and a 23-pound pooch is gonna do to a big bruiser like you?

LOL! Yesterday whilst cruising around the city, I spotted a shady-lookin’ character riding a kid’s bike and carrying two bicycle wheels looped over the handlebars. He was headed toward a pawn shop.

Yeah. Well. You’ve got to pay for your dope somehow. Our beloved brethren…