Good grief…i think i just saved myself a nice little wad of cash by NOT (i hope) buying a new iron. Maybe.

So last night I’m pressing the Costco Blue Jeans Collection when I notice this faint, tingly bzzzzzzt sensation as my fingers rub lightly against the inside of the iron’s handle.

Dork around a bit, test this, test that, thinking it’s gotta be my imagination.

No. Apparently not. Unplug the iron: no bzzzzt sensation.

So I figure the beloved Shark iron, which I’ve had so long the paint has rubbed off parts of the handle, is giving up the ghost and wants to take me along when it moves on to the Next World. Decide I’ll either order another one from Amazon in the morning or run up to the Target, which is where this one came from.

Examine the offerings at Amazon.

Holy shit! Have you looked at the price of irons lately? Check this thing out ! What do they think it’s made of? A hundred and twelve bucks, marked down from TWO HUNDRED BUCKS, for a freaking steam iron? 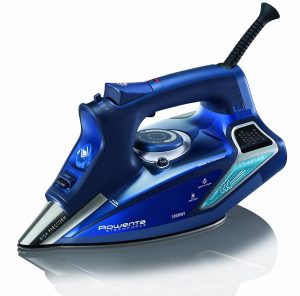 I had a Rowenta at one point, back in the day when I had a job and could afford to spend too much on stuff like this. They are very expensive irons, and they’re not worth the extra money. On mine, the cord attached at a strange angle so that you could not set it down on its heel on the ironing board while you adjusted the position of the rag you were pressing. From the looks of this one, it appears they haven’t fixed that design flaw.

Replaced it with a Sunbeam, which was cheap and functioned like a two-dollar cookstove: it got so damn hot I couldn’t hold onto the handle. Out with that.

Had a Black & Decker at one point. Don’t recall what was wrong with that, but I didn’t like it, either. I think it crapped out early on.

Then I got a Shark, and I’ve really loved it. It gets hot quickly, it steams efficiently, it does the job, it does not singe your hands. The only complaint I have is the God DAMNED automatic shut-off, which turns the thing off every time you leave the room to go to the toilet or pour yourself a cup of coffee. That, however, is apparently Big Brother’s doing, not the manufacturer’s.

But evidently the quality of Shark steam irons has collapsed. Even the ones with five stars at Amazon are roundly hated by upwards of 25% of buyers. So…that is not a good thing.

Tried to track down irons made in the USA. Couldn’t find a trace of ary a one. Searched for irons made in Germany: yeah, Rowenta. Moving on.

The only iron available at Costco goes for an astonishing $130. For an iron????? What do they think it’s made of?

That’s cheaper than the identical model at Amazon, where it goes for an eye-opening $150.

Apparently all affordable irons — by that we mean those in the $30 to $50 range — are now made in China. Thank you very much, honored leaders and globalization enthusiasts.

So I figured I’d drive up to the Fry’s market on the fringe of Richistan, whose offerings in the small household appliance dept rival or exceed Target’s and whose location does not require me to dodge bums and purse-snatchers between the car and the entrance.

I do not want to go out. I’ve got a lot of other things to do today. The prospect of driving across the city is never pleasurable, and having to put a lot of other chores in abeyance to run out and shop for a steam iron is…well…UGH.

So before getting washed up to go charging out into the traffic, I decided to plug that iron into a different outlet. Could it be possible that the issue had something to do with the power strip? (Not bloody likely…but I’ve got nothin’ better to do…) Schlep into the bathroom, stick its plug into an outlet, and turn it to Blowtorch.

But it has no water in its tank.

Pour in a cupful of water. Turn it back on to Blowtorch.

Nothing. No indication whatsoever that the thing is getting ready to electrocute me.

So. I don’t know what caused that. The jeans I was pressing were sopping wet — fresh out of the washer. Some time back, I learned you can iron jeans while they’re soaking wet, hang them up damp, and have them come out looking the same as if you waited until they were dry to iron them. Maybe ironing soaking wet fabric with an electric appliance is ill-advised?

WhatEVER. I’ll try ironing the other three pair of (dry) jeans that await my attention, and if the thing doesn’t threaten to electrocute me, it goes back into its accustomed place in the linen closet. Thank goodness.

Can you believe that price on the only iron available at Costco?

Lately, I’ve found myself patronizing Costco a great deal less than normal. And I’ve also found that I seem to be spending a lot less than I usually do during the course of a month.

True, the refrigerator is pretty much bare (makes it easier to clean the thing…). But I’m not out of food: there’s plenty of meat, fish, chicken, and veggies to sustain me and the pooches.

The problem with Costco is that it’s Impulse Buy Hell. No matter how determined I am to stick to a shopping list, I can not get out of that place without buying something I hadn’t planned on buying. And that ratchets up the spending fast.

Before Costco dumped AMEX, about $1200 was typical. So the Visa bill is showing, effectively, nothing but Costco charges. The only non-Costco charge this month was a bag of expensive organic zooom-bah dog food. So that’s a total of $880 in household shopping costs for November. So…about $400 less than usual. Hmmm…

So I think it’s a good idea to restrict trips to Costco: go there to buy only those things you can’t easily get somewhere else.

When you come right down to it, though…that ain’t much. Just about everything else can be purchased in regular grocery stores.

Problem with the lifetime supplies is that by definition, one such purchase should last you for a long, long time. But you find yourself buying lifetime supplies every time you go into the place. And if you go in there four times during a month, as I did in October, then you buy enough stuff to last four lifetimes.