My house is surrounded by yellow tape and there’s about a dozen cops out there. A half-dozen cop vehicles have shut down the neighborhood.

Things are a bit quieter now. They dragged one of the three perps out of my garage, but not until some extravagant drama took place.

Yes. My house is a crime scene.

Along about 5:30 or 6, shortly after M’hijito came by to pick up his spectacular dog, I’m sitting in front of the computer cruising the Internet, looking for real estate. Nice little house in another neighborhood, only a hundred grand more than mine. Hm. Could I find a hundred grand on short notice? Oh well.

This reverie is interrupted by a cop helicopter buzzing the house. Normally I don’t pay much attention, because the cops buzz our neighborhood all the time. It’s that kinda place. But this particular cop copter is behaving pretty frantically. I get up off my duff, walk into the front of the house, and check the various doors to be sure they’re locked. They’re not. I throw the deadbolts and lock the doorknobs. Wander back to the office, where I try to focus on ogling houses in nicer parts of town.

This, however, is not easy. The cop helicopter is practically parked on top of the roof, and when I glance out the window, what do I see but hordes of cops and cruisers out there. A male shape runs up the sidewalk on the east side of the house, but he’s going so fast I don’t get a good look at him before he disappears past the wall. I figure he’s a cop, though.

Oh well. Sit down to the computer. Shortly hear a “CLUNK” outside the east wall and steps that sound sorta like someone walking on the roof. Are the cops on the roof?

No…it dawns on me that someone has jumped the back wall and landed on the brick-and-board shelves I stuck out there to hold pots and garden junk. Cops? Or fugitive?

Pick up the phone and dial 9-1-1 and close the office door and lock the heavy-duty deadbolt on it. While talking to the dispatcher, who quickly realizes none of Phoenix’s Finest are inside my backyard, I pull the Ruger from its hiding place. 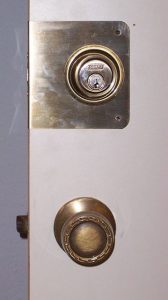 Before long, it becomes apparent that the smartest thing I’ve done to this house is to have installed that solid-core door with the hardened deadbolt on my office, wherein reside the only objects of any value I happen to own. At this point, the office is now a safe room.

The dispatcher gets off the phone. A few minutes later she calls back and says that the police are going to come into my house and get me out of it with a “caisson.” She actually says they are in the house. I ask how they could have gotten in through the security doors without making a fair amount of noise.

Well, no, they’re not in the house, but they’re about to be. Forthwith they show up at the front door. She asks me to walk through the house and let them in, leaving the dog locked in the office.

A “caisson,” it develops, is a formation of bullet-proof riot shields. These guys have got three of them, which they sandwich around me. Pistols drawn, they escort me out of the house behind these things.

They park me across the street in front of Pretty Daughter’s house while the drama proceeds.

Three desperadoes, I’m told, are on the loose. They’ve committed a robbery and taken off in an orange vehicle; just up the street they jumped out of the car and ran off on foot. The cops found one guy’s clothes stashed under the shrubbery in my front yard.

They now extract a German shepherd from a cruiser, kick the locked side gate open, and charge into the backyard.

There, who should they meet but…yes! The perp!

He saunters out of the garage, dressed in a T-shirt and (expensive!) white cover-up I’d left hanging by the washer, with my garden hat on his head and my mud-slogging shoes on his feet. (This means, BTW, that he has gone through a garage cabinet, because that’s where the shoes were stashed, and he’s also come close enough to the kitchen door to try to pull it open, because the hat was hanging on a nail right next to the door.)

He claims to be the gardener, there to trim the trees.

The officers in the yard radio over to their cohort near me to ask if I have a gardener. I ask what their gardener’s name is.

They now pounce this guy and physically drag him, kicking and fighting, out of my backyard.

They bloody up my shirt in the process. At first they were going to give my hat and the mud-sloggers back, but now they decide to keep them as evidence. In addition to unlawful trespass, they’re charging him with burglary and the theft of the hat, shoes, T-shirt, and overshirt!

What can one say? 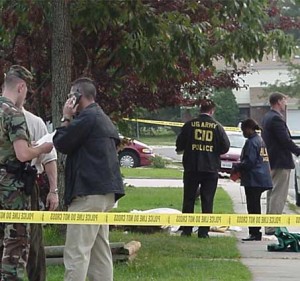 So now they proceed to wrap my house with yellow crime tape. They’ve already shut down the streets in three directions. The drama shifts toward the baroque.

I get into a conversation with a very charming and attractive middle-aged officer. A widower, he has a five-year-old son born late in life (the father’s life, that is): his wife died three years ago, and he’s on the verge of retirement. He’s been with the police force over 20 years. I’m thinking this is a pretty nice guy and he seems to be thinking about the same and things are going along well until he mentions that his mom just turned 70 and I say… “Gee, you could be my son! I’m almost her age.”

The police officers had to kick their way through the garden gate, which was pretty easy because it was flimsy when it was new and now it’s flimsy and old. To my amazement, they actually repaired it on the spot! It’ll need a little touch-up, but thanks to their extra effort, the gate is latched shut.

They figured the perp had stashed a weapon somewhere, possibly on my premises. So they searched the cabinets and the outdoor shed, without coming across anything. If he ran up an alley at any time while they were pursuing him, he probably dropped his gun in a garbage can. But tomorrow when it’s light I’ll open the garage door and check the place more carefully. All I need is that turkey to come back looking for his pistol.

La Maya and La Bethulia got wind of this when the neighborhood association sent out a memo explaining what was happening. After the dust settled, they invited me over for a quick dinner and a gin and tonic. I really wasn’t hungry, having had a large meal with Tina over the lunch hour. However, I certainly wasn’t about to turn down the company.

So now it’s quiet here again. The crime scene tape is gone. The perp is probably out of jail by now. The cute cop has gone on his way. Cassie is crapped out on the floor. My father’s pistol is back in its hidey-hole.

I think that fine door deserves a paint job.

Postscript: Turns out the two reasons the cops were in high Swat Team mode were

27 thoughts on “Live-Blogging from the Crime Scene”