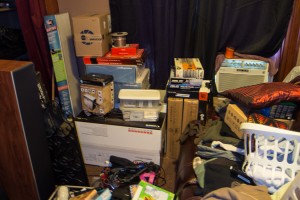 A Funny about Money reader writes to report the difficulties he and his siblings have had in helping their elderly, recently widowed mother move out of a home and settle closer to the family. After sixty years of wedded bliss,  the senior couple’s house was full of — you guessed it: Stuff.

We’ve talked about the way Stuff accumulates like kudzu: all the valuable pieces of junk we guess we must have or that we can’t part with after we no longer need them.

In my experience, the longer you live in a house, the more of this kind of stuff grows inside the closets, fills the garage, and packs the storage sheds. You don’t even notice it all building up…until you have to move it.

But chances are your retirement castle is the last home you expect to inhabit. You don’t have to move for a job and you can’t afford to move to a better house or neighborhood. So you’re likely to be there for a long time, especially if you live to an advanced age.

The problem is, even if you have a place out of sight for all the Stuff that accumulates in the course of daily living, when you die or move, someone is going to have to haul it all out. And that someone is likely to be your hapless kids.

Dear Reader describes filling a 26-foot U-Haul twice and making eight trips in the pick-up and still not emptying the house of its junk collection.

This is not uncommon.

When SDXB bought a house here in the ‘hood, he got it from a couple who were the original owners. The old guy was a stasher. He pretended to be in the junk-selling business as an excuse for acquiring and stashing piles and piles and piles of junk. The garage was stuffed to the rafters with trash — literally full all the way to the ceiling. The backyard was littered with things like old toilets and half-rusted evap coolers.

The inside of the house looked normal enough…until you opened a closet door or peered into the garage.  These houses were build in 1971, so the old boy had plenty of time to accrue valuables.

Their kids lived in a couple of small towns in southern Arizona. They had to drive up here to help the aged parents, who no longer were up to heavy labor. The son who lived in Willcox — on the way to New Mexico! — had to drive his flatbed truck up to Phoenix several weekends in succession. The other kid came up from Sierra Vista, a garden spot depending from an old Army base, also spending many weekends helping to shovel out the house. They made trip after trip after trip to the city dump. Finally, after the third or fourth time the flatbed showed up there in a single day, the lady at the dump’s gatehouse looked at the kid and said, “This is a business, right?”

He had to talk fast to persuade her that no, it wasn’t a business: it was just his father’s hoard.

In the first place, even if you don’t care that your kids will have to break their backs to get rid of your lifetime collection of priceless junk, consider this: keeping Stuff isn’t frugal.

To the contrary, it’s unfrugal. If you’re not using it, then someone else could be using it. Donate it to a thrift store or yard-sale it so someone else can get some use out of it, and a little less junk will be manufactured.

Declutter early and often. Whenever you buy a new shirt or skirt or pair of pants, take one clothing item out of your closet and donate it. Bought a new set of wine glasses or dishes? Take the old set (or what remains of it) over to Goodwill.

And every now and again, look around the house and garage and ask yourself what can go. Stuff has a way of making itself invisible — we get so used to having it around we no longer even see it.

The other day I gave a pricey grown-up’s scooter to the neighbor’s kids. It had been gathering dust on top of a garage cabinet, where it went after I was laid off from ASU. If I want to get around the ‘hood on two wheels, I use a bike.

The kiddies were thrilled to have it! 😀 Very, very adorable. And I was very happy to see it get some use.