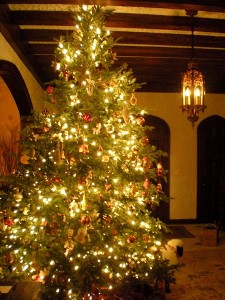 Good Yule Morning to you! I hope your holiday is happy.

Hereabouts, it’s raining. Again. Still. This is the second day of steady rain, with more (we’re told) to come. Just this moment, it’s stopped. And here I am trying to take advantage of that pause to fix something to eat.

It’s not working. Had the bright idea of frying some baby potatoes in butter, rather than, as usual, grilling them. Mistake! The smoking butter set off the fire alarm. Got that damn thing shut off. Carried the potatoes in their pan out to the grill to set the things on the grill pan. It’s starting to mist again. The tiny raindrops sifting out of the sky hit the hot grease and created a stutter of staccato explosions.

Soon it will be raining again, which will make it impossible to cover the grill whenever I’m done “cooking” (or whatever it is) because the metal grill lid will be too  hot.

Haven’t heard when my son wants me to come over for the proposed dinner, a circumstance which I’m beginning to assume means “never.” Okay…whatever.**

What’m’I gonna do about that grill in the rain? Hmmm…  Whenever I can pull the food off of it, I guess, cover it loosely with a few strips of tinfoil. Then as soon as it’s cool enough, put the mostly worn-out cover back over it. No wind is blowing, so a few sheets of tinfoil probably will stay in place for half an hour.

This is devolving into a nice Day from Hell.

Still have the gawdawful cough. The hand still hurts like the devil, though it’s a little better… Friday I’m supposed to go out to the Mayo to get a chest X-ray (since this cough may very well be incident upon the antibiotic they gave me for the UTI, a side effect with potentially fatal ramifications) and a hand X-ray. How exactly any of this is going to help escapes me…there appears to be little to be done in either event. The lung damage, we’re told, will clear on its own in about four months — assuming it doesn’t kill you. The hand? I don’t think it’s broken…and so what exactly is to be done, other than maybe some physical therapy, also remains to be seen.

Yes. The hand…and the woo-woo. Actually, we have woo-woo remedies in connection with both. Videlicet…

This damn cough is about to kill me. Now that we know the stuff that powers Robitussin and its knockoffs — stuff that works very effectively to silence the hack for several hours — jacks up the blood pressure by something upward of 20 points, we’re left with nothing to treat the damn cough.

So I tried an old folk remedy: fresh ginger steeped in hot water and honey.

Interestingly, this does create an improvement. And it works for several hours! The difference is not as joltingly quick as what occurs after a dose of the pizzen in Robitussin, but it’s about the same. And it seems to last for about the same period of time.

Night before last, I came across the jar of CBD cream that came into my possession a few months ago. I’d forgotten about it, until I had to rummage around for some lip balm.

So I rubbed this stuff on the sore spots, fell into the sack, and forgot about it.

Next morning, I wake up and lo! The pain is about 85% improved.

Of course, I think the Goddess has changed Her mind and decided to smile upon me. By the light of dawn, I blithely forget about the crème de cannabis that I’d smeared all over the paw.

As the pain slowly returned over the next 20 hours or so, somehow I managed to remember the doped cream. Could it be possible? I wondered. Looked up the question of whether medicaments of one sort or another actually can soak through your skin and affect your muscles and tendons. Weirdly, there seems to be evidence that this is the case. I mean scientific evidence, not woo-woo.

What the hell? This morning I smeared on some more. It required some time to take effect — if indeed the outcome is an effect. But after a bit, the pain, which has been pretty intense at times, was somewhat relieved.

….and time passes…and the tinfoil trick works, and lo! there’s a streak of blue across the sky, something we haven’t seen in two or three days. The steak & potatoes came out just fine, despite the inclement weather.

Ruby just came in and opened the door to the garage(!). What is that dog trying to say to me?

It’s mighty cold outside. She doesn’t seem to want to go outdoors, exactly. But what interests her in the garage? That escapes me.

But then…most things escape me.