How do brick-and-mortar chain stores even begin to compete with Amazon? Y’know, at first I thought the answer to that was obvious. The reasons, as I saw it, were multipartite:

Hm. How the times have changed. Today, only one of those five seems operative, in my mind: Number 5. Yes, returning stuff to some outfit off in outer space is prohibitively nuisancey. This, however, can be avoided simply by being very sure of what you’re buying.

As for the rest of them?

Today I returned two items to brick-&-mortar stores, thereby putting about $35 back onto the AMEX card. And yes, I was certainly glad that I could walk into those two stores in the same shopping center, retrieving the cash in a 30-minute trip.

But…happy as I was to get the money back promptly and with relatively little hassle, I still came away annoyed as hell. Why? Because both stores — Leslie’s Pools and Safeway — demanded that I give them my phone number before they would give my money back.

The Leslie’s guy knows I never share my phone number with retailers. When I reminded him of this and said I’d forego the refund before I gave him my real phone number, he just entered a random series of numbers, and that was that.

The Safeway clerk, whose chief qualification for employment must have been a minimal number of IQ points, insisted that I had to give her my number. I said I don’t do that. She said, “Well, how did you get the discount, then? You have to give your phone number to get a Safeway card.”

I said “My purse was stolen, and so I no longer have that card.” When you tell a checkout clerk this, she simply swipes her own card over the reader, and voilà! the annoying discount. “When I did have the card, it did not have my phone number. It had my dog’s name on it and it had the local Safeway corporate offices’ phone number on it. That is why I rarely shop in Safeway: customers shouldn’t have to give out private information to get a fair price.”

Clearly irked, she dispensed the refund with no further argument.

And now I will be shopping in Safeway even less than I shop there now, which is hardly ever.

So here’s how Amazon figures into this equation. 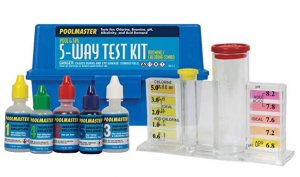 1. The Leslie’s purchase: I’d bought a new pool test kit there, having about run out of reagents and not feeling inclined to buy another test kit from Home Depot. If before I felt HD was a nuisance to shop in, what with the schlep up through the northerly blight and the jerk employees making inane passes at me in the aisles, now I would not give them the time of day, much less my money. I do not want so much as 27 of my cents going into Donald Trump’s campaign fund via Mr. Marcus’s profits. The political filigree clinches it: I will never shop in Home Depot again. This was the reason I bought the test kit at Leslie’s, even though it was far from what I wanted.

But…later, at Amazon I found the same damn test kit with the same generously sized test tubes and the same set of chemicals as HD sells! Five chemicals instead of two, and much easier-to-use and read tubes — for the same price as the Leslie’s puny two-chemical kit with teeny, hard-to-read testing vials.

2. The Safeway purchase: Yesterday in a moment of senility, I bought two tubes of Lanacane, having been sucked in by the package copy crowing about the painkiller it contains. No IQ there…speaking of qualifications for employment with that august corporation. When I got it home, I realized the operative ingredient is lidocaine, not benzocaine, which is what Lanacane used to contain. Lidocaine does exactly nothing for me: might as well rub distilled water on a mosquito bite.

Benzocaine has largely been taken off the market, Big Brother seeking to protect the doltish among us. Why? Because stupid people have actually rubbed it on their teething infants’ gums to shut the crying brats up. It shuts them up, all right: permanently.

Well, if you’re that stupid, one could argue that the gene pool is improved by the removal of your offspring from this earthly plane. But of course Big Brother doesn’t see it that way… 😉 So it is now nigh unto impossible to buy an itch/pain cream that works at a drugstore or grocery store. 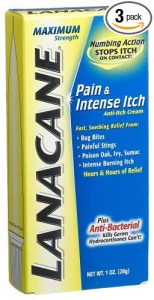 Well, I looked it up this morning and discovered that it is still available in the US without a prescription. Last time I tried to buy it on Amazon, I couldn’t find it. But with this insight in mind, I decided to try again, and lo! There it was: benzocaine cream, 20%, just like the good old classic Lanacane that isn’t being sold to the proles anymore.

I ordered a package of that — you get three containers to a box. Not large ones, but at least containers. When it gets here, I’ll try it out…and if it works, I’ll order up a lifetime supply.

The stuff will be much needed. I’ve developed another of those precancerous lesions on the same hand where the first one appeared. The damn things itch and burn at the same time. Intensely. And for some reason, they start in with that at 3:00 a.m. sharp. So I can’t sleep at night, because these things hurt and itch so much.

I have an old tube of the original Lanacane with benzocaine. It has only a tiny amount left, and I ration it carefully. But I need something to get this discomfort under control. The current keratosis is slated to be singed off on Monday. But recently I learned that when more than one of the things appears in the same area, it means you’re going to get a whole lot of them: it’s a sign of what’s called a “field disease.” This is shaping up to be a permanent hassle: back and forth across the city for biopsies and then back and forth again for removals. Apparently the only way to cut down on recurrences (probably not to eliminate them) is to apply a kind of chemotherapeutic gel to the area. It sounds exceptionally unpleasant, and of course it irritates the hell out of your skin.

So I figure I’m going to need a topical itch/pain-killer that WORKS.

Not a store in the city carries any OTC nostrum that still contains benzocaine. So as you can imagine, I was thrilled to finally find it on Amazon.

And f’sure: Amazon (not Safeway) will get my business in the future.

LOL! Doesn’t that tell you something? You know you’re gettin’ OLD when the shopping coup of the day is not a cute outfit, not a cool purse, not a spectacular doodad for your house, but — argh, yes! — an analgesic skin cream!