OMG! The searchlights are off, the guards are dozing at their watch stations, and the way is cleared to go over the wall! Spent the better part of today plus the two hours of free time yesterday studying The Numbers, trying to see if my plan to escape from teaching could actually work. This is amazing. I’ve gone over this stuff several times and think I’ve got it right. Check this out:

After I wrote that cri de coeur the other day, bemoaning my hatred of teaching freshman composition and announcing a decision to QUIT IT, I realized I’d never done a budget for the little corporate entity. Its needs always seem to be more modest than its means: whenever I’ve wanted to spend money on the business (sometimes quite a bit of money, as in buying a fancy new iMac), the cash has been there. Within a month or two, whatever is spent replenishes itself. So I haven’t felt much impetus to add still more budgeting headaches to an already crabby-making personal finance routine.

Clearly if I’m going to try to live on what The Copyeditor’s Desk is earning rather than just using it as a reservoir to buy electronics and pay the cell, DSL and web-hosting bills, I’ll need some clue as to how much its overhead is. Quaint idea, no?

If I teach two sections of Eng. 235 (Magazine Article Writing) in 2013, I will need to draw a net salary of $6,000 from the corporation. So, already, we see that by the end of the third quarter it has earned enough to cover four quarters of expenses. This assumes the business will perform at the rather sleepy pace we’ve seen in 2012; since I will have a lot more time and energy (and motivation!) to market it more vigorously, 2013 revenues very well may outperform 2012’s.

Now, in this scenario, about $3,840 pours into my personal coffers from the community college, and a small drawdown from retirement savings makes up the difference, providing enough cash to pay the bills when combined with Social Security and a “salary” from The Copyeditor’s Desk. Assuming inflation doesn’t rise unduly next year.

What if I teach NOTHING, yea verily not one course? 🙂

Then I would need to pull more money out of retirement savings. I’m already doing that to cover my share of the mortgage on the house M’hijito and I are copurchasing. In order not to exceed a 4 percent drawdown from savings, the maximum I could withdraw to cover my own living expenses would be $12,785. Actually, though, about $10,785 would be preferable; this would keep the total drawdown (for the mortgage plus my living expenses) safely in the 3 percent range.

Heh heh heh…. That, we might add, is 3 percent of what remains after I’ve raked 20 grand out of savings to buy a new car.

WhoEVER would’ve thunk it?

After much speculating and calculating, here are the numbers for 2013. Except for the teaching income, disbursals will happen quarterly, since revenues do not yet flow into The Copyeditor’s Desk in a steady month-to-month stream. Over three months, though, enough should accumulate to fill the bill. As it were. 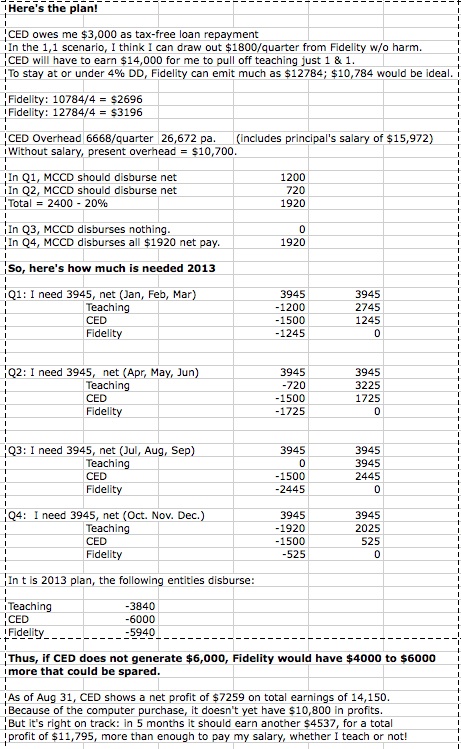 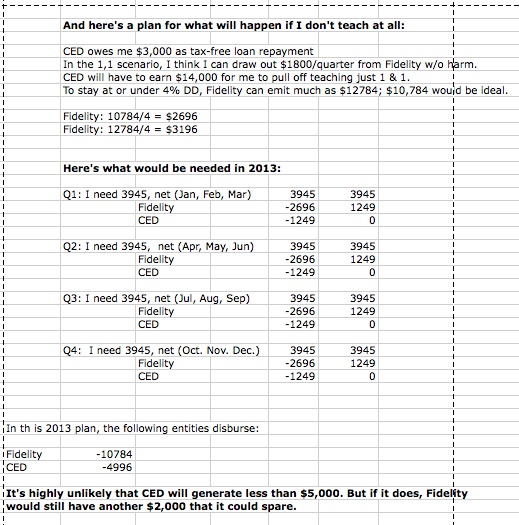 How amazing is that?

I gained insight from this exercise. First, it’s costing more to run the S-corp than I realized. Overhead includes contracting pay for a variety of helpers whose functions run from keeping Funny about Money afloat to editorial, design, and project management. Not counting the one-time expense for the iMac, average monthly expenditures so far have been $965 a month; add it in, and that average jumps to $1227 a month. Yipe!

Second, to keep a grip on large expenditures, I’ll need to self-escrow about $200 a month into an emergency  & out-of-the-ordinary savings account, just as I do for my household finances. This will provide for unusually large expenses, for the cost of the annual report to the corporation commission, for tax preparation, for computer repairs, and for the Costco membership, and still leave something for the various little surprises.

Third, the largest contributor to CE Desk’s revenues is editorial work. Funny about Money runs a distant second; it pays for itself, but just barely. In the near future, I’ll need to revisit this issue and decide whether to continue trying to operate the site as a money-making venture or to demonetize it and treat it as a hobby.

By the time fall semester is over—obviously, I can’t walk now, because I’ve signed a contract (but there are now only 12 and a half weeks left!)—there should be enough cash reserves in the corporate bank accounts to easily carry me through 2013, and, if these figures are right, enough cash flow to support me permanently.