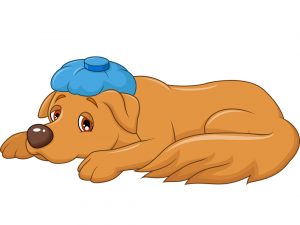 LOL! This little comedy of errors is getting ridiculous. Actually, we could call it a “comedy of fiascos.” One damnfool thing after another.

So after spending the night before last at the Mayo’s ER and getting exactly zero sleep, of course (wouldn’cha know) the next day I had to go down to the church and spend the afternoon minding the front desk and answering the phone, a task I’m not very good at under the best of circumstances. And fully incompetent at under the worst of circumstances. So that must have been amusing to anyone watching. 😀

And yesterday as all the antics were winding down, I kept spiking a fever. It would shoot up to something over 100° — which is very high for me, since my temp is normally well under 98.6°. But I figured it must have to do with the UTI, which had gotten bad enough to produce some interesting pain.

But…well, no. Nothing can ever be that simple in these precincts.

I woke up this morning with a roaring sore throat, a fever, and a cough. So…presumably I’ve contracted the flu, a cold, or strep throat…also presumably picked up while passing hour after hour in a hospital emergency room. This, despite getting a flu shot while I was at the doc’s office a week ago. Yes: it takes two weeks for a flu shot to take effect!!!!!

So…now I’m having to cut choir practice tonight — not that I would be up for two hours of rehearsals even if I weren’t a latter-day Typhoid Mary. And I need to weasel out of staffing the church office’s desk tomorrow. This means, of course, I spent four hours yesterday spreading germs all over the phones, desks, and computer at the office…isn’t that ducky?

Meanwhile, it develops that despite the influenza hazard, it probably was a good thing I traipsed in to the Mayo the other night. One of the nurses there said, after I remarked that I felt embarrassed to occupy their attention with such a petty, stupid little ailment, that urinary tract infections can be “very serious.” Well…she wasn’t kidding. This morning along comes word from KJG that her mom has been in the hospital with a UTI that she chose to neglect — thinking that it would go away on its own.

Wrong. She ended up spending several days in a westside hospital, severely ill, and then being transported to a nursing home, where, KJG says, she “barely has awareness, is very weak, cannot do anything for herself.”

Well, I hope the poor woman recovers. She’s not in the best of shape to begin with — though I don’t think she’s much older than I am. But evidently, if you think you have one of these UTI bugs, you should trot off to the doc the minute the light dawns in your hazy little brain.

Meanwhile, in addition to being genetically susceptible to every damn virus that comes along, I’m allergic to aspirin, acetaminophen, and ibuprofen. So that means the only way I can address a fever is to stand in a cool shower. Which, it develops, is what I’d better go do right now…