Haven’t posted for a day or two. Busy couple of days and then last night the damn router went down again and this time stayed down all night. GOTTA get a new router. One of these days…

Meanwhile, a number of developments, all of them positive for a change!

The Mayo surgeon had to loosen her clutches long enough for me to get a grip on my wits, at least in a perfunctory way. As you’ll recall, on the weekend before the last planned surgery, scheduled for a Monday, a convenient case of bronchitis led the anaesthesiologist to intone,”It would be foolish to proceed,” frustrating the surgeon no end. The next fun procedure was scheduled for the 15th of this month.

Subsequently, the surgeon erred in forgetting to have the Mayo’s scheduling department reserve an OR for that date. So the soonest she can try again will not be until after she gets back from vacation, toward the end of this month. That gives me time to get to another doctor at another institution to try to get some fresh insight, and to gather enough strength to put up a fight. Somehow I’ve got to bring a stop to the present cascade of disasters; whether I can remains to be seen, but at least I’m beginning to make out a vague pathway toward that goal.

1) I’m not in the market for a man, and at my age no one looks at my boobs and so no one is going to notice whether I’m a little lopsided or not. For that matter, at my age no one sees a woman at all. When strangers are staring in your direction, they’re actually looking right through you. What they see is the background behind you.

2) More to the point, especially for older women, breast reconstruction is more complications and more surgery waiting to happen. The autologous procedures now in vogue, where they gouge chunks of flesh out of your back, belly, butt, or thigh and slap them on your chest, are esthetically unsatisfactory IMHO, cause still more surgical wounds for you to have to recover from, weaken the muscles in those areas, and can leave you with chronic back pain, weakness, hernia, and the unpleasant. disabling manifestations of upper quadrant disorder. As for implants: silicone or saline, they have an expected lifetime of about ten years, at which time you get to enjoy still more surgery to have the damn thing removed or replaced.

When I told WonderSurgeon that I do not want reconstruction, she told me I need to “think about it.” In other words, I’m a child who doesn’t have good sense.

Guess which one is fake.

One of my friends chose to go flat after a double mastectomy; she said she never regretted it, and she looked just fine. Obviously, if one side is flat and the other is not, that’s a little more problematic. However, you can get custom-made prosthetics that are a great deal more convincing and comfortable than fake reconstructed boobs (if you’re feeling strong, go to The Scar Project, where you can see artist-quality images that show women with and without reconstruction — warning: this is graphic).

Such a large  contingent of women has decided to go breast-free that there’s even an organization representing them. Interestingly, many of these women describe similar pressure from their medical teams. Apparently people are so convinced that every woman’s self-image is so inextricably invested in her boobs that a woman must be crazy if she chooses not to go through the tortures of the damned for the sake of having a lump sticking out of her chest.

So: I need some reinforcements to put up a fight on this front.

I called to make an appointment with a medical oncologist at St. Joe’s that my gynecologist, who unwittingly plunged me into this mess, has been trying to get me to see. He also has been out of town, and so on the last attempt to get together with him, his staff couldn’t shoehorn me in before the the 15th. Called again, they managed to set up a meeting for the 20th. Hallelujah!  That means I’ll be able to talk with the guy before the Mayo doc can cut me up again and before the craziness makes another spin around the drain.  I don’t know whether he’ll provide enough moral support for me to hold my own, but everyone who knows the man says he’s eminently rational.

So that may be a dim light visible through the black fog.

Yesterday morning the damnedest thing happened. My single all-time deepest-pocketed client, Scott Flansburg — the man who made it possible for me to pay off the mortgage in one fell swoop — has hired a new business manager. He’s looking to kick his business plan up a notch, and he wants someone, namely me, to write new products for him and the like. Said bidness manager tracked me down, how I do not know — probably through LinkedIn — and asked if I would be interested in working with them. They want to expand into e-publications.

Lo! What should The Copyeditor’s Desk be into but e-pubs! I’ve got a slew of formatters, illustrators, and designers who can hire on to help him out, and of course I wrote the book that earned Scott $1.5 million in the first year after publication and $1 million the following year.

Heh. When we say “things are looking up,” we speak in cosmic terms.

Meanwhile, I have two clients who are just wrapping up their books. Both of these guys  have uttered the words “…and how do I market this thing?” Flansburg is a wily sort of a gent, and you can be pretty sure that he would not hire a marketing agent, which is what this guy is, unless the guy had a decent track record. So this is promising: we just may be able to do some bidness here!

If the guy can sell books (and authors), The Copyeditor’s Desk may soon have two happy customers. And that is always good. Very, very good.

And finally, in the God seems to have gotten over Her tiff at me department: I took it into my head to buy a large Talavera-style garden pot for my beloved shady deck. Purchased anywhere north of central Mexico, these things are absurdly expensive, and the place where I chose to buy, Whitfill’s Nursery, is famed for charging through the wazoo for everything. So I walk in there and find the desired vessel, and on my way out my eyeballs land on another design. The actual price of these monsters is $59.99, but someone has scribbled $29.99 on the one I happen to spot.

On close inspection, nothing seems to be wrong with it. Apparently some underling carelessly mispriced it. The kid at the cash register didn’t even blink…so I walked outta there with a BIG, beautiful, gaudy planter for half price! 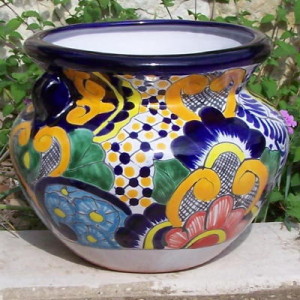