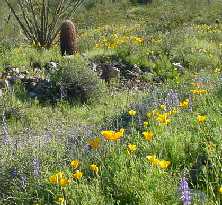 Yesterday, for the first time in many a moon, I took a much-needed hike up North Mountain, not far from my house. Besides having reached a peak state of out-of-shapeness, I’m getting fat, and the stress from the crescendoing din about the job situation is giving me a chronic bellyache.

As I was walking up the mountain (and starting to feel better), it occurred to me that I may be better off living on lots less income and living with lots less stress.

And the stress level, of late, has been measurable in astronomical units. In August we were told to expect an announcement around September 15 to the effect that almost everyone in my job classification would be laid off. Then the story was that the university’s president could not make such a decision without approval from the Board of Regents, which meets in the first week of December—hence last winter’s round of Christmastime layoffs. That date came and went. But now, in January, our rabid legislators, unleashed as our governor leaves to join President Obama’s cabinet, have decided to gut all three universities by way of taking out their loathing for Communists and Darwinists (which is what they think resides in a College of “Liberal” Arts and “Sciences”: not a joke!). Everyone’s salary is cut by 12%, and that’s just for starters. The president himself—no mere rumor-monger—has announced that 1,000 people will be laid off before the end of the fiscal year. Nontenure-track lecturers have already been told they will not be renewed after this semester; much more bloodletting is to come.

No wonder I feel like I’m going to throw up every time I eat! It’s not cancer: it’s GDU.

Reflecting on my career, such as it is, it struck me that if you count the years I was in graduate school, when I taught two sections a semester as a “teaching assistant” (read “slave laborer”), I have been working for the Great Desert University for about 25 years. There was an SAHM interlude where I freelanced, wrote three books, and worked on the editorial staffs of two large magazines. But otherwise, almost all of my work life has been spent at That Place.

And lemme tell you, working in any department of That Place is by definition stressful. When I was in graduate school, a “teaching assistantship” meant you were handed a set of books and two sections of 25 freshman composition students and told to build a course—unsupervised. There was a one-semester T.A. seminar, which carried no credit and which was a grand waste of time. By the time you prorated the salary over the number of hours this job entailed, pay was significantly less than minimum wage. But you got a tuition waiver. Since the Arizona constitution mandates that public education will be provided for citizens at a cost as close to free as possible, at the time a tuition waiver did not amount to much.

Teaching freshmen…OMG. In the first place, freshmen are not quite a step removed from high-school kids. If I had wanted to teach adolescents, I would have gotten a teaching certificate, not a Ph.D. in English. Freshmen face all the difficult developmental issues that high-school kids deal with—sex, friends, lovers, parents (complicated by the kids’ first solo flight into the world), teachers, drugs, alcohol, cars, race, class, gender, and all that—to which are added the vicissitudes of life as we grow older: deaths of friends or family members, abuse by love partners, money, failure, frustration. Poor little things. Well, freshmen tend to confuse the English teacher with Mommy, often because inexperienced composition instructors tend to give assignments that invite students to write about personal matters and hence, in the students’ not-quite-adult minds, to invite the instructor into their lives. Some of their issues are heart-rending.

Add to that the general illiteracy of the standard American high-school graduate, and you have one helluva job in teaching composition. Any day I’d rather clean house for a living!

Editing a research newsletter for the graduate college, which I did for a couple of years, was infinitely easier and pretty fun, except for our photographer, who was an evangelical Christian fundamentalist. He used to try to proselytize everyone we went out to photograph, often to embarrassing effect. While a friend and I were poking fun at his aggressive ridiculousness, we got word that the man’s only son, a winning young teacher with a doctorate in physical education who was roundly loved by everyone who knew him, was waiting at the stoplight at 44th Street and Osborn when a cement truck came along, rolled over on top of his car, and smushed him like a bug. Needless to say, our photog went even further off the deep end (he became convinced that God had arranged the extinction of his son to spare the son great suffering that had been scheduled for later in life), creating a situation that was not only sad but quite difficult to deal with.

Teaching upper-division students was a huge improvement over freshman comp, even though the course I taught most often was known off the record as “freshman composition for juniors and seniors.” When I returned to GDU after a 15-year hiatus, it was to a satellite campus populated mostly by returning adults, a very choice sort of student indeed. This would have been idyllic were it not for the course load and the chronic overenrollment of the writing sections: four and four, capped at 30. I taught four sections of writing courses—120 writing students at a time!—every semester, and usually picked up two more sections during the summer. To give you a picture, if 120 students each turn in a three-page paper, you are faced with THREE HUNDRED AND SIXTY PAGES of gawdawful drivel to plow through. Not only do you have to read it, you have to try to comment intelligently on it; quite a trick, given the quality of the material produced by people who think Wisconsin is a Rocky Mountain State and World War I happened during the 19th century. Consider that you should assign at least six such papers, and you get the idea.

Soon I learned never to accept overrides, no matter how pathetically supplicants begged to be let into my overstuffed courses (National Council of Teachers of English guidelines specify no more than 20 students in a writing class). But occasionally the admins or the dean would quietly admit people behind my back. One semester I showed up and found FORTY-TWO students enrolled in a technical writing course! And in addition to that section, I had three others filled to their cap of 30 students. That’s 132 writing students. Again, by the time you prorated my salary over the 14-hour-a-day seven-day weeks, it came to right about minimum wage.

Now that I’m on the main campus editing copy for scholarly journals and supervising a small pack of graduate students, life is much better. Except for the swirl of layoff rumors. However, though things are relatively quiet now, this job has not been without its stressful moments.

Certainly, coping with GDU’s answer to Bartleby the Scrivener was one of the major causes leading up to the stress attack that put me in the emergency room and kept me lashed upfor a good twelve hoursto every cardiovascular monitor known to humanity. The Bartleby situation went on for four. long. years. By the time she quit, shortly after the 2007 Christmas break, I was becoming obsessive about the woman. Recognizing that she was quite literally driving me nuts, I had made up my mind that if I couldn’t force her out at the time of the spring 2008 annual review, I was going to quit myself.

Because the Red Queen said so. Off with their heads! Off with all our heads.

If I’m canned, I will not weep long. It will be a relief to get back to the real world, where the mountains to climb are made of granite and tackling them is good for your health.