Tuesday: The usual 4 AM a.m. wake up call leaves me, once again, without enough sleep by the time I finally give up and roll out of the sack. About three hours later, I decide I’d better walk the poor little dog, who has not been outside in for-freaking-ever.

So I’m lashing the dog up in the complicated lash-up required to keep her more or less in line wiithout having her choke on her collar and fly into a reverse-sneezing frenzy. Remember, a doggie walk in these stressful days has to be managed with one hand: normally it requires two hands to keep her under control at all times. So in the best of conditions, this stroll is going to be a one-handed wrestling match.

Phone rings, just as we’re about to head out. My friend who was going to drive me to the first physical therapy session in the morning. Yeah.

Well, says she, she has remembered that she has a couple of errands in Scottsdale. So she will need to drop me off about a half an hour early and I’ll have sit there and wait for the therapy appointment and then  after that little nightmare is over I will have to wait again for heaven only knows how long until she gets back from Scottsdale to pick me up.

To put it mildly, this is not a scenario that appeals. So I say I will find some other way to get there.

As a matter fact the “other way” will be for me to drive myself, over my son’s dead body and in direct contravention of doctor’s orders.

Frankly I believe I will have no problem driving over there one-handed. As a practical matter I drive around with one hand most of the time. Except of course when dodging my fellow homicidal drivers. This, after all, is why we have power steering. Right?

By 9:45, the rush hour will be over and it should not be too unsafe to get there. It’s only 3 miles. I can get down there and also back home with a series of right-hand turns… In fact the only left turn I would have to make would be off a neighborhood arterial onto a relatively tame main drag. Additionally, the parking at this place consists of a long row of single-car spaces, so you can drive straight through without having to back and fill to get out.

Ruby loves grass, probably because we don’t have any. So when we get into the Richistans, all she wants to do is wallow and roll in the luxuriant, irrigated lawns that grace the stately homes. And, we might add, sniff every drop of dog pee that has ever  been deposited thereon. And of course, dump on said grass. Preferably directly in the line of sight of the proprietors’ front windows.

It’s supposed to reach 90° by afternoon and it’s already getting warm. All I want to do is move along, get the doggie walk out of the way and get back home where I can sit down and put my feet up again. So while she’s sniffing around in someone’s grass, I decide to stride right along… As I’m marching toward Pretoria, dragging her highness behind me, I hear ssskkkkkkkriiichchchchch….

Huh? Turn around, glance back, and there’s the poor little dog at the end of the lead: she has assumed the position and is now helplessly being dragged forward by the harness, squatting and looking much like a stuffed Easter bunny.

Oh, dear God! I stop. She finishes the job: all over the neighbor’s front sidewalk. So there’s a nice mess to clean up!

We continue up the way and of course, invariably, it does not matter what time of day or night you leave your house with your dog…you cannot avoid your fellowvdog-walkers…

So we have to cross the (hot!) (asphalt!) road and proceed down the sunny side of the street until we get past that patrol. They drag their human into a garage, but the human leaves the garage door open, thereby also leaving open the question of whether he has let his dogs off the leash to roam around loose inside there, ready to charge us as we walk past.

I’ve noticed, on the way out, that the Funny Farm’s front yard is sprouting a nice crop of dandelions and assorted other weeds. When I get home, I call Gerardo to find out when he figures he will be around again. He says he’ll come over tomorrow. How convenient. I tell him that I won’t be here tomorrow morning, but Luz will be here. I arrange to leave a check for him on the back patio table. It also means I will have to leave the side gate open, because he has lost the key that I gave him and I have never managed to go to a locksmith and have another one made. Nor am I going to do so tomorrow, given the circumstances. I pointed out to him that Luz will need to be alerted to his presence since she will be less than thrilled to see a crew of dudes invade the backyard while she’s here alone.

At any rate speaking of the dog and the doggie products, I did manage to pick up three weeks’ worth of doggie mounds out of the backyard this morning. This is the first time that I have felt up for even trying to maneuver the doggy picker-upper gadget… And SURPRISE! Nooooo problem! So that was a pleasant discovery.

As a matter of fact, overall the arm is feeling a lot better. It seems not to hurt (much) unless I lift it up and out to the side. Lifting the arm straight frontward seems to elicit scarcely a twinge… Though I will say I haven’t tried to raise it over my head. So I take this as a good sign. I hope.

One thing that is clear from this fiasco: you cannot live in Phoenix without access to a car…PERIOD. It very well may be that if you imagine you are going to age in place in a freestanding home, you’re simply going to have to be able to drive a car or to find some way to get some transport service — not volunteers, not relatives — to ferry you around. This predicament, of course, is what makes it possible for outfits like the Beatitudes to talk the elderly into consigning themselves to a de facto prison. The Beatitudes will ferry you to doctors and grocery stores — at some considerable inconvenience to yourself, but at least you can get there.

One way around that, I think, is to move into one of the newer apartment developments that are going up around the city. These things are roughly modeled on European urban areas: commercial and office space on the ground floors, with apartments on half-a-dozen upper floors. If you live in one of these places, you could in theory avail yourself of restaurant food and maybe even some (very expensive) specialty groceries. One of my friends works in such a place right now…apartment buildings and office buildings are mixed together with retail and restaurants in a single development. It wouldn’t be my first choice of living environments, but on the other hand it wouldn’t be my last choice, either. The Beatitudes would be my last choice. With Sun City as the second-to-last. 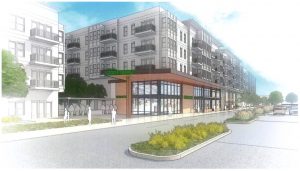 The big malls built in the 50s and 60s here are moribund. Plans are on the drawing board to convert one such mall — the venerable Paradise Valley Mall, home of Macy’s (defunct), Dillard’s (now renting out its second-floor offices to freelance entrepreneurs), Penney’s (on its way out), and the like. There is a freestanding Costco in that shopping center — one would presume they will close it because it will be way too tacky to go with the fancy production the developers intend to build… But if it doesn’t close… If it stays in place… Well! That would make such an apartment development look mighty attractive. The living space would be right next door to a place where you could buy anything your heart wants, in lifetime supplies. Costco also has a gas station that underprices the competition by anything from $.05 to $.13 a gallon. It would be across the street from a Target, an REI, a Dollar Store, and a slew of middle-class restaurants. And it’s just up the road from the Valley’s largest and best-stocked Fry’s supermarket, which competes directly and ferociously with AJ’s, purveyor of fine and overpriced goods And it’s also close enough to the Mayo Clinic that you could get there quickly, and the 911 people would drive you there if you asked, rather than telling you that they’re going to take you to the depressing facility at John C Lincoln. The truth is that might be a place for me to consider moving to.

Fact, I think I will ask one of my coreligionists, who is an ambitious real estate agent, if she’ll keep an eye out for me as that place is developed.
Later. Having been up since 4 a.m., I’m going to take a nap before the sun comes up. And honi soit qui mal y pense!

1 thought on “Out of the tunnel of annoyance, into the daylight of hilarity…”