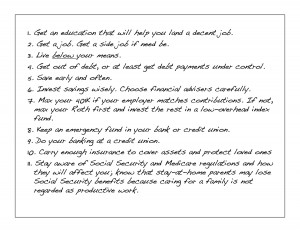 Easier said than done if you’ve got a mortgage, a car payment, and a lingering student loan. Here we are at Item #4 of all the PF advice you need to know crammed on a notecard.

Two things worth knowing about debt:

• It can be the biggest rip-off that ever came down the pike.

• There’s a trick to getting out from  under it.

Debt — for bank loans, payday loans, car title loans, credit card loans, and whatnot — is a rip because it tricks you into spending more money than you have (or may ever have) and because it causes you to spend far more for an item than it’s worth. By the time you’ve paid on a home mortgage for 30 years, for example, you’ve paid at least twice the purchase price of your house. Yeah, you’ve gotten a little tax write-off, and yeah, 30 years from now your dollars will be worth so little that the house will appear to be “worth” twice as much as you paid for it. But because you’ve paid that much, when you sell the house you won’t make any real profit on it: you’ll be lucky if you break even.

Auto loans are even worse, because a car loses value with every minute that ticks by. Your car is objectively worth far less than you paid for it, and far, far less if you paid interest on a loan over any length of time.

Here’s the thing about interest: in the early years of a loan, almost all the payment goes toward interest. Thus you’re not really paying much of the principal — the amount you actually borrowed — until the loan has aged like a wheel of Camembert. As time passes, you pay down the principal in tiny increments…after some months or years (depending on the size of the loan), you’ve paid enough principal that fewer dollars per payment get eaten up in interest. That is, the more principal you’ve paid (the less remaining to be paid), the less the amount of each payment represents interest.

So: you can speed the pay-down of a loan by prepaying principal. This means that you make your regular payment on, say, the car. And in addition, you also pay a few dollars a month — it needn’t be as much as you fear — toward the principal. As you pay down the principal, the amount the lender can charge you for interest drops accordingly and the amount of your regular payment going toward principal rises. So, prepaying principal can significantly decrease the amount of time you have to pay on a large loan.

If you can afford to make one extra house payment a year — 13 payments instead of 12 — do it. That also reduces principal over time. Better, though, to pay as much extra as you can each month toward principal. The faster and the earlier you pay down principal, the more of your future payments will go toward principal and the less toward interest.

Lenders are wise to this scheme, of course, and some will try to trap you into a contract that doesn’t allow you to pay principal in advance. Pay attention to the terms of any loan contract, including credit-card agreements. If you can’t figure it out, ask if you’re allowed to prepay principal. If the answer is “no,” don’t sign on that dotted line! Find another mortgage lender. Buy your car somewhere else.

Don’t do it if you can avoid it.

But if you are already in credit-card debt, you need to escape. The same theory applies here: pay off principal as fast as you can.

In theory, it makes sense to pay down the ones with the higher interest rates first. However, if a large balance  at a lower rate makes you feel like Atlas balancing the weight of the world on your shoulders, then by all means get rid of that one first.

• First, stop charging things. If you can’t afford to pay for something out of pocket, don’t buy it! That includes meals in restaurants, which will run up your charge card faster than a mouse racing around in one of those little wheels. Eat in. Buy clothes frugally. Don’t buy anything you don’t really need. And use the savings to pay down principal on the chosen credit card. This means that you send in more money than the minimum payment: If you have $1,000 charged up and the minimum payment is $50, send in $150. Over time, the extra amount will pay down the total amount due…but only if you’re not adding to the debt as you go.

• Next, budget a specific amount per month to pay toward the selected underwater credit card. Eventually, that will pay off the card.

• And third, throw every windfall you get at the debt. Every tax refund, every kickback on the Costco credit card, every cash birthday gift from Mom and Dad should go right straight to paying down principal.

• If necessary, get a side job to generate extra cash for the purpose of paying off debt.

Sooner or later, you’ll pay off your targeted credit card. Hallelujah! Have a party — you could even go out to dinner…once…as a celebration.

Then take your budgeted amount and start applying it to the next card.

Keep this up long enough, and sooner or later you’ll have all the cards paid off.

By that time, you’ll be used to living below your means. This is a good habit to have developed — don’t change it.

Instead, use the money that you were throwing at the credit cards to pay down the car loan. Once you have that paid off, start applying the same amount toward mortgage principal.

It makes the best sense to pay off debt in this order:

• First, credit-card debt. Why? Because credit-card interest is exorbitant and truly destructive.

• Next, car loans. The less you pay toward a commodity whose value is decreasing steadily, the better. This also is destructive debt, but not to the same extent as credit-card debt.

• Then, the home mortgage. Because (in theory) your house is appreciating in value and because you get a small tax break on your mortgage interest, mortgage debt is not as destructive as automobile and credit-card debt. But it’s still something that sucks away cash flow that could be supporting you more comfortably or going into retirement savings.

• Finally, student loan debt. Interest rates are fairly low on these instruments, making them less evil than other forms of debt — although a student loan, too, sucks money out of your pocket.  If you’re one of the lucky people whose college education helped you to get a decently paying job, then a student loan in fact represents a kind of “positive” debt. That doesn’t mean you shouldn’t get rid of it; only that it’s not as pernicious as the first two or as burdensome as the third.

It’s surprising how fast prepaying principal brings down loan debt. I was able to pay off my first After-Divorce car, a very nice Camry, by taking every windfall straight to the credit union and telling them to put it toward principal and by paying a set amount extra each month toward principal.

You can do that, too.