Running low on the fancy bread I favor, available as far as I can tell only from AJs, I decide I prefer not to risk my life to buy a new loaf. Surely I can make it.

Well, of course I can: back in the day when I used to bake bread all the time, I frequently made similar loaves. Problem is…back in the day, my oven worked. Now it functions as another kitchen cabinet. I haven’t baked in years — cook most stuff on the grill, and what won’t work that way, atop the stove.

I think bread will probably bake on the grill. But since a loaf typically takes forty minutes to an hour to get nice and brown and crisp and cooked all the way through, that would entail an enormous drawdown of propane.

Williams-Sonoma claims the pricey little countertop oven I bought to take over after the Kenmore wall oven broke will bake bread. Doesn’t look like it could possibly be large enough to accommodate a big peasant loaf. But…the one from AJ’s fits in there. Just. 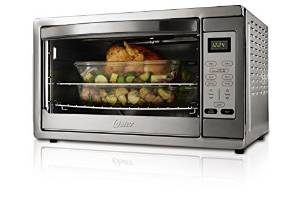 Okay, it’s nothing ventured time. Mixed up a batch of dough in the bread machine — those things are great for kneading dough, but not so great for cooking it: the result tastes just like grocery-store schlock. But if you take out the risen dough, shape it into a loaf or two, and bake it in the oven, you get just-like-homemade bread.

Luckily I’d stashed a bag of flour and a bottle of yeast in the freezer, so the ingredients to make this food of the Gods were on hand.

Let the blob of dough rise on the baking sheet that came with the little oven. (It’s been soooo long since I’ve made bread that I actually forgot you can…uhm…y’know…divide it in two and make two smaller loaves…) This produced a chunk of dough that would rise to the dimensions and shape of the beloved AJ’s loaf.

You realize…I haven’t used the wall oven in this house since 2012. Almost eight years, that’s how long it’s been! And I hafta say: I haven’t missed it. Everything I’ve needed to cook has been doable on the grill or the stovetop.

Occasionally, I’ve thought I should buy one of those small Weber or KitchenAid grills, which would just about fit a loaf or two of rising bread. The idea would be to use it only for baking bread or casseroles…the theory behind the idea being that trying to cook bread in a grill covered with grease from steak and fish and the like would produce a mighty strange-tasting loaf. In fact, I was just about to shell out for one of the things when the covid epidemic struck, but by the time I’d reached the “maybe probably no doubt i should do this” stage, it was too late. Trapped in the house now, I have no way of getting up to Lowe’s or the Depot, selecting the mini-grill of my dreams, and putting some handyman up to assembling it.

And lo! The little oven’s alarm just went off!

And darned it it doesn’t look like our experiment worked! We have a big peasant-style loaf of bread with a nice crispy crust. Sounds hollow when you tap it, so it’s presumably cooked through. 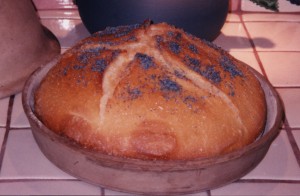 Mwa ha ha! Outta my way, AJ’s! It looks like this is going to be the answer. And you know…five cups of flour, a tablespoon of yeast, and 40 minutes’ worth of electricity cost one helluva lot less than buying this thing at the city’s most upscale gourmet grocery store.

How to make Bread in the Time of Covid:

Pour two cups of water into the bread machine’s bucket. Add the yeast and the salt. Then add the five cups of flour. Set the bread machine for “dough” (this setting may also be called “knead”). Turn it on and go away.

The bread machine will mix the dough, knead it, and keep it warm while it rises. When the timer beeps, come on back in the kitchen and retrieve the dough from the machine

Preheat the cooker you intend to use.

Meanwhile, take the baking sheet you wish to use and sprinkle it with a thin layer of cornmeal (this prevents sticking). Place the blob of dough, shaped into a round or oval loaf, on the baking sheet (you can use a big skillet if you intend to cook in a grill or regular oven),  and let it rise for 50 minutes to an hour. Then, with a sharp knife, slice a cross or a couple of parallel slashes in the top and set it into the preheated oven or grill.

If you’re using a BBQ , you might be well advised to set your baking sheet or skillet on top of a couple of bricks placed on the wire grill. Try to avoid positioning the loaf directly over the propane burner(s).

If you’re using a countertop oven, position the rack as low as it will go in the oven’s cabinet.

Set your oven or countertop oven to 350 degrees. Use an oven thermometer to help regulate your BBQ grill to around 349-400 degrees. Allow the bread to cook for about 40 minutes to an hour. When it is brown and crispy on the outside and sounds kind of hollow when tapped, it’s done.

4 thoughts on “Progress in the Time of Cholera”