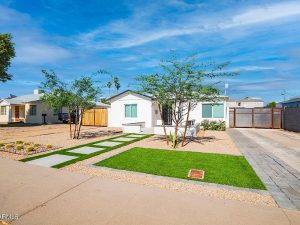 Speaking of the loony tunes entailed in living in Phoenix, lookit THIS.

$585,000 for THAT? A tiny little out-of-date bungalow, built in 1941, no pool, fake grass(!!) or else plain dirt, in one of the noisiest parts of the city: 1700 square feet including the guest house(!!). For less than that (by far), you could buy a palatial apartment in my friends’ high-rise right on Central Avenue, with a view of the entire East Valley from Camelback to the South Mountains.

Real estate prices have gone bonkers here. Here’s a bargain: 395 grand to live in 1500 square feet in the middle of Drug Dealer Central. Hoooly mackerel! I wouldn’t get out of my car in that area.

Here in the’Hood, they’re asking $519,000 for an 1839 s.f. house cattycorner up the street from the Funny Farm. That’s just insane. The upshot of it is going to be that property taxes soon will go so high here I won’t be able to afford to stay in this house much longer.

They’ve done a lot of fix-up on that house, clearly with an eye to selling it. Interestingly, I haven’t seen a lot of workmen over there — ever. So he must be pretty handy: presumably they redid the 1970s kitchen themselves, turning it into the latest in stainless and granite.

I’m thinking I should replace the Mexican tile countertops in the kitchen here. Put in slabs of granite. Mexican tile is wildly out of date now, plus it has a crack in one place.

Pool Dude showed up about 7:30. Along about then a cop copter starts circling frantically over Upper Richistan. This continues all the time he’s working.

Out of curiosity, we call up the neighborhood Facebook page:

Does anyone know why the police have 11th Ave between Wunderland and Larry’s Lane blocked off? I hope all is well with our neighbors..

Alyssa L: Oh no! I hope everyone is ok too

Donnie DS: There are looking for a man that ran into that block. There were 2 men suspected of assault. They have one in custody already.

Reply: Donnie DS thank you. My husband just spoke with the officers and confirmed the same. The officer said they are looking for someone. While there the police were searching the backpack of the one suspect and found a gun. Police said to remain vigilant. They have brought in a K-9 unit so hopefully they find him quickly.

Bj U: seems like they’ve got him surrounded in the Donleys’ yard, i can hear them yelling orders

Reply: Bj U I hope so. The officer just told me they may need to be coming into my yard and to have everyone inside doors locked

Reply: Bj U he just told me they’re finishing up.

AC W: My husband was the one involved in the assault. Here’s a picture he took beforehand. He’s still with the police, but this is what he texted me.

“He asked me what I was looking at them and I said I wanted to see where they were going. So he stopped in front of me and told me he’d stay right where he wanted. Then he pulled the handle of the gun up from his waistband. I hit him w my coffee cup and knocked him down. Then his buddy jumped me, and I fought him off as best I could. They took off eastbound on Larry’s Lane and I chased them as far as the firefighter’s house. Then I banged on his door and asked him to call 911.”

Reply: Wendy R WOW! hope they find them. how scary!! Is your husband ok?

Reply:  AC W He is fine. Just a little scratched up. Apparently the other guys are a bit more beat up. They have one suspect and the gun. The other guy is completely surrounded.

AC W such a scary situation! Glad they have the guys!

Reply: AC W glad your husband is ok. Thankful he is out there looking-after our neighborhood, just hoping something like this doesn’t happen again!

Reply Sid C: AC W glad he’s fine . Thank him from the neighborhood for us. RP sticking together.

Holy sh!t. Ruby and I were over there about an hour earlier: Upper Richistan is our favorite doggy-walk venue.

See why one of my mottos is “Over my dead body”?

Pool Dude was here throughout the episode.

{sigh} I prob’ly should have gone back to the Hidey-Hole and retrieved my father’s .38. But with PD here, I figured things were probably as OK as they were gonna get. Besides which, you know and I know that Pool Dude undoubtedly does not wander around people’s backyards without resources. And I’m dead sure he can shoot straighter than I can.

Think of that. People are willing to pay upwards of 500 grand (upwards of a million, over in Upper Richistan) to live in…THIS place????

2 thoughts on “Real Estate Through the Roof: Right up with the cop helicopters”