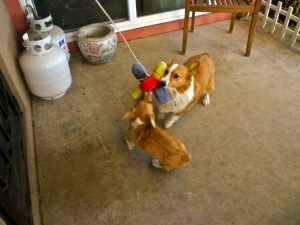 Dammit!  I thought he was gone! But ohhh no! This morning when the dogs and I took our usual route around the ’hood, there he was, in front of the cat brothers’ house, dumping cat food on the sidewalk.

We have this old guy who makes a hobby of driving around Richistan during the early morning hours and feeding the outdoor cats. He’ll dump a pile of cat food in the middle of the sidewalk and then stand around waiting for the neighbors’ stray cats to come over and let him pet them.

He also carries pocketsful of large-dog Milk Bones, which he likes to dispense to passing doggy-walkers.

On the surface, this is cute and sweetly eccentric. But when you give it even just a little thought: not so much.

Today’s encounter marked the second time he handed my dogs chunks of Milk Bones after I’ve asked him not to, and the second time it’s caused Ruby to choke and fly into a ten-minute fit of frantic gasping for air. She tries to swallow the whole damn thing without chewing it up, and of course she chokes on it.

Apparently he can’t or won’t remember not to fucking do that. It was the second time I’ve had to pick her up and run with a 25-pound animal in my arms and another one in tow on a leash, hoping I could get to the emergency vet before she died.

Exactly how I imagine I’m gonna get to the emergency vet through rush-hour traffic escapes me, but I’m willing to try. 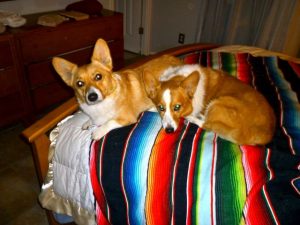 Fortunately, she managed to gag the stuff up out of her throat by the time I reached Feeder Street NW, and once again she turned out to be OK.

But one of these times, she’s not gonna be OK.

And realistically, there’s no way I can get her to veterinary help at 6:30 or 7 in the morning.

What is the matter with people? Wouldn’t you think the sight of an elderly woman RUNNING down the street with a choking dog would be at least somewhat memorable?

I haven’t seen the old buzzard for a long time. So I imagined maybe he had fallen ill or died — he’s very elderly and seems somewhat frail. Lulled into a false sense of confidence, I’d taken to walking on that street again.

The real issue is that I haven’t felt very well myself for the past several months and so just haven’t been walking the dogs at all; or when I have, it’s been later in the day. Now that three-digit temps are here to stay, we need to be out of the house by 6 or 6:30, or else we ain’t a-goin’.

So I guess we’ve just been missing him: he’s been there; we haven’t.

Obviously, it’s my responsibility to tell some nutty animal-lover not to feed random stuff to my dogs. But…

In the first place, it feels rude to yelp at some poor old lonely guy, “Hey! Don’t do that!” Which is about what you’d have to do to stop him. He charges at you with both hands full of dog “treats” and shoves them into the animals’ mouths before you can say no. And in the second place, I have asked him not to feed those things to my dogs. He either doesn’t remember or just ignores me.

When you say to him “I’d rather you not feed those to the dogs” or “Please don’t give that to the dogs,” his response is “Oh, pooh pooh! It’s just a little Milk Bone.” He thinks they’re harmless.

And they probably are. Tales that Milk Bone is full of toxic carcinogenic chemicals, it develops, are folkloric: they’re just not true. On the other hand, they’re not full of anything that’s very good for your dog, either. Sort of like candy bars for humans: empty calories. They do contain some kind of beef product, though…and Ruby is allergic to beef in all its manifestations, even cow’s ears and leather chew sticks.

Ruby and Cassie get plenty of dog treats: pieces of carrot, pieces of apple, cubes of cheese, pieces of high-quality kibble. They don’t need any more empty calories than they already get.

So anyway. The guy poses a problem. What he really poses is a road block to my favorite garden spot to walk the dogs. I don’t take my dogs to the park because of the large number of dogs, some of them aggressive, running off the lead. So that leaves Richistan as the favored shady dell in which to stroll. To get in there, I’ll have to walk two blocks north and then drop south a block. In theory we could get there by taking the street one block to the north of the Cat Dudes’ house, but that street curves south and debouches back onto our usual street…about one lot east of Cat Dudes. To avoid him, we’ll have to go way out of our way, and also avoid the prettiest streets in that part of the neighborhood.

Milk Bone Ingredients
Highlighted: Things you might prefer not to feed your dog