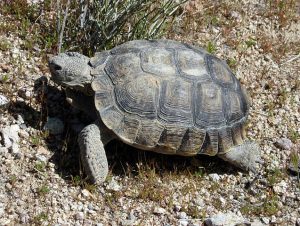 So we’re strolling along a sidewalk in Lower Richistan. It’s after noon, Ruby having had to wait until the Human got back from church to extract a DoggyWalk. As we approach the border of Upper Richistan, we spot a black cat up ahead. It’s messing with something on the sidewalk, presumably some prey it’s killed.

Ruby is more interested in wallowing in the neighbors’ lawns — her favorite pastime, since most yards in the po’ folks’ part of the ‘Hood are desert-landscaped, grass being something that is put out of the hoi polloi’s reach by the cost of water here. So I suggest, “Ruby! Lookit that cat. Git that cat!”

Of course she can’t get it, because she’s stuck on a leash. If I didn’t think she’d chase the thing to Yuma, I’d unhook her. But she can’t be trusted not to run out in front of a car or to follow the cat to Timbuktu. However, the cat hears me and so notices our approach, and it runs away.

I expect to find a dead bird or rat on the sidewalk. But…nay!

It’s a freaking tortoise! A little desert tortoise (endangered species!) about six or eight inches long and around five inches wide. It peeks its head out from its shell to see what the heck.

I ask a kid biking around on a neighbor’s front yard if he knows who belongs to the tortoise. He pretends not to hear me. He’s only about 10, but already his parents have trained him to recognize WT and not respond. Snobsville, and we ain’t even in Snottsdale. Hm.

Not wanting to leave the critter to amble across the roads, I pick it up.

Tortoise recoils inside his shell. Then sticks his head out, realizes he’s in the air, and sticks out his fiercely clawed little feet, which he now uses to try to force the human to unhand him.

I’m trying to figure out how to get a grip on him that’ll last long enough to carry him home, when voilà! Hustling up the sidewalk comes a tribe of dithering humans, led by a visibly distressed female.

“Have you seen a tortoise?” asks the chieftain. She’s so upset she’s almost in tears, and the males she has in tow are not in much better shape.

“You mean this one?”

They practically genuflected on the sidewalk, they were so thrilled and relieved to find their…uhm…pet.

The desert tortoise is protected by law. Fish & Game has a program where you can “adopt” a tortoise and keep it in your yard, registered and checked-on by AZ F&G. They have all sorts of regulations whereby you must house the beast. And no doubt they figured they were about to get in big trouble with Big Brother, to say nothing of losing their beloved baby.