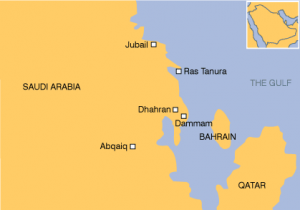 Back at the old homestead, I see, those who wish the Americans ill have bombed a refinery. Abqaiq. Oh, God: define Chez Pitts, and you’ve got it… We lived within driving distance of that garden spot, in another hole called Ras Tanura.

Rasty Nasty, as my father used to call it, was a port for oil tankers. At the time, the refinery was located there — I don’t know, really, whether there was also a refinery at Abqaiq…or what. At any rate, oil was loaded onto the tankers at Ras Tanura, and most of the Americans who lived there were refinery or port workers, plus a few support staff such as teachers, medical staff, and administrators.

Dhahran was largely occupied by administrative staff, plus there was an Air Force base there and also an airport for commercial traffic.

And Abqaiq, out in the most gawdawful desert you can imagine, was an oil field. Horrible places, each and every one.  At the time, Dhahran and Ras Tanura had gated residential communities for American families of company employees; these were isolated small towns, occupied exclusively by Americans, who were there on two-year contracts. The paterfamilias got a three-month leave every two years, for which the company would fly him and his family to New York, or, if preferred, to some European destination, and a two-week leave in the middle of the two-year contract, which most of us would spend in Bahrain or Beirut.

This kind of attack was exactly the kind of thing the company secretly expected, and for which it had plans. In the event of riots or revolution, American family members in Ras Tanura were to be loaded onto buses and driven to Dhahran, where magically we were to board airplanes and be flown out of the country. 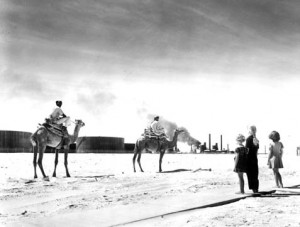 On the two-lane “highway” between Ras Tanura and Dhahran there was an oasis occupied by locals who were, shall we say, less than positive about Americans. Along that road, you could see a billboard that read, in Arabic, “Yankee Go Home.” A pipeline ran out of Abqaiq, which posed a chronic problem: it was always being cut or otherwise sabotaged by the locals.

My father, who was a harbor pilot at the Ras Tanura port, had been a merchant mariner for years before landing the highly paid job that took us to this garden spot. He made his own plans for us, in the case of unrest. We each — my mother, my father, and me — had a grab-and-go suitcase, always packed for a quick escape. (Mine contained my favorite stuffed animals.) Because of his long experience at sea, he knew most of the tanker captains well.

He had made arrangements with all of his tanker-commanding friends to take my mother and me on board should the need arise. We would be hidden until the ship could set to sea (which you may be sure would have been forthwith), and carried through the Persian Gulf, out the Strait of Hormuz, and thence to the Suez Canal. The company confiscated our passports when we arrived in-country, and so we would have no papers. We would have had to be taken someplace that had a US consulate to be let off the ship. Cairo, presumably?

My father had somehow smuggled a pistol into the country, which he hid somewhere in the house where even I couldn’t find it. (That was saying something: I could find almost anything in that place.) He planned to use it in the event riots got inside the camp.

But of course, when the time came…well…he wasn’t there. That night when rioters did almost break through the Main Gate, he and my mother were playing bridge at the home of another couple. My best friend Pamela was staying the night at our house. We slept through all the excitement, and neither we nor our parents had a clue until after the fact. Had the insurgents managed to get into camp, my father wouldn’t have had a chance to get back to the house to protect us, and of course we wouldn’t have had a chance to defend ourselves, either…because I had no idea where the gun was. Nor would I have known how to use it.

What a horrible place it was. Living there was like living in a remote small town in the Southwest — such as, say, Ajo — only with no access to a city, no escape from the social pressure-cooker, and little access to free news reporting. Summers were almost as hot as Arizona‘s, only it was not by any means a “dry heat.” When you would wake up in the morning, water would be dripping off the eaves and puddling on the ground — so humid was the air that once I was standing in the front yard when rain began to fall out of a clear blue sky.

At least the residents of Ajo are not universally hated by the locals — what few of them remain after our ancestors leveled the place. It’s hard to say that’s a “good” thing…but it’s one helluva lot better than having to live in fenced, guarded compounds.

Y’know, there are a lot of good reasons for America to reduce its dependence on oil. Climate change may be the foremost among them. But Saudi Arabia is a close second.

3 thoughts on “Saudi Arabia: SO glad to be gone…”