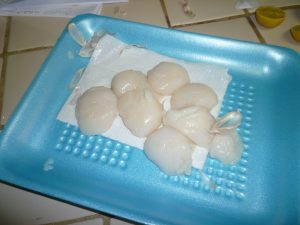 I love scallops, having learned how to cook them properly from that august avatar of Bumhood, SDXB. And every now and again, Costco sells packages of wild scallops — especially at the stores in fancier parts of town. So the other day when I was over at the Paradise Valley store, I grabbed a packet of the things.

They freeze reasonably well (in fact, the scallops Costco sells on the fresh-fish counter are “previously frozen”), so buying a lifetime supply is a rational thing to do. Divvying it up into seven scallops per serving (which IMHO is probably excessive) gave me three meals’ worth.

Sauteed scallops are exceptionally delicious when served over carbs: pasta (!!) or rice (!). But I’m going to fat again, so trying to stay away from comfort foods full of flour, rice, and potatoes. So decided to serve these things only with a side of fresh veggies. Ideally, I would’ve coveted a side of roast asparagus. But lacking asparagi and feeling no compulsion to drive out into the homicidal rush-hour traffic, park, dodge panhandlers, stand in line to pay, dodge the bums again, and drive back home, I decided instead to use some of the chard that grows in the backyard. Also residing in the backyard: a crop of fresh, juicy, tree-ripened limes. The result was very pleasing.

You’ll want to set up everything for both dishes before starting to cook, because the cooking goes very fast. So first, dry the scallops on some paper towels and sprinkle lightly (if desired) with cumin. Place a chunk of butter in a frying pan. Slice the lime or lemon open, and of course pour yourself a glass of the white wine. 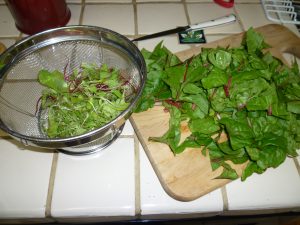 I added some beet and lettuce sprouts culled from an over-enthusiastic new garden crop… Mix & match as desired.

Also, roughly chop the greens. In another frying pan, pour in enough olive oil to lightly cover the bottom of the pan.

Because the greens will take just slightly longer than the scallops, you’ll want to start with them but have the pan for the scallops ready to go.

So, heat the pan with the olive oil over a medium to medium-high fire. Toss in the cut-up greens.

Immediately turn the heat on under the scallop pan so as to melt the butter. Stir the greens while waiting for the butter to melt; as soon as that happens, toss in the chopped garlic.

Stir the garlic around for a few seconds and then add the scallops. Gently cook the scallops over medium- to just barely medium-high heat until they’re cooked through, which will not take very long. Do not overcook. They should just begin to brown, but probably because the butter is browning more than because the shellfish is browning.

At this point, squeeze a generous amount of lime or lemon over the scallops. If you don’t have any citrus, then just splash in some of that white wine you’re drinking. You probably could add the wine with lemon or lime, but I personally prefer one or the other.

Quickly remove the shellfish and the veggies to a plate. Serve with…yeah…the wine.

How can you lose? 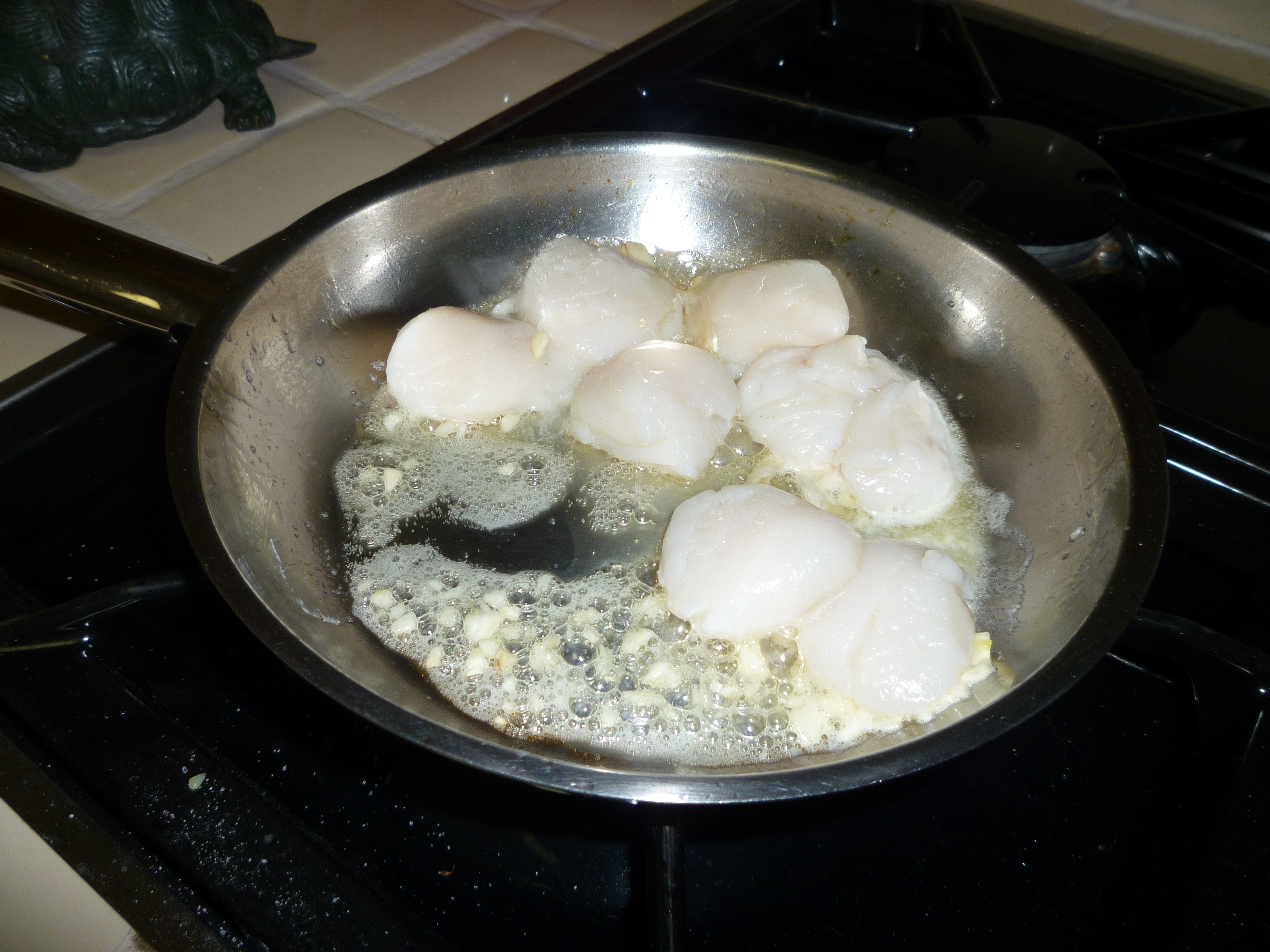