Here’s a poem that Puerto del Sol published some time back. Truth to tell, the content is from a letter I sent to my son when he was in college. I’d retrieved a set of my mother’s stoneware from a dank storage bin at my Ex’s house — she died a year before my son was born. I guess the headnote is part of the poem… 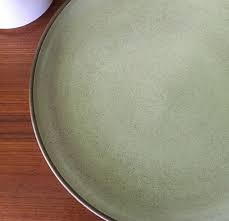 After two years of searching, my ex-husband and his new wife find my mother’s stoneware dishes, right where he/i/we put them, must’ve been ten or fifteen years ago . . . in the tin shed behind the carport, cardboard boxes rotting off them like peeling sunburned skin, roach grubs and scorpions scuttering in and out, but amazingly they’re all intact, or as intact as they were when they came into our hands. I write to my son about the dishes and his dead grandmother, whom he has never known.

It was all Denby and Heath in those days.
That was what the young society matrons
had because of course that was what one had.
Denby. Heath. Big lurching plates in dark lurching
colors, swamp green and mud brown and marsh blue
lighted here and there with dabs of St. Elmo’s fire:
orange and gold.

Well so I had to have some Heathware because
your dad and I couldn’t afford Denby
Though Sara B* had Denby, wouldn’t have
anything else and somehow Barbara B**
got Denby, too, well because her mother
worked in a jewelry store
(shh) and got (a discount).
So what I chose was olive green, not to say
avocado green. “Choose things that don’t
go out of style,” she used to say.

And that was what she would buy for me,
ageless clothes that stayed presentable for
ten years and looked like they were purchased
for my grandmother.

It never occurred to me that olive plates would
someday say, enunciating crisply, “Nineteen-sixty-seven.”
How could we ever go out of style?

The bridal buying frenzy infected her.
After I was settled in my new house she
remade her empty nest. One of the things
she refilled it with was a new set of stoneware,
just like the stylish young women’s: Heath.

Only she picked white. White with dust-brown unglazed rim.
Alabaster and earth.
Simple. Clean. Understated. Elegant.
And god help us,
to this day
they’re the height of style. 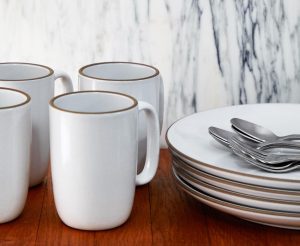 4 thoughts on “She had good taste…”