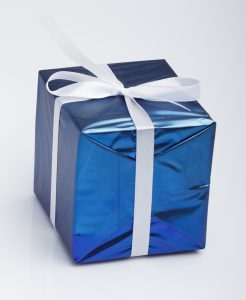 Some things in life have some surprising little benefits. You’ll recall the monster theft-resistant mailbox I spent $400 on, after purchase and installation. Eight months later, that did pay for itself, yea verily on a day when a large check from PayPal arrived. That’s nice, but a once-in-awhile occurrence. Interestingly, that pricey mailbox has another distinct advantage, one that applies daily: it frees you from having to retrieve the mail every single day, as soon after the mailman shows up as possible.

About 98% of the snail mail these days goes directly into the blue barrel. In fact, I’ve even thought of leaving the blue barrel at the curb and asking the mailman to just throw all the mail right into it. 😀

He’s prob’ly not allowed to do that, though…

Yesterday I emptied the mailbox of about ten items, most of them in large 9 x 12 envelopes or just packets of loose paper. Every single item that had been delivered was trash. Is it a minor annoyance, in the large scheme of things, to have to go collect fistfuls of trash that idiots send you in the mail and walk it over to the recycling bin? Well, sure. But nevertheless, it is an annoyance. And IMHO we have enough of those.

With Ft. Knox out there, I pick up the mail two or maybe three times a week. I no longer have to sift through trash every day looking for the few important documents that are mailed to me. So it cuts the annoyance factor some.

Speaking of annoyances, I see Big Pharma has gotten wise to the several ways consumers have contrived to foil the damned consumer-proof lids. The last two bottles of cough medicine I bought each had lids that could not be broken apart with a few hammer blows. In fact, the one I got this morning was engineered so that the inside cap shattered when I belted the damned spinning outside cap with the hammer.

Fortunately, I’m a little old lady and so I save every piece of junk that comes my way. I can not, for the life of me, throw out an old spice jar.

Spice jars hold  just about the amount of liquid in a standard grocery-store cough medicine bottle. And they have lids that work. They are, in a word, perfect for the purpose. Small serendipity, indeed.