LOL! If this tale weren’t so pathetic, it would be hilarious. Wait…maybe it is hilarious! 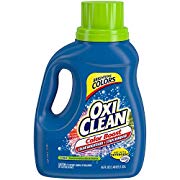 You’ll recall that a week or so ago I discovered that the latest casualty to the Third-Worldization of America is non-chlorine laundry bleach. To my astonishment, I couldn’t find a bottle of it for love nor money, not even at the Albertson’s — a large purveyor of grocery and household goods.

Okay. Couple days go by and I get a message that this fine product is to be delivered to my doorstep on thus & such a day…by 9 p.m.

Say what? You’re planning to deliver this thing after freaking DARK, here in Porch Pirate Central? Seriously? Well…yeah. As the appointed delivery draws nigh, the “track your package” function indicates the delivery dude will be along, sometime around 9 p.m.

As you’ll recall, I’m at Death’s Door here. Visited the ER four times over the past week. And absolutely positively am NOT of a mind to lurk by the front door till nine o’clock at night. Or later.

Certainly not for a delivery guy who can’t tell north from south. And who has yet to figure out that Erewhon LANE is not the same as Erewhon WAY, or that odd-numbered properties are on the south side of the streets in Phoenix and even-numbered houses are on the north side. That latter probably wouldn’t help, since the poor soul doesn’t know which way is north.

It must be said, in fairness to the hapless underpaid overworked delivery guy (What kind of company makes its workers run around the city until freaking NINE O’CLOCK AT NIGHT?), that the local porch pirates watch for Amazon and UPS guys, actually tail them around the neighborhood, and when a package is delivered to someone’s door, they drive right up to the front sidewalk, stroll up to the house, grab the package, toss it in the back of their car, and continue on in pursuit of the delivery guy. One of our neighbors, a techie by trade and by hobby, has rigged his entire front yard and street with a security camera system…every now and again, he’ll post a video showing exactly that M.O.

But that notwithstanding: having your employee deliver merchandise at 9:00 at night? Hiring drivers who can’t tell north from south and Avenue from Street or Lane from Way? Not even in broad daylight, to say nothing of by the dark of night… What is wrong with that picture?

So this fine product never shows up, not surprisingly.

I get an Amazon CSR on the phone — a very nice lady who lives in Jamaica — and explain that I would like not to be billed for a package that never showed up.

Ohhh, noo, says she. We can fix that! So she arranges for another bottle of Oxi-Clean to be delivered post-haste. She is exceptionally charming, and it’s hard to stay miffed with Amazon after chatting with this lovely person.

Now I get more messages of the track-your-package variety. This one says — incredibly! — that they plan to deliver it by 9 p.m. tonight. That’s NINE P.M. ON HALLOWE’EN NIGHT!

Ha haaaahhh! I have to ask: how hilarious is it possible to get?

Well, I’ll be perched in the neighbor’s driveway most of the evening tonight (it being Hallowe’en), partying and handing out Costco candy to the kiddies. So if I see the Amazon guy cruise up, I can grab the package before anyone else does. With any luck.

This assumes the Amazon guy can find my house, for a change.

So I’m sitting here coughing, when along comes this amazing email:

We won’t be able to deliver your package as it’s been damaged.

The package is now being returned. We’re very sorry for the inconvenience.

A full refund will be processed within the next 24 hours and should appear on your bank account within 3-5 business days. * We will notify you when your refund has been processed. If you don’t receive a notification about your refund, please contact us.

Now I ask you: how ludicrous is that?

What on earth do you suppose this absurd message means? How do you “damage” a plastic gallon of non-chlorine laundry bleach, packed in a sturdy cardboard box? Run over it with your truck? 😀 And how do they propose to work a “full refund” when a refund was already issued for the first effort to deliver this package?

It’s disappointing. Amazon’s delivery service has been a big help to me as I’ve become busier and also more reluctant to navigate the city’s increasingly insane traffic, and so I’d begun ordering more and more incidental items. But evidently, that is not a good idea. One would do much better to resign oneself to driving from pillar to post to find products that are going off the market (to some degree, no doubt, because of competitive pressure from Amazon) than to be run through a silly circus like this.

BTW, next time I have to deliver my neighbor’s packages that were misdelivered to my front door, I’m going to charge Amazon for my time: $60/hour.

2 thoughts on “So Much for Amazon…”