Loafing away the afternoon. In another couple of hours, have to leave for our beloved Tina’s wedding reception. In between times: doing exactly nothing.

Yesh. Remember Revanche‘s angst over the wedding and the family and all that? Well. The drama in Tina’s family rises to match Revanche’s…and like Revanche, she seems to have the strongest grasp on her sanity in the tribe. No. That’s wrong. She has a fully sane sister. But since it’s a LARGE Italian-Mormon family, that means it’s two against…well, against a roistering party. 😀

Tina, being a pretty smart little bird, came up with a particularly fine idea: She and Fiancé (now DH) eloped to the County Courthouse, adorned in their best bluejeans and silliest T-shirts, where they tied the knot in public privacy, unaccompanied by hysterical family members. She sent over a picture…I don’t think I’ve ever seen her looking happier.

Then they arranged a reception at a favorite restaurant — and paid the restaurant to do all the heavy lifting! We — her crazed family and followers — all meet tonight to toast the Event. Which, we might add, occurred about two weeks ago, allowing plenty of time for some of the dust to settle.

About all I’ve accomplished this week is to create a new website for our networking group, the Scottsdale Bidness Association.

It turned out pretty well, IMHO. Our former Web guru, a long-time Arizona art director whom I’d met on the job at Arizona Highways days, used to be a member of the group and had taken on the job as a kind of low-paid lagniappe. At one point, though, he packed up his business in a cedar chest and took a full-time job (gasp! can you imagine?) producing a monthly custom magazine for a national company based in Scottsdale. Recently, after several years at that gig, he took it into his head to retire.

In the process he shut down his account with the web host he was using, thereby killing our much out-of-date website.

I managed to retrieve the content from a cached version. A couple of pages needed to be completely revamped, but three of them required only minor tweaking.

That’s a very ordinary WordPress template, but I think it looks reasonably nice. As freebies go, that is. We’ll use the right-hand sidebar to post a plug for our charity, Every Kid Counts. Here’s a draft of the widget: 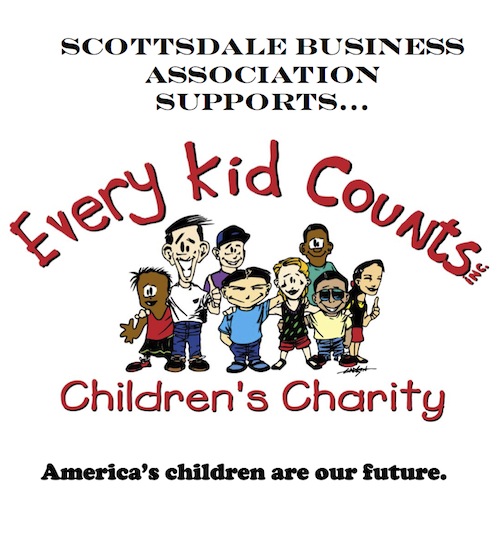 (If you’d like to donate, it’s never too late!! Click on the image to go to their website.) This group serves poor kids in one of the city’s most underprivileged school districts…and in Arizona, that is sayin’ something. It does a lot of good, and we’re proud to participate.

Right now I’m just waiting on approval of that design…probably will put it up this weekend or early next week.

Beneath the EKC widget, I propose either to arrange all our company logos, into infinity (which I think would make the site look unduly strange), or, if we can swing it, to post a “Member of the Week” or “Member of the Month” widget.

This sounds like a PITA, but once the widgets are built, I don’t think it will be. We have one member speak each week (see the  Calendar), and so what we could do is make the current speaker be the Member of the Week. With the widgets stored to WordPress.com, it would just be a matter of moving one widget down to the unused widget space and snaring another to move up into the sidebar.

To build visibility, I’d love to use the site’s blog function (it is a blog, with a static front page and, so far, no posts) to publish our dog-and-pony shows. Doubt that’s going to work, though: many of us speak ex tempore and so don’t have prepared speeches. One guy, a former high-school teacher, does some awesome presentations using videos and PowerPoint, but even he probably doesn’t have a speech written out.

So…I don’t know what to do about that idea. Probably nothing.

Otherwise, it’s been a day in La-La Land. I’d planned to run errands at three venues today. Jumped in my car, drove and drove, got to the first place, shoved my way into a parking place…and realized I’d left my purse at home.

At OGGS, I came across some artisanish mayonnaise that contains no sugar and that looked like it might actually taste like mayo used to taste. And yea verily, it does: rather better, actually, because it uses stone-ground mustard instead of mustard powder or Dijon.

I happened to have a can of pink salmon lurking on a shelf. So mixed that up with a quarter of an apple (minced) and a few capers. The result was quite tasty!

LOL! Having bought some Overpriced Gourmet Seed-Strewn Crackers caused me to remember, on the way home, that when I was a little kid (in another century!!), my mother and I used to make a snack by spreading mayonnaise on Saltine crackers.

They were so good!

Can you imagine? I haven’t even seen a Saltine in years.

Women used to use them to fend off morning sickness. The idea was that you should munch a Saltine before you lifted your head from the pillow. 🙄 I never found that very effective myself. But then I didn’t have morning sickness. I had morning-noon-and-afternoon sickness.

It’s getting late, so I must get ready for the evening’s shindig. Luz the Arborist was just here. He reports that the traffic between here and the East Valley is truly horrible, so I suppose I’ll have to get an early start for lovely downtown Tempe.