Okay, I know it’s utterly graceless to bring this up…but when Cassie shuffles off this mortal coil — which probably will happen within the next few days or even hours — then what am I gonna do?

Cassie had a very bad night — labored breathing, panting all night long (I know: I was awake listening to her). And she has decided eating is a thing of the past. She flat out refuses to eat. Yesterday I did get a 2½-ounce bottle of puréed baby-food turkey down her. But this morning, offered puréed chicken, she wouldn’t touch it. Even swallowing the mush seems to be difficult for her.

I’m trying to move tomorrow’s 8:30 a.m. veterinary appointment up to 11:30 this morning, which will mean I’ll miss the choir event I want to participate in this afternoon. My guess is the vet figures he’ll have to put her down, since nothing is helping her and I’m not in a position to spend thousands of dollars trying to revive a 12-year-old dog who’s probably on her last legs, no matter what we try to do.

For quite some time, I’ve had my eye on this dog. The rescue has had the pooch for awhile… And I do miss my German shepherds. That would be why I tend to revisit the GerShep rescue page. Do I want to apply for Lionel/Johnny? He’s a handsome fellow, about the right age, already house- and leash-trained. And white GerSheps tend to have better temperaments and overall better health than the horrifically overbred black-and-tan lines. No one wants white GerSheps because they tend not to bite and they’re not very threatening. 😉

Herein lies the issue: The whole matter of what happens after Cassie is gone represents a tangled mess of questions:

Should I stay in this house, or move now, while I still am physically able to do so?

• The surrounding area is really not very safe, and the city seems to be actively working to trash the area, letting drug-addicted transients ride the Blightrail for free, dumping them off at the end of the line on Gangbanger’s Way, building yet another meth clinic in the neighborhood (the 24-hour one around the corner serves over two thousand hopheads a day!) and planning to trash Gangbanger’s Way by running the Blightrail west and east to planned terminuses in two ghost malls. This will bring even more crime and drug addicts than we already have, which is more than enough thankyouverymuch.

• Consequently, I don’t feel especially safe here. The solution is the same solution that served well in the similarly besieged Encanto District, where my ex- and I lived for some 15 years until we threw in the towel because we had the unreasonable idea that our little boy should be able to play outdoors in relative safety. The solution: a German shepherd dog.

• On the other hand, the only other two places in the Valley where I can afford to live and that I think I wouldn’t hate are so far away from the centers of my social life that moving there would bring a screeching, permanent halt to my social life. I do not make friends easily (not by a long shot!) and so effectively this would mean the end of any activities outside the living room, the bedroom, and the backyard. Permanently.

• Houses in the ‘Hood are affordable because of the increasingly dangerous slums along Conduit of Blight Boulevard and the meth gang’s territory north of Gangbanger’s Way. We form a kind of middle-class buffer zone between these increasingly creepy, declining areas and a very upscale district called North Central, where free-standing houses start, on the low end, at around 700 grand. The houses in this neighborhood, especially if they’ve been kept more or less up to date and in good repair, are twice as much house than you can buy for the same money elsewhere in the central Phoenix area — both in terms of size and in terms of quality.

Comparable houses (sort of) in the “Arcadia Lite” area, for example, run upwards of $500,000…and they’re NOT comparable: they’re older, smaller, and they don’t even have garages — they were built back in the day when it was safe to park your car in a carport.

• Only two areas of the Valley offer housing that’s comparable to mine in a price range I can afford: Sun City and Fountain Hills. Sun City is halfway to freaking Barstow; Fountain Hills is halfway to freaking Payson! They’re both a long way from the people I know, the things I like to do, and the places I like to go. Ruby the Corgi would be placed at huge risk if I moved her to Sun City: the place is truly overrun with coyotes, which have been known to jump a six- or eight-foot back wall, grab a small dog, and fly back out of the yard with it before the human can budge. Fountain Hills also has coyotes — and the occasional bobcat. It also has ticky-tacky construction — the type where you consider a house “old” after ten years. Sun City has low property taxes, but it’s like living in a mausoleum. Fountain Hills would be like moving to another town altogether.

So that leaves…well…stay here or move to Fountain Hills. This right here is about what I could afford in Fountain Hills. I hate it. I’ve always hated those stupid fake-arch windows that were the rage in cheap tract housing a few decades ago…and just look at that hideous stuff they put on the things! And one of Fountain Hills’ lesser charms is that it has no natural gas service, and so you’re stuck with those horrid glass-top stoves. Ugh. I’ve tried to learn to live with one of those things — Satan and Proserpine put one into this house. Loathed it: never could get used to it. Plumbed in a gas line and replaced the damn thing with a real stove. Though Fountain Hills has much to recommend it, the distance from activities and friends, the ticky-tacky architecture, and the all-electric kitchens add much to de-recommend it.

If we say that leaves one option — stay here — then we’re brought back to our starting point, where housing is concerned: this area is unsafe.

Next question: Assuming I stay here, should I get another German shepherd?

•  About every third house in the ‘hood now houses a large dog, many of them mighty ferocious-looking. The reason for that is obvious: I’m not the only one who feels unsafe in an area overrun with drug-addicted transients, burglars, and car thieves. The only way the ex and I were able to stay in the Encanto district as long as we did was that we had Greta the German Shepherd, she who chased out a cat burglar at three one morning, who stood between me and a guy trying to break down my front door, who saved my child’s life twice, and who had the most preternatural sense of human nature I’ve ever seen in man nor beast.

• Having lived with several GerSheps since then, I can attest that though none of them were Dog Geniuses in the sense that Greta was, all of them served as effective sh!thead deterrents. NO ONE bothers you when you have an animal like that standing at your side and glowering in their direction. But…

• German shepherds are expensive to maintain. Although it’s likely that the white line will have fewer inbred health problems than the black-and-tan model, you can be sure that even a white GerShep will be a walking vet bill. A gun is far cheaper, over the long run. Though it doesn’t make for very good company…

• I am getting to be an old lady. Chances are good a reasonably young dog will outlive me. Then what happens to it? 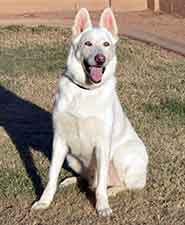 This Lionel/Johnny hound looks, in the group’s uninformative photos, to be about three years old, maybe as much as five. German shepherds typically live about nine to twelve years. In six years, I’ll be 79; in nine years, I’ll be 82 years old! Do I really want to have to deal with a sick 90-pound dog at that age? Would that even be possible?

• Would a smaller dog have the same deterrent action, allowing me to feel safe living in my home? No. I already have another smaller dog: Ruby weighs all of 20 pounds. First: a yapper does nothing to discourage an accomplished burglar or a wacked-out meth addict. Second, a small dog cannot hold its own against a coyote — which our neighborhood also hosts, though not in such gay abandon as Sun City does — but a German shepherd most certainly can. And third, perps think little dogs are cute (or annoying), same as you and I do: they’re not deterred by a bouncy yapper.

Welp: no word from the vet’s office about taking the dog over there at 11:30 this morning. So I guess it’s off to choir for me. Time for a shower and a paint job…