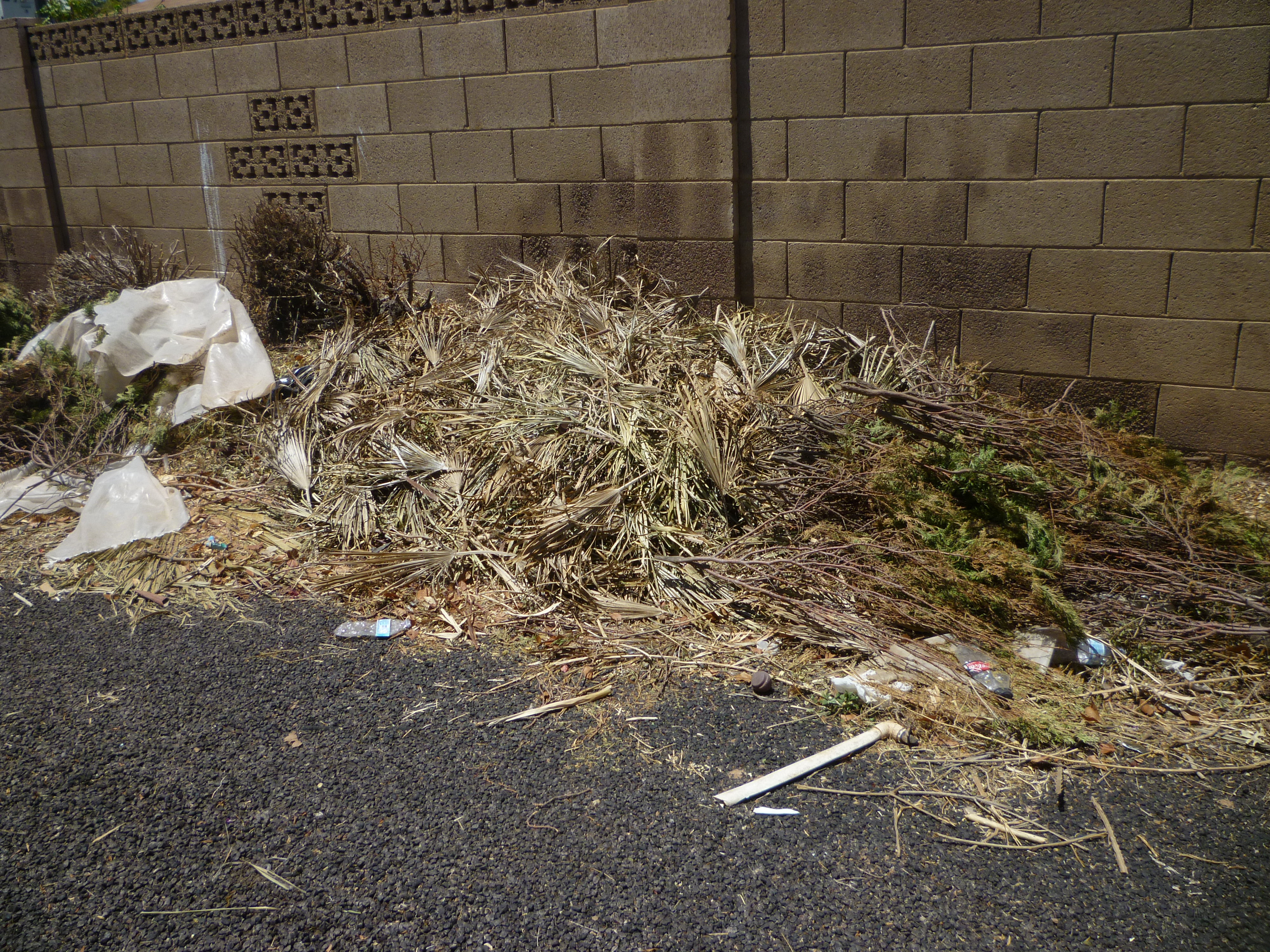 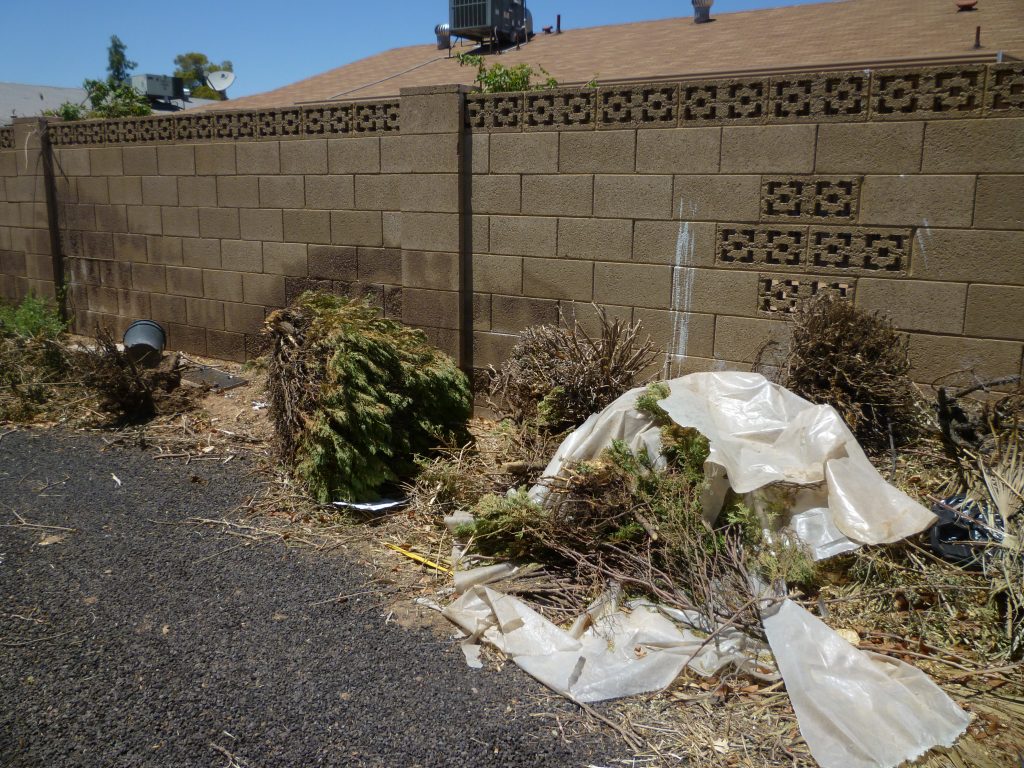 And how would you like to hit this chunk of concrete in your car or truck, while you’re tooling up the alley? 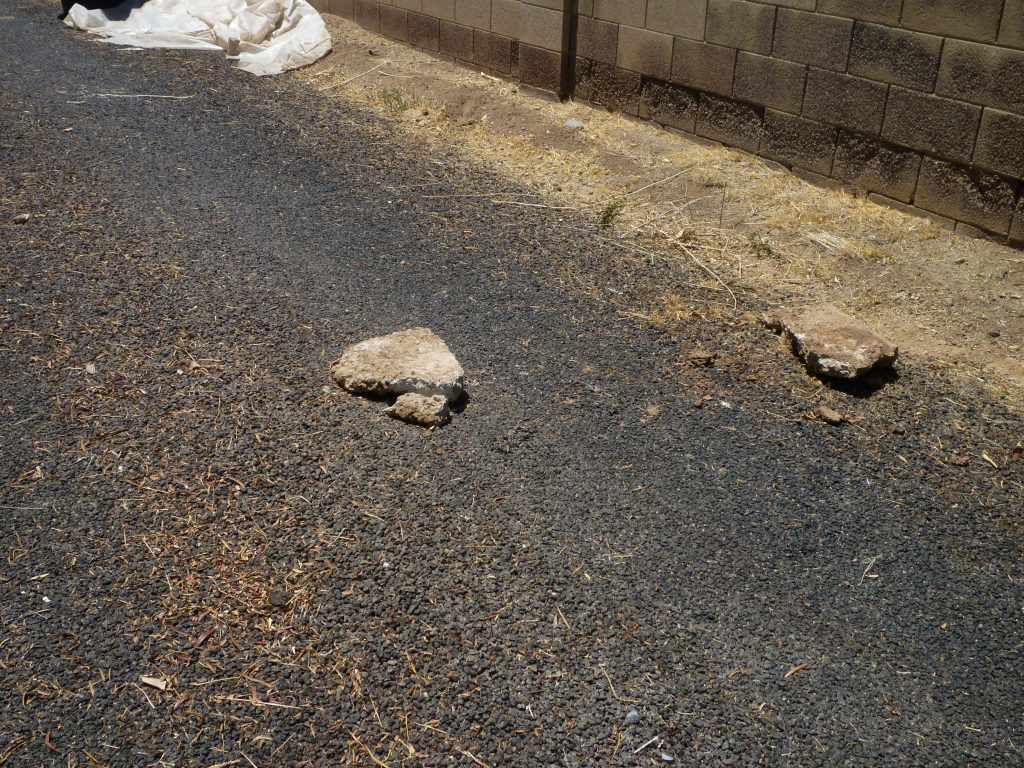 Guaranteed to take out your oil pan!

That crap is the dried-out remains of my former neighbor Sally’s backyard landscaping, which the new young owners have hacked out and dumped, higgledy-piggledy, into the alley. It’s actually less of a mess than it was: at first they just dumped it all over the thoroughfare. After a week or so, they (or someone) went out there and stacked it against the kids’ wall. More or less. Except for the chunks of concrete, which they left there to catch an unwary motorist.

See that thing that looks like a shrub somebody yanked out by the roots and threw on the ground? That’s a juniper. Juniper is one of the most flammable plants you can put in your yard. And all that loose debris? It’s been there a good ten days: drying out in 108-degree heat. It is, in a word, a pile of tinder.

The day after tomorrow is the Fourth of July.

Every July 4, people sneak into the alleys — ours included — to shoot off marginally legal and illegal fireworks. Our idiot legislators, who confuse “fireworks” with “firearms” and so must preserve our right to carry them, did away with all state regulation of consumer fireworks. They did allow a few cities to lay down limits…but their workaround for that was to pass another law stating that cities and counties cannot tell retailers not to sell any fireworks they please — whether or not said fireworks are illegal within the city limits;.

City to Morons: You can buy these things that will blow off your hand and blast out your eyes but you can’t set them off.

So now every July 4 and every New Year’s, we have chuckleheads blasting powerful, dangerous fireworks in every neighborhood. And since some of these things are illegal to shoot off inside the Phoenix city limits, they sneak into the alleys to play, where they think they won’t be seen.

Well, my back wall is covered with a vine called cat’s claw. Satan and Proserpine planted it there, and I’ve let it grow because I like a whole lot of privacy around my pool. And everywhere in my backyard, for that matter. The building code forbids a backyard fence higher than six feet, but nowhere is there any law that says ornamental plants growing along a back wall can’t be as high as you like. So one way get around this regulation — other than ignoring the law and stacking block eight or ten feet high — is to plant oleanders, vines, and other plants that will block the curious and the criminal from peering into your backyard.

Cat’s claw can pile up on your fence to make a ten- or twelve-foot high barrier. But of course…it’s a plant. Far as I can tell, it’s no more flammable than any other ordinary plant — nothing that I’ve looked up mentions flammability as a problem, in the way that juniper and eucalyptus and cypress are problems. That notwithstanding, Gerardo keeps it trimmed up about four feet off the ground. Still…it is a plant. And there is a lot of it. And people who sneak into alleys to shoot off their illegal fireworks do not give one thin damn about the safety of your property.

Nor, speaking of thin damns, do the neighbors. Their piles of debris are easily three to four feet deep. If that stuff catches fire, the likelihood that it will jump across the alley and set my landscaping plants alight is extremely high. Not just the cat’s claw, but the palm trees (four of them) and the citrus and the devil-pod tree and the paloverde and the olive and the …yeah: and the roof of the house. All it will take is a stiff breeze — like the one we had late this afternoon — to spread sparks from here to Hell.

So this morning I went over and visited the guy who seems to be in charge. Explained the problem. Would he please have that stuff hauled off, it being illegal to dump in the alley?

He refused. By way of blowing me off, he actually said (can you believe this?) that the City’s bulk trash collection was supposed to come by before July 4.

That’s the day after tomorrow. Did I mention that?

Well, anyway: no. Look it up online, where it’s always posted. They won’t even start bulk collection in this area until July 30.

My insurance agent advises that I should call the city and launch a complaint. He thinks everything possible needs to be done to eliminate risk of a house fire.

My son, who also is in insurance, thinks this would cause neighbor trouble, big time. He suggests making a record to the effect that I asked them to get rid of the flammable debris — like sending them a registered letter! My insurance company would then have a paper trail so as to file a claim against their insurance company.

Heee! This is supposed NOT to cause neighbor trouble?

Even if a registered letter could get there by tomorrow(!), that sounds like an exercise in futility. But I do have a record: my camera dates its pictures. And I’ve just described my exchange with the jerk here in WordPress, which also dates content.

Interestingly, it appears that the guy is staying there. His decrepit truck has been parked on the street day and night — all night — for as long as the landscaping exploit has been going on. After I walked away, I heard the woman come outside and ask him what I wanted. So she does know that I asked him to clean up the mess.

I figure he must be a relative or a friend who agreed to help them with their landscaping project.

Whatever he is, he sure ain’t a landscaper!

What a mess they’ve made of Sally’s formerly dull but pleasant enough backyard. They’ve pulled out all the planting except three or four scrawny cape honeysuckle up against the back wall. And they’re spread some sort of dust-like top cover all over the back yard, with no break or planting or anything.

I don’t know what it is, only that it’s not quarter-minus. It’s like a fine dust. Weird.

These are the people who claim to want four children. They’ve already started toward that goal. Maybe they think they’ve made a giant sandbox???? I wouldn’t let a child play in that stuff on a bet: it’s Valley fever waiting to happen. And Other Daughter’s damned cats habitually used Sally’s gravel — real gravel, the heavy stuff — as their catbox.

Ugh! It won’t take long for those animals to saturate that powdery stuff with cat urine and cat shit. What on earth could they possibly be thinking?????

Anyway, absent certified letters, my plan is to go out there along about four or five p.m. on the Fourth, haul the hose with a sprinkler to the far side of the pool, and soak the bejayzus out of those vines. Get them all very, very wet, like totally drenched.

That way if a moron does get a fire started in that debris, sparks that hit the vines probably won’t set them alight. At least, given that cat’s claw supposedly isn’t extraordinarily flammable, there’ll be a fair chance that they’ll resist burning if they’re already good and wet.

If the wind comes up, though, there will be nothing I can do should sparks or embers reach that damn weeping acacia. Those trees are as flammable as eucalyptus — which is very — and the thing is a good 40 or 50 feet high.

Damn, but I’m tired of dealing with other people’s stupidity.