So, we’re a week into the Great CBD experiment, in which we massage a snake oil concocted from marijuana into selected specimens of the myriad lentigos (“sunspots,” “age spots”) that infest my hide. The research question: Does this stuff really fade age spots and help heal actinic keratoses, as its enthusiasts claim?

So far? The jury is decidedly still out.

The Map of Australia, which decorates the finger-flicking digit on my left paw, appears to be slightly lighter. Or…that could be wishful thinking.

The Great Blot on the face: hmmmm….might be a tiny bit lighter, but probably not. 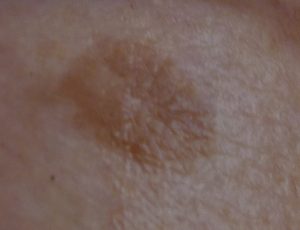 This one already has a lighter area in the center; a week ago, when this image was made, it was uniformly brown across its diameter.

The ominously two-toned blot on the right shin seems possibly slightly lighter, and the dark brown patch within it is blending with the remaining area: little by little, but by now noticeably. Another large spot on that leg is developing a light-colored center, like the ones on the left shin.

One set of relatively small spots on the left forearm has faded significantly. A larger spot nearby: I can’t see much difference.

Others, I would say, seem fundamentally unchanged.

LOL! We have a month to go in Phase 1 of our moment of science. This should be entertaining.

If it doesn’t work, then what???, given that you can’t persuade dermatologists to freeze them off, the way you used to be able to do? Interestingly, Amazon carries hydroquinone creams galore — they’re all 2%, but you could simply apply them more often to get more on the things. You can buy retinoid cream there, too, also at 2%. So I’m going to give the CBD a month. If it hasn’t started to make a noticeable difference, compared to the photos I made, then I’m going to order up one of these others.

Meanwhile, the dermatologist recommended Elta’s 50 SPF zinc sun-blocking cream, which, interestingly, she peddles out of her office. Seeking to buy it for fewer dollars, I ordered a tube of that from Amazon: a bargain at a mere $24.50 plus 10% tax, for a supposed three ounces.

Rip-off, IMHO. The tube that arrived was about 2/3 full, making it appear in the photos that you would be getting a lot more. And of course, as we know, an SPF of 50 gives you about 1% more protection than SPF 30, so there’s really no point in paying more for a higher number. 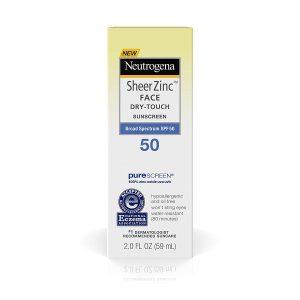 Over at Fry’s — Arizona’s answer to Kroger — what should I come across but a much larger — and fuller — tube of Neutrogena zinc-based SPF 50 sun screen….which goes from Amazon for all of $8.99. This, I put in my car so that I can smear it on my hands — which are in water so much that nothing I put on in the morning is going to stay put for long — every time I get behind the steering wheel. I must say, the Neutrogena is far superior to the Elta, in terms of use. The Elta is so greasy as to be oily. The Neutrogena, though it’s a little thick and asks for some rubbing to spread it on smoothly, is nongreasy — has about the character of an ordinary skin moisturizer.

Both of them, being zinc products, spread a white film over your skin. Don’t panic! You can rub most of that in, plus if you just leave it alone for awhile, the whitiness of it will melt and fade. Put the stuff on, go on about your business for awhile, then put your makeup on, and no one will be the wiser.

Men: I dunno if I’d apply this stuff directly after shaving, especially if you use a razor blade for the purpose. It might be OK right after using an electric shaver, but try it on a small patch first, before slapping it on like aftershave. It could be that either way, if you shave first, then putter around with feeding the dog, grabbing some breakfast, and getting dressed, it will feel OK having given the hide half-hour’s after-shave rest.