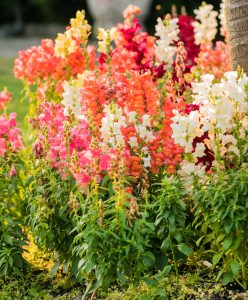 What a gorgeous morning! A beautiful spring day: October being Arizona’s answer to spring.

While I was at Home Depot buying the possibly dysfunctional hose yesterday, I also picked up packets of seeds — beets, various lettuce-like creatures — which I’ve planted in large pots strategically placed in the front courtyard’s sprinklers.

Surprisingly, the Depot’s selection of seeds was piss-poor. Actually had a hard time finding lettuce seeds. Which is crazy: winter is the time to grow lettuce here. It doesn’t freeze (nor is it likely to be at risk thereof, given the steady climate warming we’ve had: we haven’t had a hard frost in years), and it loves the mild winter temperatures of the Valley of the We-Do-Mean Sun.

The chard I planted last fall survived the summer and is still going strong. In fact, I plan to have some of it with lunch.

Other things fried over the summer, though. A new rosemary plant joined the nascent lettuce in front — I do hope it will like it there. Bought another thyme plant, which I also may put in front, where it will get plenty of sun and water. Although…thyme would probably rather have more sun and less water. And grabbed a spearmint critter, which probably will take up residence happily on the shaded west side.

And of course I couldn’t resist a six-pack of snapdragons. How could anyone?

The rose vines here on the west side, the ones that help create the Shady Bower, are looking pretty peakèd. Though they’re putting out some new growth, a few weeks ago you couldn’t have convinced me that they survived the summer’s ungodly heat. They may come back this year, but I’m pretty sure that next fall I’ll have to take them out and replace them with babes.

IF, that is, I can find anyone that still sells rose vines. May have to order them online. Not what I like to do: one prefers to see what one is getting, when it comes to plants.

The backyard is a bit of a wreck. Gerardo hasn’t been here for a month and a half — hence the $285 bill to hire a real irrigation guy to replace the watering system’s control panel, a job Gerardo would cheerfully do for twenty bucks and the cost of the panel. I don’t know whether he’s sick, harassed by Trump’s troops, or what…but if he doesn’t show up pretty quick, I’m going to have to find another lawn dude.

My neighbor Terri has a guy who does an adequate job on her yard. She shows signs of being no less tight than me, so I imagine he can be hired for a reasonable figure. Next time I see him, I’ll try to waylay him. 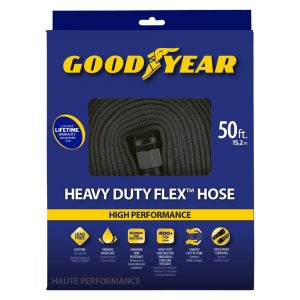 On the subject of said collapsible garden hose, so roundly hated by Amazon reviewers… Well. I installed it on the backyard spigot, which is equipped with an Orbit dial-type mechanical timer, renowned for its annoying habit of leaking. And here’s what happened:

By “it,” we mean the Orbit timer, all specimens of which leak front and back when attached to a regular garden hose. The Orbit will leak at the hose connection, and fie on your damn washers! And it also will leak up near the male connection where you attach it to the spigot. To keep from saturating the foundation of the house, I have to set a large pot under the spigot to collect the leaked water, which then gets dumped on the potted plants.

With the new allegedly flimsy hose, there’s no leaking at all!

WTF? The timer didn’t even leak after it shut the water off…which is normally when it turns into Niagara Falls.

The thing is quite lightweight, and yes, I can imagine that any manhandling whatsoever could cause it to spring a leak. It appears to be made of cloth over some sort of light plastic interior hose. If you jerked it around or ran it over the edge of a brick patio, it no doubt would easily tear or split. But…if we think of it as a girlie hose, I suspect it could be OK, at least for a season, given careful enough handling. 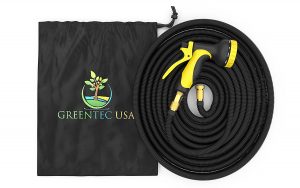 Back at Amazon, I found something in the same genre, although it’s not identical. This one looks like it’s made of the stuff used for pool hoses, though it apparently coils up more compactly. Some reviewers say it leaks, but most rave about its glories. As we noted in comments yesterday, too many of the reviews at Amazon are not-so-secretly paid reviews. But probably not all of 174 reviews are fake. I hope.

Decided to try it, just to see. Meanwhile, I think I’ll take a chance on another of these Goodyear hoses from the Depot, since the Amazon hose looks like it would be better suited for the front courtyard and I need another 50-foot number for the west side. In fact, I may drive back up there this very afternoon.

The new BBQ cover arrived from Amazon by overnight delivery. And interestingly, you’ve heard Amazon says it’s testing its abandonment of FedEx in California? Well, it’s doing the same here. This is the third package of late that’s been delivered by some guy obviously driving his own car. So…there’s another side gig for those of us rendered unemployable by Republican recessions and automation… 😮

The cover doesn’t fit as well as the Weber brand cover — not tailored to fit (as it were) and it has no Velcro straps to secure it. But I never used the straps anyway. And this thing does the job: it does cover the grill and will protect it from rain. I may glue on some Velcro strips or patches to keep it from blowing off in a high wind…but whatever. The price is definitely SO much righter than the one with the Weber brand slapped on it.