Had a 1 p.m. appointment with the skin doc yesterday, to get another sun-induced precancerous lesion removed. Normally I drive 9 miles north on the I-17 to the Loop 101, which will carry me 21.3 miles west and south to Indian School Road. From there it’s only a couple miles to the doctor’s office. (Think of that: 30 miles to find a decent doctor’s office! In the fifth-largest city in the nation!)

Well, stupidly when I go to turn off the surface street onto the 17, I go south instead of north (focusing what remains of my mind on getting to Indian School, eh?) Rather than get off the freeway a mile or two down the road, turn around, and drive back up to the 101, I decide to just drive down to Indian School and then proceed west the 10 miles across the surface street to 103rd Avenue. Said route is shorter, but more hectic.

Surprisingly, this works exceptionally well! Everyone else is on the freeways wrestling with gawdawful traffic, and Indian School, now an eight-lane thoroughfare, is basically empty. I fly low through the westside blight and, to my astonishment, arrive at the doctor’s office a half-hour early. It’s only taken about 30 minutes, in spite of driving almost half the way on a surface street. This is a drive that can easily absorb almost an hour. On the effing freeways.

Huh. That was innaresting. So when I get out, I decide that instead of taking on the nasty freeway, I’ll drive all the way across the city on Indian School to Conduit of Blight Boulevard, and thence northward to the ’hood. Unless I get in a wreck, it’s unlikely the Venza will crap out in the (dangerous!) slums this route traverses. And anyway, being stuck in among lovely Maryvale’s title loan companies, marijuana dispensaries, warehouses, and corroding trailer parks surely would be no worse than being stuck by the side of the Interstate.

So I start driving driving driving, and once again I literally fly across the city. Hit every light green, and only one or two morons get in front of me or threaten to side-swipe me.

Now I arrive at Conduit of Blight.

SDXB and I used to live right down the road from this intersection. He, I, his mother, and his daughter & grand-daughter occupied four dwellings in a pretty, retro (read “agèd”) garden apartment complex that had been condominiumized. It actually was a very pleasant place to live, with irrigated lawns and huge, mature shade trees. Right behind it, to the east, stood a 1950s middle-class neighborhood that was in the process of gentrifying — it was sandwiched between our complex and the Phoenix College campus, and being just north of the VERY hot Encanto district was a target of the young and the upwardly mobile.

When I started to think about buying a house, I looked at a place in that neighborhood. It was very charming, and I almost bought it. SDXB talked me out of it, because it had an enclosed addition, and they’d kind of jury-rigged the air-conditioning ductwork into it. He thought the system would not cool or heat it efficiently, the power bills would be astronomical, and the room would never be especially usable.

Well. HOLY mackerel, did that man save my petootie!

I get to Conduit of Blight and start to drive north…and that whole area is a freakin’ slum! My god, what a wreck. The bank branch where Tootsie (his mom) used to do business: gone. The Greek/Italian restaurant where the local cops would hang out when they were off-duty: closed, and replaced by some bizarre…shady-looking…something. Stores where we used to shop: replaced with schlock, or empty and boarded up. Formerly solid middle-class to lower-middle-class housing: rotting away.

When I call this road “Conduit of Blight” on Funny about Money, I ain’t kiddin’.

Drivin’ drivin’ drivin’… Arrive at the intersection where you turn east to get into the Costco parking lot. That area, which houses low-rise office buildings (three or four stories): blighted. No wonder Costco plans to close that store when the lease runs out! The office building where my son’s pediatrician used to practice: taken over by some kind of low-end social service thing, billing itself as a “school” but clearly…ghetto.

Not until you get almost to the southern border of the ’Hood do you start to pass beyond clear and present blight, and even then the apartments on the west side of Conduit of Blight are…well…shall we say, “low-end.” They’re Section 8 housing, a vast tract of alarming seediness.

SDXB may have been right to have moved to Sun City when he did. Amazingly enough, that was 16 years ago(!!!). I moved further into the ’hood at the same time he moved out to Sun City, getting myself as far from the obnoxious light-rail project (which runs up CofB Blvd, carrying the blight with it along with the drug addicts) as it was possible to move and still be in the marginally affordable part of the neighborhood. If you call $350,000 houses affordable…

I guess they do, nowadays.

Which brings us back to the now-perennial question: Much as I love my house and love my neighbors and like living in a centrally located district, how wise is it to stay here into my dotage? In just another five years or so, moving house will be so difficult for me (given my age) that it may be impossible. And if this area goes to blight…one would not want to have to live in anything like the sh!t I drove through to get up here from mid-town.

The ’Hood has much in common with the historic Encanto District, which gentrified in our generation and which has remained gentrified — our house, for which we paid $33,000, recently sold for a million bucks. It’s a VERY hot area, because it’s centrally located (how do I hate driving on the homicidal streets of Phoenix? Imagine having to make a 30-mile commute to work through that stuff every goddamn day of your life! And back home: 60 miles a day!!) and because local people think older construction is better built than the new stick-and-styrofoam ticky-tacky. Lots are larger — my lot is about a quarter of an acre — and structures are built of block. Not necessarily a good thing, but people imagine it is. Which is what matters, I guess. And they think these 1950s, ’60s, and ’70s houses are — ohhhh! — “mid-century modern!”

Well, we thought those old 1920s, ’30s, and ’40s houses were quaint as could be, too…so it seems to me that what we have here in the ’Hood is exactly the same thing. Encanto was surrounded by blight. The fanciest section — Palmcroft — was bordered by slum on the West, and the rest of the district had tired, run-down tracts to the south and east, with commercial stuff to the north. Not bad commercial stuff, but still…

You couldn’t put your child in the public schools there, because middle-class kids by and large don’t know how to use a knife or a club. One of our neighbors tried it and found their son, at the end of first grade, unable to read at all — the teacher had been reading their little kiddie books aloud in class and sending the kids to “read” them to their parents as homework…and this kid had simply memorized the teacher’s performance! One day they realized he couldn’t read street signs and billboards, and so asked him to read some other kiddie book. That’s when they discovered he couldn’t parse out a word! 😀

Same is true here: you’d be batsh!t crazy to put your kid in the public school that serves this area. Now, however, the city has capitulated and allows people to send their kids to any public school they choose, and so that gives young parents the option to live in a centrally located area without having to earn a king’s ransom to put the kids in private school.

If the ’Hood stays Encantoized — that is, if the present wave of gentrification sticks — it should be safe enough to stay in my home up to the end. But if it doesn’t? Holy sh!t. Moving out of here 10, 15, or 20 years from now — even if it’s possible for me to do so at all — would be quite a challenge.

So I agonize: whether to stay here, where I like it, or whether to get out now while I still can. We’re pushing the point where “still can” will no longer be operative.

Well, speaking of agonizing, gotta get up and work on the yard. And so, away! 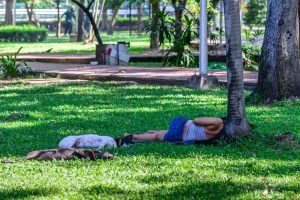