Over at Planting Our Pennies, there’s a nice discussion about the many tergiversations of budgeting, kicked off by an acquaintance’s remark that the best way to budget is to put cash in envelopes by category, and quit spending on a given category when the envelope runs dry.

Like me, the POPs rarely carry cash and instead use a rewards credit card (paid off at the end of each month) as a budgeting device. They like the way this allows you to track where every penny goes, in excruciating detail.

As long-term readers at FaM know, that’s been my strategy, too. But I have to say, it’s gotten to be a time-consuming pain in the tuchus. Hanging onto 87 berjillion pieces of paper and then, once every week or two, entering them in Quickbooks or a spreadsheet, is a gawdawful nuisance. No two receipts seem to have the date printed in the same place, and then outfits like Safeway that proudly add up every on-sale item so they can crow about how much you’ve “saved” by spending money at their place drive you NUTS, because you have to study their receipts to find the figure that tells what you did spend.

I’ve begun to wonder what is the point of knowing precisely where every penny goes…does that degree of detail really provide any useful enlightenment? Is said enlightenment worth the time required to juggle receipts and allocate every transaction to its proper spreadsheet column?

At the start of this month’s credit-card billing cycle, it was time to quit chasing flyaway receipts. And also to quit itemizing every expenditure and keeping track of how much is left in each and every ditzy little category. WGAS, anyway? All that matters is that there’s enough left in the discretionary spending budget to cover the month.

So. To get the wads-of-receipts nuisance under control, I’ve been carrying a checkbook register around and scribbling down each transaction as it’s made. This way, I never have to  look at the receipt again: just drop it in the current month’s receipts folder, so that after a given charge statement comes in and is reconciled, the receipts can be neatly stacked and stapled to the statement for the accountant’s future reference. That rudimentary organization, by the way, makes it easier to find a receipt if it’s needed some time in the future—instead of rifling through disorderly file folders or boxes full of receipts, simply scan statements until you find the transaction, and you’ll know the receipt is attached to that statement. 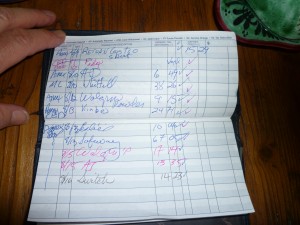 This new strategy has hugely sped the bookkeeping task! It’s now easy to see each transaction’s date and easy to see which credit card was used. The credit card is identified in the first column and the date appears in the second. I’m keeping track of three cards—the corporate card, a personal MasterCard, and a personal American Express card–in one book. To enter this month’s transactions in Quickbooks couldn’t have taken more than ten minutes.

Putting them in the new, simplified discretionary budget tracker took even less time. Instead of subtracting each transaction from a figure at the top of a separate column for each discretionary spending category (clothing, for example, or food, gasoline, personal entertainment, etc.), I’m entering one figure: the $1100 max budgeted to discretionary spending. All expenditures are subtracted from that, so at any given time I know how much is left. Separating out these hundreds and thousands of items, month after month, is just. not. worth. the. effort.

In the new regime, then, the budget tracker looks like this: 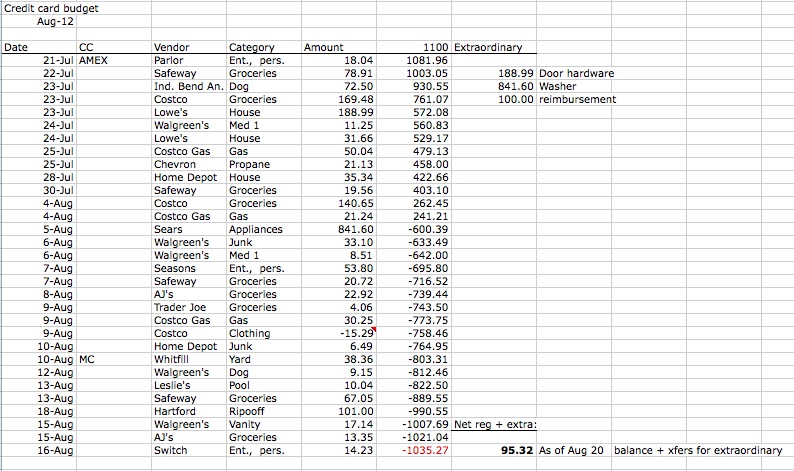 The panic-inducing bottom line is an illusion, because I’ve included among the charges two items intended to be paid not out of monthly cash flow but out of savings for extraordinary expenditures: the washer that I had to buy and the new interior door hardware that I chose to buy, which add up to about $1,000. Then my son reimbursed me $100 for a jacking-around The Hartford Insurance delivered when they raised the insurance on the downtown house because I changed the policies on my house and car to Safeco. Taken together, those three items “reimburse” the budget to the tune of over $1100. Figuring that into the bottom line, we see that at the end of the billing cycle, the budget was $95.32 in the black. Yay!

Should I ever feel impelled to scrutinize exactly how much I spent on a given category, it’s easy enough to create a little “report” in Excel with the “Sort” function. 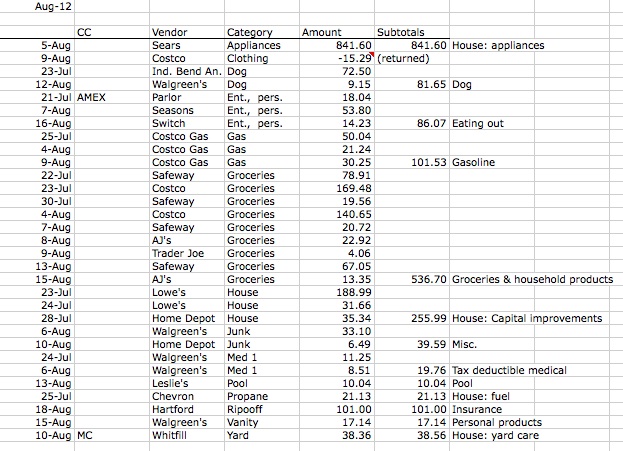 Hmm… I got a little carried away with eating out (“entertainment, personal”), but it doesn’t seem to have busted the budget. In fact, I didn’t spend that much. Because I don’t carry cash, I charged the whole tab on AMEX and my friends reimbursed me in cash, which I then diddled away at the grocery store and waypoints.

As usual, I have NO idea what I spent that cash on. Cash flows through my fingers like water. This afternoon I used some of it to buy some yogurt at Trader Joe’s. But the rest of it…????

This is much easier than trying to categorize every little charge as it’s entered. And paradoxically, adding a manual stage—write charges down as they happen—certainly is easier and less ditzily annoying than shuffling dozens of pieces of fly-away paper.

Each, as PoP suggests, to his or her budgetary own. 😀

Click on the images for a higher-definition view. Why has WordPress suddenly decided to put low-def images in every upload? Gr!