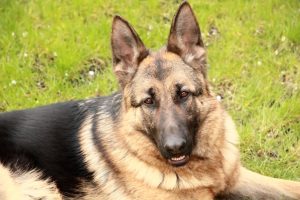 We’d acquired Greta the German Shepherd from some neighbors who divorced. I don’t know how old she was, but I think she was around four, maybe even five years old at the time. She was fully grown, settled into calm maturity when we acquired her.

A few years later my son was born. Then a few years after that, we moved uptown to a new old house in a new old neighborhood. Greta came with us. By then we’d gone through two other German shepherds and a Labrador retriever. If Greta was three when we got her, she was eight when we moved to North Central.

Another three years or so went by.

Greta liked to take the sun in the back yard, loafing outside the big Arcadia doors that opened off the living room.

This one late morning I happened to look out there and saw her laying there in a puddle of her own urine.

I had been told, back in the day, that when an elderly dog became incontinent, that was the end of its life: the time had come to put the dog down.

Steeling myself, I called the vet, put her in the car, and drove her down there.

This vet was a friend of mine. But he wasn’t around when we got down to his office. The receptionist told me to take a seat in the waiting area, which I did.

Greta was actually OK. She was just kind of doddering around, looking a little puzzled.

Across the room was a man and his…whatever the f*ck she was…girlfriend, abused wife, concubine, WTF. He had a nondescript dog with him, large and pit-bullish.

Greta is just standing there. She’s not doing anything to anyone.

The guy suddenly growls at me, “Keep that dog away from me. If you don’t, I will let my dog go and it will kill your animal.”

I was so stunned by this attack I didn’t know what to say.

He repeated his threat, into my silence. And then he repeated it again.

I got up, handed Greta over to the receptionist, and left.

First, why did I not tell the receptionist (who had walked out of the room when this happened) that this guy was threatening me and she should either tell him to leave or call the police?

Why did I not turn to his miserable little woman and say, “Hey, sister: pay attention. A man who will mistreat another woman and some aging dog will do the same to you. Get away, bitch, while you can!”

Why did I not say to the little bastard, “Make my day!”

Why did I leave my beloved dog there?

Why did I not ask, “Is there something that can be done about her incontinence? Can we fix this, even if just for a little while?”

Well. In those days I didn’t have my day made by confrontation. Today I’d take that sh!thead on, even if I had to do it with my bare hands. Today I’d have a cell phone, and I would call the police and say some rabid guy was threatening to sic his dog on me and I needed a cop there right away. Today at the very least I would have started shouting at the top of my lungs for Jerry, my veterinary friend.

In those days, I’d never heard of a UTI. And even if I had heard of it, there may not have been the antibiotic treatments we have now.

In those days, I’d been told, more than once, that when an agèd dog loses control of its bladder or bowels, the kindest thing is to put it down.

In those days, a woman stayed quiet, lady-like.

In those days, I never would even have thought of standing up to a male.

Every now and again, this vignette comes back to me — like now — and reduces me to tears.