Well: for starters, she does not have parvo.

As for today’s veterinary adventure: the folks at East Maryland Animal Hospital are awe$ome!

Learned about this group from La Maya, who used to take her pipsqueak dogs there. I’ve felt that like all vets, they push their services a little too goddam hard. BUT: I used to take Anna the Gershep there, and they were good with her. Radically expensive, but in those days it didn’t matter because I had…you remember…a JOB.

I stopped using them because they really are too expensive for a retiree’s pocketbook. Yesterday’s adventure, which resulted in several tests and a bottle of antibiotics, set me back $400.

Feeling desperate for a someplace anyplace to take my poor miserable little corgi, yesterday morning I called this outfit. To my amazement, they arranged for me to bring her in THAT AFTERNOON and, not only that, they let me go in, too!!! No eight-hour waits in the parking lot — can you believe?

The vet, one Dr. Marten, was SO nice!! She said she doubted the dog had parvo, but if I wanted they could run a test that only takes a few minutes. Given the presence of Rattie here at the domain — and given the proclivity of Rattie’s kin for carrying all sorts of diseases among which is numbered parvovirus — I said that would be good.

They ran a couple of other tests more specific to varieties of canine enteritis, including the alarming HGE. All of them came back negative. They trimmed the long hair-fringe around Ruby’s acid-singed butthole and applied some soothing salve. Injected some fluids to fight dehydration. Prescribed a medication that the vet thought would beat back the gastric infection that most likely is making the little dog so sick. And gave me a bagful of Hill’s fancy belly-soothing canned dog food.

Little dog is crapped out on the bed just now. What exactly started this episode escapes me, since she was never fed anything out of the ordinary. Hope she’ll be OK. 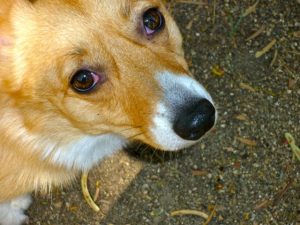 Come Saturday: something is wrong with Ruby the Corgi. She’s emitting ruby-colored liquid poop. Literally: cranberry-colored collywobbles. And barfing blood, too, so it appeared last night.

This, of course, starts after dark.

My son’s emergency vet said they were closing. I found another emergency vet halfway across the city. My son came with me. When we got there, we were informed we would have a two- to three-hour wait, and we had to stay in the car.

Not so much, said I.

We drove to Alta Vista, a venerable old veterinary where I used to take my dogs and cats, which now operates at night as an emergency veterinary. There, we found a SIX- TO EIGHT-HOUR WAIT!

Finally I just said no, we are not waiting eight hours with a sick dog in the car. If she’s going to die, she’ll be better off dying at home.

Sooo… That was just gawdawful.

Come Sunday morning, Dog still has red diarrhea. Apparently this is not as bizarre a manifestation as it sounds, and in fact may not be life-threatening. It looks like if I can just get her into a vet, there’s a med that can treat it. She seems not to be as sick as she was Saturday night, so I have some hope that she may throw this off. A similar rumination appeared at another website.

She survives Sunday night, anyhow. Come Monday, the instant 9 a.m. rolls around I’m on the phone listening to the honored Dr. Bracken’s INTERMINABLE advertising blurbs on the hold button. This guy is the best vet in the city, and has been for decades.

Finally, finally, finally I get an appointment at 2:30 in the afternoon. Meanwhile, wouldn’t you know, I’ve got a dermatologist’s appt at 11 a.m. Or something: can’t read my handwriting. Call and cancel that, since it’s an hour’s drive in each direction, which I would like not to add to the 30-minute trudge (one-way) to Bracken’s office.

This, I figure, will mean another quarrel over the food I give her, which is the same as commercial dog food only without the artificial fillers and crap. AND it’s not made in China. She’s thriving, just like three other dogs thrived into old age on the stuff, and I do not appreciate the high-pressure pitch to buy the canned goop & kibble the vets sell in their lobbies. I guess I could just go yessir yessir, buy a can of the stuff, and donate it to the Humane Society. That would be easier than trying to defend myself, I guess.

Like everything to do with pets in America, veterinary practice has become a vast, predatory business. Individual practices are being gobbled up by huge, national conglomerates that do, really, predate on customers. They try to high-pressure you into all sorts of unnecessary products and treatments, to the point where, if you’re paying attention, you sense that about nine times out of ten you can’t trust what they’re telling you. Bracken so far is still an ethical, independent practitioner, though I know he’s reaching retirement age and I do think he may already have sold his practice to one of those operators. The give-away is that godDAMNED series of blatting sales pitches and scare stories on the hold button: those are characteristic of the conglomerates. An independent vet doesn’t subject his customers to that. Nor, I suspect, can he afford that kind of answering system.

Monday passes, and, amazingly, Ruby gets better. Never do make it to the vet. I withhold food but put down plenty of water. She guzzles water and then guzzles some more. And by noon she has completely stopped barfing AND firehosing out the rear end. The day proceeds, and she remains stable.

I give her a few bites of boiled chicken mixed in with some cooked rice. Nothing happens.

It looks like she had some kind of enteritis and was able to throw it off. What would cause that, I do not know, though I suspect a bird (or a human) could have dropped something mildly toxic into the yard. Thank god it wasn’t rat poison.

We have this baleful admonition from one of the first and biggest chain veterinaries going on about how urgent it is to get the dog treated. “These diseases can range from mild and self-correcting to severe and rapidly fatal.“  Looks like we’ve got “self-correcting” here. “Mild” is not a term I’d use, though. Banfield, I don’t trust, speaking of corporate massively profit-making veterinary boondoggles. Of course it’s in their interest to scare the ess-aitch-ai out of you.

Hmmm… In the “larn somethin’ every day” department, now I come across this: hemorrhagic gastroenteritis. HGE, for short. Interesting…something I hadn’t heard of. Didn’t know there WAS anything left in that category! 😀 Merck Manual seems to indicate that blood tests are needed to diagnose this alarming and mysterious ailment, because a bunch of other ailments produce similar symptoms. Evidently the main treatment is “prompt” administration of IV fluids.

Right. After a six- to eight-hour wait in your car…

Parenteral antibiotics effective against Clostridium spp (eg, ampicillin 22 mg/kg, IV, three times daily, or metronidazole 7.5 mg/kg, IV, twice daily) may be considered, but it is uncertain if this is needed in all cases.

In a prospective study of dogs with AHDS and no clinical indices of sepsis, treatment with amoxicillin-clavulanic acid did not affect mortality rate, duration of hospitalization, or severity of clinical signs. This might suggest not all cases of AHDS are due to primary bacterial infection or that the bacteria involved may not be susceptible to amoxicillin-clavulanic acid.

As of Tuesday morning, no sign yet that she’s about to croak over, though. The diarrhea has stopped. She trotted outside as usual to pee, then trotted back in the house begging to be rewarded with a treat for accomplishing this human-bedazzling treat. I gave her a tiny piece of the boiled chicken. Now she’s back on the bed and snoozing again, waiting for the human to quit poking at the glowing box it likes to balance on its lap.

If this is what she had (has??), then it’s spectacularly lucky she threw it off…if she did. We’ll see…apparently this thing can come back on them some 10% to 15% of the time. And evidently it can carry them off, pretty damn fast.

Meanwhile, sez the same source, the signs of this ailment are so similar to parvo that it takes a blood test to differentiate them.

But she has had the parvo vaccine…hmmm… We’re told dogs of any age can get it and the vaccine doesn’t necessarily work 100%. It sez here…

According to Los Angeles veterinarian Wendy C. Brooks, DVM, “Every day that goes by allows the [infected] dog to produce more antibodies, which bind with and inactivate the virus. Survival becomes a race between the damaged immune system, which is trying to recover and respond, and potentially fatal fluid loss and bacterial invasion.”

This, from Whole Dog Journal. Though that august publication is given to holistic approaches — and of course, it’s journalism, not the higher reaches of science — it is a useful and apparently fact-checked rag. Over some years of sporadic reading, I have yet to find anything truly wrong in it. Quoting Dr. Jean Dodds, DVM, an expert in veterinary hematology and immunology:

…sometimes, the parvovirus vaccine fails to work as intended.

First, she made clear, no vaccine produces 100 percent protection 100 percent of the time. “Vaccination is not a sure thing,” she explained. “It certainly improves the odds that an animal will be protected from disease, but it does not guarantee this. There is no way, even with the best vaccines, to be sure that any given individual’s immune system will respond in the desired way to protect that animal.”

Not all dogs have perfectly functioning immune responses, and, similarly, not all vaccines function perfectly, either. “There will always be an occasional case of a ‘vaccine break,’ which is what we call it when a vaccine fails to protect an individual against an infectious disease challenge,” said Dodds. “However, when a break occurs, if the animal has been appropriately vaccinated, it will usually experience only a mild form of the disease.” Dr. Dodds speculated that this is the most probable explanation for what happened with the infected puppy mentioned above.

Not seeing any reports of a parvo contagion in the county this fall. However, in October an outbreak occurred in Washington State…and of course, this being Christmastime, half the ‘Hood has relatives down here visiting in their RVs. It’s been quite a while since Ruby had that shot.

I’ll call Dr. Bracken’s office again this morning and see what they say about it. I have a feeling that discretion may be the better part of valor, though: the less disturbance the better at this point.

This morning she hasn’t had a BM — which means she’s not showing any diarrhea…yet. She hasn’t barfed since Sunday: this is Tuesday. Just now she demanded to be fed…but then, she’s a corgi. Corgis can eat under the direst circumstances: they do not lose their appetite. Ever. Just gave her a tiny serving of boiled chicken and rice. We shall see if it stays down.

Godlmighty. Do you suppose this Spate from Hell is ever going to come to an end???