So… I’m in the Costco thinking about replacing my houseful of phones, the current system evincing signs of advanced age. All the batteries are running down, so every time I turn around I pick up another dead handset. And lo! There on the shelf at the Costco is this elegant Panasonic model. It’s an elaborate lash-up, very much like mine only updated for the 21st century. Not only does it include 87 gerjillion (well…four) wireless handsets plus the required answering machine, this thing includes a call-blocking feature similar to the much-missed CPR Call Blocker.

I threw my CPR Call Blocker out after Cox barged in and forced its customers to switch to VoIP, having been told it wouldn’t work with Cox’s accursed modem. Cox, however, now offers NoMoRobo, supposedly the be-all and end-all for nuisance call blocking.

Not so much. The CPR Call Blocker 5000 cut the nuisance calls to at most one or two a day, but more typically to none.

NoMoRobo? Holy sh!t, what a nuisance! It takes the robocall nuisance and multiplies the aggravation by a factor of about 10. It does not block robocalls, because the robocallers automatically generate thousands, hundreds of thousands, and ultimately (one presumes) millions of fake phone numbers. They target your area code and phone exchange, or one close to where you live, so that incoming calls appear to be coming from someone in your neighborhood. The kids’ school, perhaps. Your neighbor across the street. Your pharmacy, telling you a prescription is ready. WhatEVER. Pick up the phone, and you get a scam.

The deal here with NoMoRobo is that it can not be programmed to block all calls in a given area code. None of my friends, acquaintances, or business contacts have the same exchange as mine. This means that any call incoming from this exchange is, by definition, a scam and nothing but a scam.

I get between six and twelve such calls every day, starting around seven in the morning and running through till nine at night.

To block spam calls, you have to go to NoMoRobo’s website, type in the offending phone number, describe the circumstances, and send the squib. This turns an ordinary nuisance into a time-consuming nuisance. And it’s pointless: the scammers don’t care that you blocked thus-and-such a combination of figures…their machines are constantly generating new combinations.

Even when NoMoRobo blocks a number, it lets the first ring jangle you up! So…yeah. That’s real helfpul, isn’t it? When you’re trying to focus on something — or hell, trying to take a nap! — the god damned phone jerks you away from what you’re doing, even if it’s a blocked call!

Most of the calls, however, are not blocked, because the spoofers generate many, many more calling numbers than NoMoRobo can catch.

At one point, I suggested to their alleged customer service that they should allow users to block entire area codes. They said ohhh no! That can’t be done!

Well, it sure as hell can be done, because the CPR Call Blocker does exactly that. It can be programmed to block calls from whole countries, to say nothing of local exchanges.  So either NoMoRobo’s developers don’t want to be bothered with making their system do that, or their customer service people are not altogether forthcoming.

At any rate, when I saw this fancy Panasonic wonder-phone, I thought hot dang! Kill two birds with one stone: replace the aging Uniden phones and get a built-in call blocker!

So I grab it off the shelf.

Having become ever-so-much-more wary over time, though, before opening the box and setting up this complicated marvel, I looked up the user reviews on Amazon. And then on Costco’s website.

A lot of people on both sites complained of poor sound quality. This seems to be a nigh unto universal issue. Also roundly hated: poor customer service and incomprehensible instructions. Ten percent of Amazon reviewers pan it with one (!) star. Interestingly, the rate is about the same over at the Costco site.

At Amazon, I figure when one-star ratings add up to more than 9%, that ain’t a happy sign.

For 8 bucks, I could buy four rechargeable phone batteries supposedly approved by Uniden. So I ordered up eight of the things, for a total of about $18 including tax…a far cry from $108 for a complicated phone system that may or may not work.

So I decided to replace the batteries in the existing handsets and hope for the best. If that doesn’t work, Uniden sells the handsets alone: it’s still cheaper to replace a few of those than to buy a whole new Panasonic system.

Apparently, if I’d just waited until the steam stopped shooting out of my ears after the Cox fiasco, I could in fact have attached my old CPR Call Blocker to Cox’s accursed modem. But I can’t find the thing now, so I guess I must have tossed it in a rage. That would be pretty typical.

It’ll cost another hundred bucks to get a new one. But at this point I’m thinking…let’s see if these new batteries hold a charge. If they do, fine: invest in a new CPR 5000, call their excellent customer service on the phone, and get them to coach me through connecting it to Cox’s accursed modem. Et voilà! Say good-bye to the NoMoRobo joke.

Schlepped the unopened Panasonic back to Costco this morning; received a fistful of money back on the card.

Now I’m going to think about this for a few days and, if I can confirm that the CPR 5000 will work, with the hated new Cox equipment, then I’ll just bite the bullet and buy another one. I know their customer service will coach me through connecting the thing to the complicated junk Cox cluttered my desk with — at least, I think they will. They post a phone number at Amazon, which I’ll call tomorrow to see if they’ll agree to do so.

Well, frankly, I think the only alternative is to disconnect the land line. Replace it with an iPhone for actual calling and texting, and several charged-up but un-connected cheap clamshells for dialing 911 in a pinch. 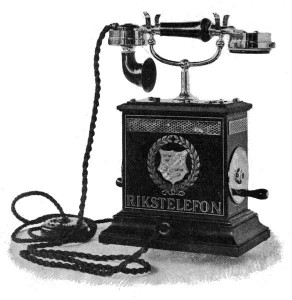 So I sent the Cox tech away while I thought about the options presented by the coming exit from copper land lines on the part of Our Honored Communications Provider. It seemed to me that what the guy proposed to do was not one helluva lot different from switching the land line to VoIP. Big difference: Ooma, a prominent VoIP provider, costs about five bucks a month. Cox, having purchased a few Arizona corporation commissioners, soaks its customers for $35.

Find a guy who will babysit me through connecting VoIP, a chore that I do not feel technologically competent enough to engage. So, it’s off to the Ooma website to order up the device needed to connect through their…network, platform, or whatever it is.

Since last I reviewed this service, Ooma has added a lot of new features. In the process, they’ve added to their website. One of the additions is a certain brain-banging opacity. Nowhere, far as I could tell, can you find a page that says “Buy this, Get this, Pay this per month.” They babble on about a “smart phone for your home” (I don’t want a smart phone, dammit! I can’t figure out how to use those things), but it’s unclear whether you have to buy their phone sets to connect through their service, or whether your existing handsets will work.

Call a sales rep and get…what? Yes: a person who simply has no fuckin’ clue! No joke. So small is the clue this chickadee has that she cannot even understand the question I’m asking!

Yes. So alien is the concept that a person might have actual phones in different rooms in her house that she is incapable of grasping that I’m not talking about cell phones.

I think…fukkit. These are hoops I am just flat not gonna jump through. At least when I call Cox, I get a human being right away, and that human being usually has at least a FEW measurable IQ points between the ears. That, I suppose, is worth $35 a month.

So now I have another Cox dude slated to come over next week and convert the damn phone system.

Do I WANT this conversion? Shit, no. My feeling is, if it ain’t broke, don’t fix it. You know and I know this is going to create some kind of PITA, driving up the blood pressure, creating vast inconvenience, and eventually eliciting yet another hummingbird-like rage.

In a few days, we will have telephones that go down every time the electricity is out (that will be once or twice a year), every time Cox’s cables are down (that will be every goddamn time a drop of rain falls and every time the City digs up the roads, an ongoing endeavor whose sole purpose apparently is to keep their employees busy), every time the WiFi modem disconnects itself (not so frequent as before, but still unpredictably often), and…hey! EVERY TIME I NEED A PHONE URGENTLY.