That’s pace, as in the Latin word for peace. Lordie, can those platforms be NUISANCEY!

The constant tide of “notifications” from Facebook and Twitter has taken to filling up my email inbox. Derailing these junk messages (“Olivia Boxankle commented on your comment to her comment!” “Wish Julia Neverheardofher a happy birthday!”) has turned into a BIG, time-consuming job.

Apple’s mail program has an inscrutably complicated method (if “method” it is) of dealing with nuisance mail. Instead of consigning suspect messages and messages from senders you’ve already flagged to one junk mail folder, it has a “Junk” folder and also a “Trash” folder. Exactly why some incoming goes to “Junk” while others go to “Trash” is opaque, and as far as I can tell, there’s no consistent way to clue MacMail as to where you want which flak messages to go. You can tag certain senders or subject matter as junk or trash, but the result isn’t reliable: it doesn’t always work the way you think it’s going to.

The result is that every few days, you get hundreds of messages consigned more or less randomly to these two folders.

And, just like Gmail and Outlook, MacMail often relegates legitimate messages from real, live senders — friends and clients and vendors — to “Junk.”

This means messages that you need or want to see often get submerged in the tsunami of incoming debris. And that means you have to scroll tediously through scores and scores of meaningless emails — in not one but two mailboxes — trying to catch one or two messages that matter.

Every few days I shovel out these mailboxes, confronting something over 200 messages in one and something over 100 in the other — not counting the ones that get through to the legitimate inbox. That’s THREE TO FOUR HUNDRED messages to have to review!

You wanna talk about time sucks?

Sick and tired of combing through this monumental nuisance, I realized that about 98% of the debris comes from Facebook or Twitter in the form of “notifications” flagging incoming comments or messages.

I use Facebook and Twitter primarily to publicize my blogs and try to peddle my books. Some years ago, a very clever Web guru — since retired — set up Facebook so that posts at Funny about Money (which was monetized at the time) would automatically post to Facebook. FB figured this out and brought a stop to it, so you can no longer do that — you have to jump through a series of third-party hoops, a process that’s rather too ditzily techie and annoying for me to be bothered with. So these days I manually link to FaM at Facebook.

Physically going there for that purpose leads me to browse through friends’ and enemies’ posts — amusing enough, but still: a time suck of the first water.

The appeal of Twitter escapes me. I cannot think of anything more boring or stupid than Twaddle posts. So it wastes less of my time…but still, it does take time to go there, post a link, find and post an image, and dream up a “tweet” to try to lure readers over…probably fruitlessly, if they find the platform as meaningful as I do.

It’s pretty easy to turn off “notifications” from Facebook and from Twitter. In both cases, it involves hoop-jumps. And in neither case is the “off” function 100% effective. But it cuts off most of the flow of electronic chatter the two platforms dump into your in-box. Facebook’s “off” function seems to be a little more effective than Twitter’s — I’m still getting some trash from Twaddle, but effectively none from FB.

So. At this point I’ve made myself kind of semi-demi-off those two platforms. To some degree, I’ll be able to view friends’ posts and comments at my convenience, not at some machine’s.

And one aspect of the intrusive dystopia we occupy these days is rendered partially under control. 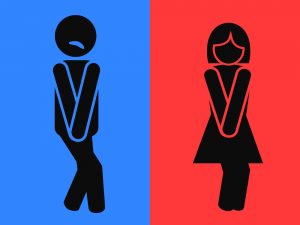 Trigger warning: politically incorrect speech ahead! 😀 May be unsuitable for children and the namby-pamby.

Check this out! Facebook has banned me and locked me out of its precincts for the sin of saying that public women’s bathrooms are often dirty because women are no tidier than men.

Got that? Apparently if you don’t think girls are better than boys, you’re not fit for polite society.

My friend Connie the Long-Haul Trucker was going on at Facebook about the prevalence of unisex bathrooms at truck stops. She opined that when on the road, men’s bathroom habits tend to  be execrable (uh-oh, wait…is that hate speech?), as witnessed by many truckers’ habit of defecating into a plastic bag or urinating into a soda bottle and throwing the waste out the window onto the shoulder. Unisex bathrooms, she reported, are uniformly filthy because of similar habits brought indoors.

I replied that women are slobs, too — which is the main reason I avoid using public bathrooms unless I absolutely have to — and that it’s the proprietor’s responsibility to keep the facilities clean.

Only you can see this post because it goes against our standards on hate speech.

Women are slobs, too. I’ve been in amazingly filthy women’s rooms. Problem is that the proprietors need to be required by law to keep the facilities clean.

Once you’ve been adjudged guilty of “hate speech,” there’s no appeal. Nor can I access any of my pages there: I am now officially persona non grata. As far as I can tell, there’s no way to reach a human being at Facebook, unless you can find a snailmail address (GetHuman doesn’t provide one, but a Google search for their street addresses brings up the gaggingly cutesy “1 Hacker Way” in Menlo Park).

I was going to just let it drop — despite the hit to my half-baked marketing efforts, in a way it’s a boon. Of late I’ve found myself spending way, way, WAAAYYY too much time on Facebook. The thing is kind of hypnotic. Many of my choir friends are on it, as are old friends from long long ago, who now live in other parts of the country. Really, in terms of health and constructive activity it would be a lot better — a lot better —  if I would lose Facebook.

But this whack upside the head really is pretty stupid and insulting. And I do have two marketing sites up on FB, in conjunction with one of which I joined a special interest group where I’ve been pretty active. Just disappearing isn’t going to look good.

So I may send a letter — possibly registered, even, if I feel like bestirring myself to drive to the post office — to their PR people at their snail-mail address.

Facebook is more hot air than not. The claim that you can make big bucks marketing your wares on FB leaves a lot to be desired.

At one point I hired a marketer who claimed to be expert with Facebook and guaranteed fantastic sales. Hence the Plain & Simple Press and The Copyeditor’s Desk pages. After she put these two FB pages online, we ponied up some cash and bought a Facebook Ads campaign to peddle the 30 Pounds/4 Months book.

It ran for a month or two. She was sure we would see a sharp spike an Amazon sales.

Along comes the first revenue report from Amazon.

Not only is there no upward movement, sales went dead flat after the FB Ads campaign went live!!! First they dropped off sharply. Then: nothing. Literally, not one sale.

She couldn’t believe it. Said it wasn’t possible. I think she must have thought I was trying to get out of paying her. I had to send her PDFs of the Amazon reports to persuade her to believe me.

You understand: the book wasn’t making me rich by any means, or even turning enough to buy a cup of café Americano at Starbucks. But it was selling a few copies. The result of the Facebook Ads campaign, seemingly, was to bring a stop to even that volume of sales. 😀

So…I don’t know. It’s probably not even worth the trouble to try to bring this little miscarriage of justice to the attention of a live human being at Facebook. I can do better at marketing with Pinterest — especially, come to think of it, with three book chapters going online each week. That avenue had faded from my consciousness because it’s such a PITA to prepare an image for Pinterest…though Pinterest-friendly images could do double-duty on Twaddle.

Better part of valor, I suspect, is just to let it go and get my life back.

Holy God! Take a look at what Fabulously Broke found! Do not pass go before you click here and enter your own name.

When I went there, I discovered they’ve published my street address—with a map to my house!—telephone number; approximate age; credit rating; wealth level; value of my home; gender; marital status; length of time I’ve resided in my home; socioeconomic status of my neighborhood; type of structure I occupy and and the year it was built; its alleged value; whether it has a fireplace, central heating, central air, or a pool; how many kids I have; my educational level; my hobbies; my occupation; my interests; and my zodiac sign.

To be fair, some of these are left blank. Some are wrong—hilariously, they think my house is worth in excess of a million bucks. I wish!!! Some of the data clearly came from Facebook: I recognize the disinformation I entered there.

However… Spokeo also has another me in its bowels: Some woman by the same name is still living with my former husband at my former address. Interestingly, this woman’s information happens to match my own real-life personal data.

Folks. I divorced before there was such a thing as social media. The Internet barely existed when I ran away to the Alaskan outback. So…wherever these SOBs are aggregating their data from, it’s not all coming from the Internet.

If you go to their contact link and send them an e-mail demanding that they take your personal data down, you’re forced to enter their choice of subject lines. Select “business matter” instead of “privacy” to reach a human being. Select “privacy” and instead of sending the dear-sir-you-cur you’ve scorched into their contact form, you get instructions for a hoop-jump and the advice that the only way to get your information off their site is to remove yourself from all the social media sites you use.

In other words, if you don’t want these bustards publishing your current address and phone number to your abusive ex- who threatened to cut off your head, pee down the hole, and flee with your children to East Zambia, you may not participate in any social media of any kind. Either that, or you must leave a trail of lies wherever you go.

I wonder if Spokeo’s management can spell “class action suit.”