Well, it didn’t seem funny at the time. But after a stone-cold shower and a couple hours of rest, it’s beginning to seem pretty ridiculous.

Tellya one thing, though: I will never buy another product from Home Depot again, not if there’s any way I can help it. After this, I’ll shop local and pay a few bucks extra to get a product that’s not so cheapied down as to be insulting. If push comes to shove: Lowe’s or Amazon.

Here’s the piece of junk I bought — four of them, actually, so as to cover about 120 linear feet of invitingly flammable shrubbery. 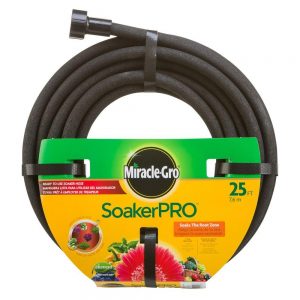 I wanted to buy a 100-foot length and a 25-foot length, or, failing that, two 50-footers and one 25 feet. But the 100-foot hose, as it turned out, was not a hose but a contraption: a kit that you had to put together with an array of cheesey plastic connectors by way of laying down a pattern to fit a garden. It had no built-in connector fittings for your garden hose — you had to DIY those along with all the other pieces of ditz.

As usual with Home Depot: back in the car, drive up to the damn store again, get my money back for the 100-foot non-hose. Replace it with four 25-foot hoses.

Notice, once home, that the new hosing is not the same gauge as the old hose I put in around the roots of the pool-side plantings. It’s considerably narrower. And considerably cheesier.

So I run these fine hoses along the top of the cat’s claw mounds, zip-tying them in place and planning to let water dribble on the plants for several hours. Theory: the underlayment will be good and soggy by the time the lads come around this evening to play with their illegal fireworks.

First thing that happened: as soon as I turned on the water, a SHOWER erupted from the connection to that soaker hose. I tried to patch it with duct tape: no dice. And the other hoses? Water would barely run through them, even with the faucet turned way higher than it should be with a soaking hose.

What a fiasco. I screwed around and dorked around and dorked around and screwed around, trying to find some way to make the junk work. Finally ended up dragging a garden hose over to the vines’ worst dry spot, climbing up on a ladder, and zip-tying a lawn sprinkler to the top of the vines. Realized one of the old soaker hoses (we do mean old: I put those in a good 10 years ago) was still viable, even though the other one, which was connected to it, disintegrated in my hands yesterday. Tried to drag that out from behind and around the stems and plants but it was just too damn hot to continue. Removed the hose-oid with the geyser and attached the other garden hose to the next hose in line.

This one at least didn’t release a spray into the stratosphere. But neither did it move much water into the soaker hose. Even with the water pressure turned way higher than you’re supposed to use with a soaker hose, it wouldn’t move water past about halfway down the next, attached hose.

Finally gave up — even jumping into the pool wasn’t cooling me off, the face was beet-red, and I was beginning to feel light-headed. Turned on the water so it would soak (I hoped) at least the vines directly across from Jerkowitz’s trash piles and retreated into the air-conditioning.

It is 112 degrees here as I write this, after 5 in the evening. I’m a tough old bat (so they say), but wrestling with that mess damn near gave me a heat stroke — at one point I considered whether I should call 911. Then remembered that ice water comes out of the refrigerator’s spigot so was able to soak a compress and chill down the head, bringing a stop to the wooziness. A cold shower finally did the complete job.

Man. What is the matter with a retailer that peddles crap like that to the public?

I will never buy ANY product from Home Depot again. If this is the kind of junk they feel free to foist on customers, I will pay a few bucks more to BUY LOCAL (!!!!!) and get a better product.

If Donald Trump somehow, by some God’s miracle, manages to do ONE good thing while he’s running a three-ring circus from the White House, it will, just maybe, be that he lays enough tariffs on shoddy imports from China and waypoints to force U.S. corporations to start making goods in the U.S. again. With the exception of automobiles, our products were not just out-and-out junk.***

Okay. The Fix-Or-Repair-Daily cars were a big exception. But most of our stuff: not guaranteed to be trash.

We need the jobs back. And we need the quality consumer goods back.