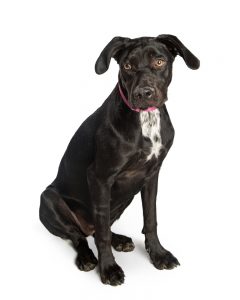 So I’m on my way over to meet my friends, to join them for a Costco junket. It’s almost 9:30 a.m. Hotter than the Hubs of Hades, cruising up Main Feeder Street EW.

And what should come trotting up the road but a beautiful young dog, all black, overheated looking. I stopped. He jumped in my car: a smallish lab mix. My guess would be part pit bull, part lab. I thought he was a pup.

He parked himself in the driver’s seat well, seated conveniently on the gas pedal and the brake pedal. And refused to budge.

Rousted one of the gay guys from the corner house. He’s kind of an old fella and pretty gimpy. Asked if he thought he could help me get the dog into a more practical place inside the car. By the time we got back to the car, the dog had climbed over to the front passenger seat well…which was good, because when the old guy saw the pooch, he said there was no way he could’ve helped to personhandle it.

Brought the hound back here so I could call the folks and put them off.

Get him into the backyard with a bowl of water, which he inhales. But once he gets back into the garage that dog is NOT goin’ back out.

I try to slip into the house around him, but Ruby dodges out.

Forthwith they get into it. Ruby, the little twit, will try to dominate any dog…even if it weighs 30 pounds more than she does. Even if it’s likely part pit bull. Which evidently it is….

Had a time rescuing her. Finally the stray shot into the house, allowing me to fish the now cowering corgi out from behind the car’s exhaust pipe.

That distraction delayed the phone call long enough that the folks were outside waiting for me to show up and didn’t get the call, so I had to drive to their place to tell them what was going on.

Catch them as they’re about to leave for my house. Explain what’s going on. They agree that leaving the dog in the house is impossible and outside in the heat is unwise.

Return to the Funny Farm, by which time I’ve decided to take the dog to the Humane Society.

I would like to steal him. Probably would, if I thought I could get away with it. Which I don’t.

Often you can find the owner on NextDoor, but I didn’t feel I could risk keeping him even for a few days, since there’s no sane way to keep them separated. Obviously, I can’t keep a dog that’s going to fight with Ruby, even for a short time

Got the dog up to the Humane Society. Yes, he had a chip, but the idiot owner hadn’t registered him! They had no way of finding out who he belonged to. And their shelter was full. They wanted me to drive him down to the county pound, WAY down in South Phoenix — half a tank of gasoline’s worth of driving. And that place is a zoo.

They ended up taking him in and saying the pound would come pick him up from their facility, within 24 hours.

Got home to find Ruby in a frenzy. She was SO upset. She ran around and around the backyard and the house baying (did you know a corgi can actually bay?) and barking at the top of her little doggy lungs.

Still felt guilty, but was forced to acknowledge that my first instinct was right: NO WAY could I keep that dog while searching for its owner…or permanently.

I thought, briefly, about seeing if M’jito like to have this dog foisted on him. But in the first place, he’s not a golden retriever (the preferred beast). In the second, he’s very active. And in the third, somebody is no doubt searching for him…or will be, whenever they get home from work.