So here’s a nice small miracle: 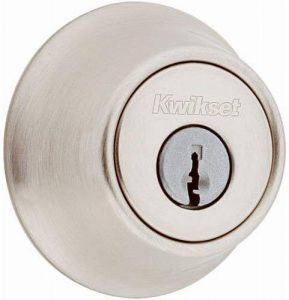 When I came in the door to the garage the other day, the deadbolt jammed and my key got stuck in the lock. After some struggle, I managed to get the key out, then go ’round to the front door to get in. This, three or four weeks after an Anderson Locksmiths guy had come over and supposedly fixed the damn thing.

So I figured it was just worn out — we installed that lock when I moved in, back in two thousand and aught four. So the thing is 16 years old…and that’s the door I pass in and out of all the time. Up to the Depot; buy a new lock. Manage to find another Kwikset just like it!!!!!

Call Anderson and tell them to come install the lock.

When they show up — two new guys, not the fella who surfaced the last time — they’re floored that I bought a new lock. They say they can fix it.

So they fiddle with the thing a bit, mess with the strike plate, have a good time chatting, and…damned if they don’t have that fine device working like a greased chicken feather! It didn’t work this well when it was new.  A-A-A-A-A-N-D because they discovered the trip was a “re-call” because the thing went back on the fritz after the first guy tried to fix it, they charged me exactly…NOTHING!!!!!!!

They suggested I take the new lock back to the Depot.

But…I’m thinkin’ maybe not. Truly, I was flabbergasted to find one that matched the rather expensive set(s) throughout the house. O’course, I had a job when I moved in here (remember those?), so I could afford to buy Kwikset’s better-than-builder-grade hardware. But how long are they likely to keep on making that line? The lock was pricey. However, if I keep it, I’ll have one on hand if the suspect lock craps out or if another one does.

There are three deadbolts in the house. Two — the ones in the kitchen — are identical. The one on the front door came as part of a fancy front-door set. It’s slightly more elaborate on the part that fits the outside of the door, but the same on the inside. I’m sure I can touch up the door’s paint if I have to replace that lock with this one. If I do stay here until I croak over, one day I may be happy to have this lock.

Awesome customer service! That’s how a small business keeps customers coming back in the door, year after year. And it’s the way a specialized hardware store beats the big boxes.

• A human being answers the phone.
• Employees treat customers as they would like to be treated themselves.
• Skilled workers really are skilled.
• People go above and beyond the call of duty.

While we were renovating the downtown house, I stumbled across an amazing windfall: in my neighborhood, a great old house on horse property was being demolished to make way for a cluster of McMansions. The guy who was pulling it down had salvaged the doors: two sets of huge solid mahogany French doors, a matching single back door, and a solid mahogany front door. I grabbed the entire lot, including all the hardware, for $300.

These magnificent pieces of workmanship now reside at the little house downtown, where they have transformed the place.

The hardware, as it develops, was all made by Baldwin, one of the most expensive lockmakers on the planet. All of it except the front door’s lockset was in perfect working order. The hardware on the front door never worked right, and the level handle on the interior flopped down like a broken paw. And, as it also develops, Baldwin locks are very hard to repair: not just any locksmith can work on them. To complicate matters further, the hardware dates back to about 1950.

A couple of months ago, the deadbolt broke. I called a locksmith whose name I lifted from Angie’s List while the Phoenix-area list was still free. He came by, looked at it, and said it was beyond his ken. He referred me to an outfit called Anderson Lock and Safe, and said if anyone could fix it, they could.

Amazingly, these folks will send a locksmith within an hour or two after you call. Even more amazingly, they have a whole crew of locksmiths who seem to know what they’re doing. Soon we had learned that the deadbolt was broken because Eric the Fly-by-Night Contractor had installed the strikeplate wrong, so the bolt was hitting metal; eventually that’s what broke the lock. As for the handle: that was a challenge. A spring on the inside had worn out, and Baldwin no longer made such a spring.

One of the men took the lockset apart and showed me the complicated interior. It was fashioned, he said, like a Swiss clock. All the interior parts were hand-milled. Today, even Baldwin uses mass-produced parts, to keep costs down. Although a Baldwin lock sells for upwards of $300, no one makes anything like the lockset we had. He estimated its value at around $400; his boss thought it was worth more like $700.

This guy repaired the deadbolt, fixed the strikeplate, and got the handle to sit horizontally, but without the spring it had to be manually placed in position. It didn’t really work: it just looked like it sorta worked.

Then along came Bila the Painter. He needed to remove the lockset so he could sand and refinish the outside of the door. He couldn’t figure out how to get it off, so I paid to have Anderson come over and remove it and then paid again to have them come back and reinstall it.

In the course of this project, the handle ended up flopped back down again. Pretty quick, Anderson sent over Bill the Locksmith. This guy, who seems to have the best time in the world playing with locks, took everything apart, did some more repair work on the thing, but said he couldn’t fix the handle without a spring.

I said, well, the other guys had said that spring is no longer being made.

True, said he, but he figured there had to be something like it somewhere. He promised to keep an eye out. He went off. M’hijito and I gave up.

So yesterday the phone rang out of the blue, and there was Bill the Locksmith! He had found a spring he thought would work in the lock. So I threw on some clean clothes and raced down to meet him at the house.

Half an hour or forty minutes later, lo! The lock worked, the handle stood cheerfully at attention, and the entire assembly operated like new!

Not only that, but he planed down part of the door frame that Eric the F-b-N Contractor had left crooked and sprinkled powdered graphite on the ill-fitting weatherstrip that Greg the Handyman installed. So, when M’hijito got home from work last night, he found a front door, deadbolt, and fancy lockset that actually work!

This is most incredibly fantastic.

I am sitting here and I am very, very pleased.  It’s probably hard for someone else to understand the degree of my pleasedness.

Yeah. Absolutely. So that’s two people who will tell all their friends to use Anderson Locksmiths. One of them will broadcast that message to the population of the world. And that’s how small businesses can fight big box chains.