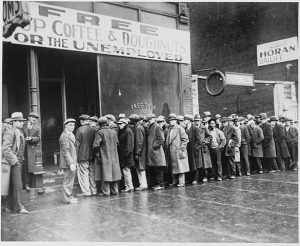 Did I tellya so or not? The biggest sell-off in history, for cripes sake. I hope you were braced.

My financial guy hasn’t had a word to say…he’s probably still dodging flying bricks down at his office. We’re pretty well diversified, but IMHO diversity ain’t much help when everything, everywhere is skateboarding toward Hell. Any of us who has any money in the market at all has lost a fair amount of our proverbial shirt.

As The Economist‘s Leo Abruzzi observed a few weeks ago, it’s time. Surely another recession is no surprise to careful observers. I will say that a vast, brain-banging market crash is a bit jolting…but with the regime that we have in charge of the country, I suppose it’s not surprising, either.

We have 3½ years before we can clean out the White House. Even if Trump is impeached — one would not like to see  harm to happen to another human being, but one would welcome a successful move to evict the man — we would still end up with Pence and Ryan. Unlike the present incumbent, Mr. Pence is not a freaking fool. And that makes him far more dangerous than the Orange Buffoon. Ryan is smarter than Trump, but he also is a bat-sh!t extremist who would like to drag this country back into the 1950s, socially and culturally if not militarily and economically.

He and Pence are peas in a pod that way

You could reasonably argue that America has not faced such great existential danger since the start of the Civil War.

Even if we manage to clean some of the crazies out of Congress in the 2018 mid-terms, it will not change the fact that our leadership and our nation are dysfunctional to the point of stalling out.

Meanwhile, we proles face a more immediate danger: How we are going to eat, what we are going to do if still more jobs are lost to us, and what chance do we have of attaining to or surviving through retirement if most of our savings go down the toilet?

At this point, it sure as hell doesn’t look good for yours truly: without a job and now too old to get a job, I depend on my savings and Social Security to live. SS covers less than half my living expenses. And the government forces me to take a “required minimum drawdown” from my IRA, which means enforced selling of shares at a time when I can’t get what they were worth a week ago. Fortunately, I don’t have to take that until later this year…but if memory serves, it took one helluva lot more than 10 or 12 months for the economy to recover from the Great Recession.

Mean-meanwhile, if my son loses  his job, he may very well lose his home. My house is paid for, but his decidedly is not. I can no longer afford to help him with the mortgage payments, which he took over quite some time back. If his father can’t fill the gap, he could very well be magnificently screwed.

What to do? If you still have a job, hang onto it but don’t assume you can do so for long. Make nice to the boss, rise and shine, but stash every spare penny into savings, build a side gig if you don’t already have one, and pay off as much debt as you can.

And for godsake, VOTE IN THE 2018 ELECTIONS.

In case you missed it:

“Trump was pitching the economic benefits of the GOP tax law in Cincinnati as the drop in the market intensified. The Dow fell 500 points while Trump touted rising wages and accused Democrats who refused to applaud him during the State of the Union of being ‘treasonous.’

“All three major cable networks showed the falling stock ticker on screen during Trump’s speech, and Fox News cut into his remarks when the Dow’s drop on the day hit 1,000.”