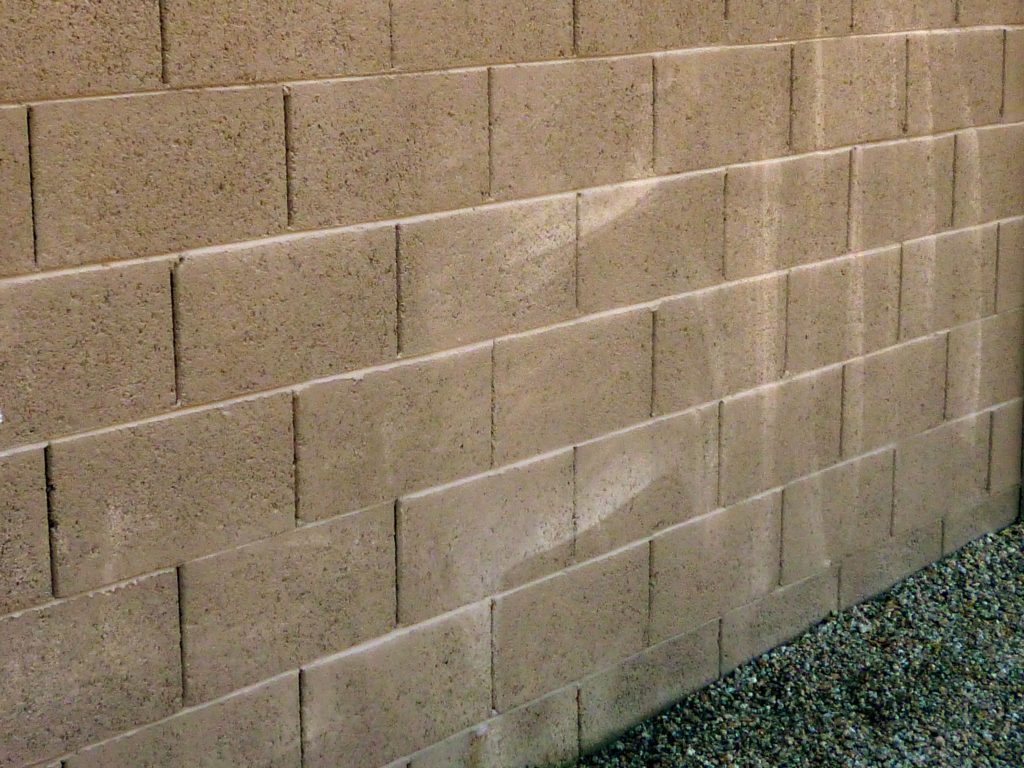 What looks like off-white streaking in this image was really a faint off-orange.

So naturally I caused the sky to clabber up yesterday by deciding that THIS WOULD BE THE DAY to paint that wall along ’Hood Lane West. Forthwith it began to threaten rain.

Undeterred, I soldiered on.

Manly Neighbor opined that if the weather would hold for two to four hours after the paint was applied, it’ll prob’ly be OK…assuming a hard rain didn’t fall…

Of course, Manly Neighbor assumed I could paint the wall in two hours, he being a guy. It actually took four hours, I being a girl. An old girl, at that.

You’ll recall I speculated that the painter,  lo these many years ago, had watered down the last of the exterior wall paint, having forgotten that I’d asked him to paint that wall and so not having enough to cover another 600 square feet, and the result was some streaks where thinner paint and been sprayed on it.

Dunno what’s wrong with the camera or with the Mac’s photo software. It’s not gray (as appeared in the link above): it’s a kind of nut brown. In this adjusted image you can see the stripes. The gravel is NOT blue-green, BTW…it’s about the same color as the wall.

Well, anyway…yeah. The “graffiti,” as we call the stripes, was Bila’s antic, OK, but not quite as simple or as “innocent” as assumed.

On the fly, I grabbed a VERY old paint brush to touch up spots that I couldn’t get with the roller. So I’m standing there filling in strangely colored grout lines and thinking, gee…what IS it about this graffiti-like paint color that seems so…familiar??

{ping!} THAT’s when I notice that some of the old paint stains on the ancient paintbrush are the same color as the orange-ish streaks on the wall. Those streaks are the same hideous tangerine orange that my former friend Elaine talked me in to applying to the hall/dining room wall and the accent wall in my office!

All of which was painted over years ago…

Here’s what Bila the Bosnian Painter must have done:

When I said “aren’t you going to paint that wall like I asked you to?” he must have realized he didn’t have enough paint, because he’d forgotten about that request and so hadn’t calculated the extra 600 s.f. into his purchase.

He certainly didn’t want to have to cover the cost of an extra gallon or two of “Baked Potato” acrylic from Dunn Edwards. So he poured whatever brown paint remained into his sprayer (probably wasn’t much: Dunn Edwards’ guys can calculate how much you need at the level of ounces per square inch!) and then, to stretch it so it would lay down a coat on that wall, dumped in the leftover hideous orange paint. Gave it a shake or two, and off he went!

LOL! It probably didn’t mix well — he would have been very tired by then and anxious to end the job, so wouldn’t have spent much time mixing the stuff up. Hence: stripes!

If I noticed at all, I would have figured it was just the uneven way water-based paint dries… But as a practical matter, the only time I thought anything about it was when I would drive past it. My memory doesn’t last much longer than it takes to get around the corner of ’Hood Lane and into the garage.

Welp, the wall has no more stripes.

The predicted rain held off overnight, and this morning the sun is shining. They say it’s supposed to rain this evening…which means I should have time between now and then to wash the car. 😉