Okay, okay…I admit: as a Techno-Crab of the first water, my crabbiness has gotten out of hand in the past few weeks. That notwithstanding, it’s refreshing to discover that Better Men and Women Than I also cast the occasional jaundiced eye upon the miracles of modern technology. Our friend Money Beagle, for example, reflects (in a much calmer tone than mine) upon the shortcomings of the smartphone. Ultimately, MB decides that despite a slew of aggravations, the smartphone is a kewl enough gadget.

But is it kewl enough to be worth $500 to $800? That’s the price range I saw in a quick web perusal this morning, ranging from refurbished iPhones to various Android devices. I dunno. That’s an awful lot of money. And I’m running out: don’t have enough cash in the bank, after the various major expenses, to keep me going until the next RMD in September or October.

Spiffikins comments, in a response to yesterday’s rant here at FaM, that as a practical matter all cell phones are required by law to be able to reach 911 — whether you subscribe to a service or not. So…that would mean that if you wanted to replace your land-line extensions with cells, you wouldn’t have to supply them with minutes at all: just keep the things charged up.

That IS an insight. The problem, of course, is that the reason you have extensions is so that you can answer the phone in whatever room you happen to be when someone jangles you up. If what you have is five different phones with five different phone numbers (or, if they’re not supplied with minutes, presumably NO phone numbers), then you would have to RUN to wherever you left your functioning, paid-for-service device at any given time. If you can remember where you left it…

Ooma (VoIP) begins to look better & better…now to find someone to help me figure out how to install it… The price is so low that I could probably afford a smartphone (someday) and still keep my antique set of base + four cordless handsets. 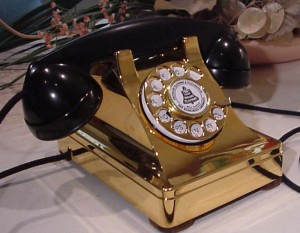