Ohhhh the techno-life just gets better and better!

You may recall my whinging a few days ago about Cox’s announcement that it’s taking down the copper connection to our land-line telephones, and that if we want to continue to have a land-line-like set of phones (i.e., a phone in every room), we’ll have to get Cox’s digital phone service, which is connected through one’s computer via a second modem to clutter up your desk. 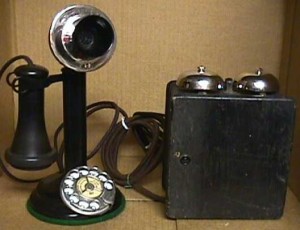 no phone. If the extra annoying modem goes down — no phone.

Sooooo…now we have three ways from Sunday for your phone to die. And say what? you need to call 911? Well ..|.. very much!

Ohhhkayyy, well there doesn’t seem to be much choice here. I can buy an Ooma modem and pay a guy $90 or $180 to come over and help my untechie self connect it to my computer and attach my call-blocker to it. Or I can have Cox come over and install its wondrous modem for free. And continue to gouge me $35 a month for less-than-optimal phone service.

I decide to opt for Cox despite the rip-off, because it’s at least sort of a known quantity. The lash-up was installed Wednesday.

I figure this is the robocaller SOBs doing a number on me. Hang up. Block the number. Pick up the phone and try to call another number, and when I do, I get the same racket. My phone has been taken over by a motorcycle on meth!

Now I walk across the street carrying one of the system’s handsets and call Cox from my neighbor’s phone. As usual, this entails a great hassle getting through the aggravating phone tree, but eventually I reach a very helpful tech guy.

He is beyond extremely nice and is anxious to help, but he has NEVER HEARD of what the phone is doing. But since my handset’s signal reaches all the way across the street and into my neighbor’s home, I dial up a phone number out of the device’s memory and get B-R-R-R-R-R-R-R-R-R…, which of course he can hear loud and clear. He tries to manipulate the modem from his end, but it’s not working.

I go back to my house and disconnect the call blocker, which is in-line with the modem. This does not help.

He arranges for a workman to show up here tomorrow morning — because after all what DOES the little woman have to do with her day than sit around waiting for yet another workman, eh?

Meanwhile, he suggests I try unplugging the modem, letting it set for 20 or 30 minutes, and then replugging and testing. This I do, with baleful results.

The phones are now completely nonfunctional. You can sometimes(!) get a dial tone and if you do, you can dial out, but within 30 seconds the meth-headed motorcycle starts back up again.

Okay, I’m willing to allow that maybe there’s something wrong with my phones. But I doubt it. LOL! Guess I should be glad this little fiasco hasn’t taken my computers down. Yet…

So it is now “tomorrow”: Saturday.

Right about as scheduled, a new Cox guy shows up. Actually, this one is not “new” but grizzled and road-worn. This is a fellow who has had long experience. Let us, I reflect, hope that most of his experience has to do with the electronics of telephone systems.

The guy is flummoxed by the motorcycle on meth serenade: admits he’s never heard anything like it. He tests every piece of equipment on the line. He discovers an outmoded DSL connector, which he tosses. So far: nothing works. What, he asks, is really connected to this line, amongst the 6 handsets I say I have online???

Finally we figured out that the problem is the old Panasonic base, which for reasons unknown continued to operate after I plugged in then five-handset Uniden base with which I intended to replace it. Long as it was working, I just left it sitting there, giving me a 6th phone. Very convenient.

Upon examination, we realized the reason it was working was that it wasn’t really talking to the Uniden. It was plugged into the copper wiring, and so was ringing on its own: not as a de-facto sixth handset, but as an entirely separate unit. That thing, he theorized, could be causing a short.

Interestingly, the copper wiring has been disconnected and none of the outlets work anymore. Yet…wait…that phone does have a dial tone. Wot the hell?! We unplug it, and damned it that doesn’t work!

So now the phone system is working. I’m down one handset in a location close to the floor, where I might reach it if I fall and hurt myself. Fortunately, one of the Uniden handsets was in a location where I rarely go, and so I just moved it into the family room, where…yea verily, I can crawl to it if I fall in the kitchen, dining room, or family room. I hope.

Once again, then, all is well in the Brave New World. For the nonce…