Hot dang! Costco’s move to annoying CitiGroup is going to cut my monthly Costco budget at least in half, and maybe by as much as three-fourths!

Remember how much I guessed I’d have to spend on today’s Costco junket, to pick up meat for the dogs and a few things for myself that I can’t easily find elsewhere? It was ridiculous, as you’ll recall — I guessed that the giant packages of chicken and the pork would each cost about 30 bucks; $15 for the restaurant-sized package of frozen veggies; maybe $10 per package of Campari tomatoes and of Mexican mangoes.

Now, I did expend the $95 projected for this trip, but only because for the first time since the memory of Fat Lady runneth not to the contrary, the store happened to have a pair of white Gloria Vanderbilt jeans in size 10.

It has literally been years since any of the Costco stores I habituate has had a size 10 pair of Glorias that fit, in white. I know, because every goddamn time I go into one of those stores, I search for them. So, add $14.99: come up with a total, including tax, of $94.23. 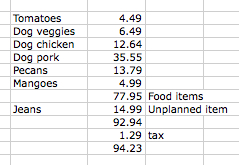 This means the real cost of buying only the food items needed for this trip was about $77.

You realize…that’s about half the $150/month dedicated to Costco in the new budget.

And, since the amount budgeted for Costco shopping in the New Regime is itself half the average I found I’ve been spending of late, $77 is a little more than a quarter of the amount I’ve been diddling away in Costco.

A 75% saving on household goods, food, and (monumental) impulse buys, just because Costco switched from AMEX to the dreadful, impossible CitiGroup as vendor for their in-house credit card.

Their loss, my gain.

I must say, I’d forgotten how annoying and stress-inducing it is to have to write a check while standing in line at a cash register. It’s been a long time since I’ve paid for anything with anything other than a credit card or direct bill-pay.

Shopping at Costco is aversive to start with. It’s crowded, the lines are endless, the insulting shoplift check at the door makes you want to bite someone…ugh. That’s exaggerated at the store nearest to me by cultural issues having to do with personal space: for a middle-class white American female, it really isn’t a very comfortable place to shop.  That’s why, whenever I can swing it, I’ll shop Costco in other parts of town. Not that I don’t love my fellow shoppers, but that I really do dislike people climbing up my rear end or parking their carts crosswise across the aisle so I have to turn around, go all the way to the start of the aisle, go all the way down the next aisle, and then come halfway back into the original aisle to get to the merchandise I want to buy.

Sociologically it’s interesting and amusing; time-wise and patience-wise, it ain’t.

So add to that the slight — but significant — extra hassle of having to write a check, and I find myself thinking “no, thanks.”

I’ve paid my Costco membership for this year. We will see if it seems like a $50 fee for the privilege of shopping there is worth paying.

The truth is, the things I can’t easily get anyplace else — a whole package of those wonderful mangoes; massive amounts of chicken, pork, and appropriate veggies suitable for processing into dog food; giant packages of high-quality pecans, walnuts, and pine nuts; lifetime supplies of paper goods; the incredible maple syrup at the incredible price; the smokin’ deal on gasoline; the beloved tire shop; the cheap propane — may not really add up to $50 worth of easy shopping or $50 worth of savings on gas and junk.

At any rate, given the hassle involved in writing checks and the general PITA it is to shop there under the best of conditions, you may be sure I won’t be running into Costco every time the whim strikes: not anymore.