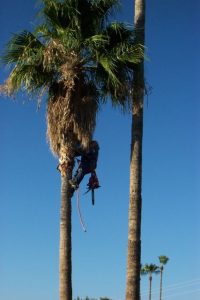 So once again Harvey the Hayward Pool Cleaner has choked on a palm-tree seed, and I’ve dragged him (and myself…) up to the Leslie’s Pools store to be dissected, cleaned out, and put back together.

This process is free, but it’s a time-consuming nuisance.

After the palm trees favored in our parts have flowered (these are not date palms), they drop hundreds and hundreds of hard, BB-like black seeds. Right into the pool. Every time the wind blows. Every time it rains.

These BB’s can jam Harvey’s spinning innards, which are propelled by the force of water being sucked through the pool’s filter and pump. When that happens, Harvey comes to a dead stop, and no further pool cleaning gets done. Leslie’s will take him apart, remove the offending bead or beads, and put him back together.

Drag Harvey home, drop him back in the pool, slide the hose into the water so it fills up by displacing all the air in it, repeat. Repeat. Repeat.

The fourth guy, bored, struck up a desultory conversation, during which I remarked that Harvey had choked on a palm-tree BB.

Now, this guy was an actual, living, breathing pool guy. In addition to fleecing the hoi polloi, Leslie’s does a to-the-trade business, providing deep discounts to people who can prove they’re pro’s. 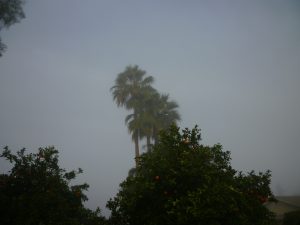 “You know,” says he, “you can fix that, most of the time, by turning the cleaner upside down and giving it a sharp shake.”

I flip Harvey over and shake him a couple of times, and POP! Out comes the offending seed. It bounces across the floor.

“Now,” says my informant, “you stick your finger in here and see if this thing will move around.” This thing is some kind of rotor device that resides just inside the hose connection. He demonstrates.

Then he flips the gadget back over.

“He needs new feet,” he says. It’s amazing how the “Harvey” conceit is contagious. Call the thing “Harvey the Hayward Pool Cleaner” and the next thing you know, everyone is calling it “him.” 😀  “And new wings.”

He then proceeds to advise on how to replace the wings, and, soto voce, suggests buying these parts from Amazon, where (as anyone who knows anything about Leslie’s knows…), they’re much cheaper.

Okay. Sooo…. I slip out the door while our cute young sales clerk is still occupied with Customer No. 1. I’m skeptical about this, but…figure it can’t hurt to schlep Harvey home and try him out.

Drag him into the house. Lash him back up to his hose. Drop him in the drink. A-N-N-N-N-D….

Harvey has not shot around the pool like that since I had the puddle resurfaced!

I figured his sluggish pace was caused by the coarse, annoying quality of the PebbleSheen. But apparently not!

Two, three hours have passed, and Harvey is still going strong. He does still get hung up on the hateful new Save-the-Proles-from-Themselves drain covers, but instead of staying stuck until I come along and bump him loose, after a minute or two he manages to work himself free.

So I’m going to order the wings from Amazon, and maybe the feet, too — especially if I can find change-’em-out instructions on YouTube. Like, ohhh, say, this one…

Whoever that guy was, he not only saved me a whole lot of time (going forward), but he also saved me a bundle of dough.

I had grown so tired of the repeated junkets to Leslie’s — once every two or three days, during the seed-shedding season — that I’d decided to buy one of the newer Hayward cleaners that runs on wheels. These allegedly can handle the stupid new drain covers and also supposedly suffer less wear on the abrasive PebbleSheen surface. Planned to keep Harvey as a back-up, knowing this new thing will probably gag on palm BBs, too. Thing is…these gadgets cost FOUR HUNDRED AND EIGHT DOLLAH.

At Amazon. Probably more than that at Leslie’s.

Well. Mr. Stranger Man not only showed me a 30-second fix for Harvey, he also (silently) demonstrated that once actually fixed, Harvey runs as well on that PebbleSheen gunk as he did on the old-fashioned nice, smooth plaster!

Of course, sooner or later Harvey will wear out. But when he does, his replacement will only be about $300, not $400+ for the wheelie model. 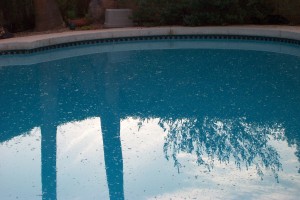 Meanwhile, I may not have to trim the accursed palm trees at all. Two or three years ago, to Gerardo’s chagrin, I stopped hiring him (or anyone) to climb up there and cut the previous year’s dead growth off. This, because Gerardo decided to schedule this job smack in the middle of the birds’ nesting season. Those palm trees host dozens of birds. One wants those birds up there, because they eat the cockroaches that spawn in goddamn palm trees, and they eat the cockroach grubs that fall in the pool all spring, and they clear out ants at the first sign of a new colony. Because of those birds, I have no roaches, no ants, and precious few other pests.

Well, when Gerardo’s guys barged up there and hacked back the trees, they dumped the nests full of baby birds on the ground.

When I went out there, I found dead baby chicks all over the KoolDeck, and mother birds flying around crying out in despair. Alllll day long.

Lest you think birds do not feel emotions…lest you imagine birds feel no grief, no despair: think again.

That makes them very messy, very VERY much a nuisance. To me and to the neighbors and to anyone who drives a car up the road behind the house during the windy season.

This is a question whose answer has long escaped me: Why do white people have such a fascination with palm trees?????????

What in the name of Heaven and Hell about palm trees so enchants the gringos? They make no shade. They’re ugly as an old stick in the ground. They make no dates. Certainly no coconuts. The only crop these Arizona palms produce is debris!

They’re expensive to maintain — it costs several hundred dollars to have Gerardo’s guys trim the damn things every spring. They attract lightning. They breed cockroaches. And desert termites. And black widows. And roof rats. At least in Arabia the palm trees produced dates — matter of fact, that and millet were our area’s main crops. But these BB-fruiting things? All the way around, they’re useless, uglee, and nuisancey.

Why, White Man? What is it about these things that you find so charming?

I should have them taken out. But you don’t even want to know what it would cost to have someone come and cut them down. The neighbor across the street has been extirpating his, but he can only afford to remove one or two at a time. It will take several years to clear his yard of the things. At that rate, too, it would take four years to get rid of mine.

Is it worth the trouble?

Somehow, I suspect not.